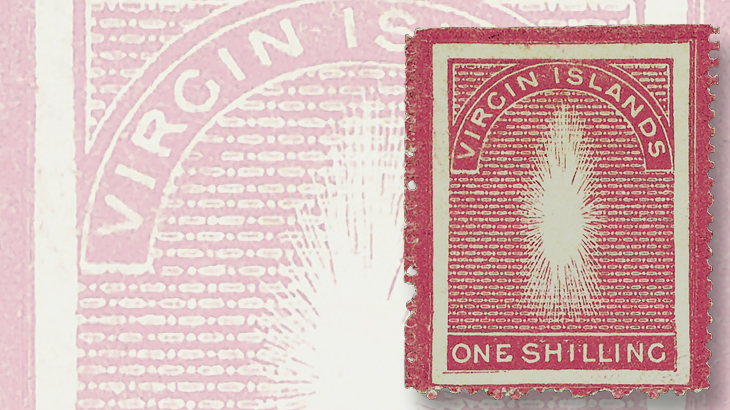 The Virgin Islands 1867 1-shilling black and rose stamp (Scott 8c) with the central figure of St. Ursula missing, known to collectors as the “Missing Virgin.”

The vignette of the normal stamp has the figure of St. Ursula printed in black against a rose background. The variety is listed as No. 8c in the Scott catalogs.

As Klug explains, on Christopher Columbus’ second voyage to the Americas in 1493, he named the area now known as the British Virgin Islands in honor of the legend of the martyr St. Ursula. The legend behind St. Ursula is that she and her 11,000 virgin handmaidens were murdered by Huns.

I am intrigued by this variety. The stamp is described in Vol. 2 of the Scott Standard Postage Stamp Catalogue and the Scott Classic Specialized Catalogue of Stamps and Covers 1840-1940 as “central figure omitted,” but stamp collectors know it better by its nickname, “Missing Virgin.”

Controversy has surrounded the stamp. Fewer than 10 examples, and possibly as few as three, exist.

In Vol. 6 of Robson Lowe’s The Encyclopedia of British Empire Postage Stamps 1639-1952: The Leeward Islands, Lowe stated that only six examples exist. He believed them to be proofs.

Simon Goldblatt, in An Album of Rare Stamps, wrote that eight stamps had been identified.

In the Specialised Stamp Catalogue of the British Virgin Islands 1787-2001 Including Postal History and Cancellations, edited by Giorgio Migliavacca, three positions are pictured: positions 2, 4, and 9.

All known examples have perforations cut with scissors, with the perfs trimmed off on one or two sides.

Position 2 is the example from the Chartwell collection that was auctioned by Spink in London in 2011 for a winning bid of $229,778 (including the 20 percent buyer’s premium Spink adds to lots).

Position 4, the only known example of the stamp with original gum, sold for $170,000 (including the 20 percent buyer’s premium) at a David Feldman auction in Geneva in December 2015.

Position 9 is in the Royal Philatelic Collection, the collection of Queen Elizabeth II.

Opinions vary on how the stamp came about. Some say it is a genuine error. Others are convinced that it is a proof or from a perforation trial sheet.

Regardless of its status, the stamp is a stunning rarity that seldom comes on the market.