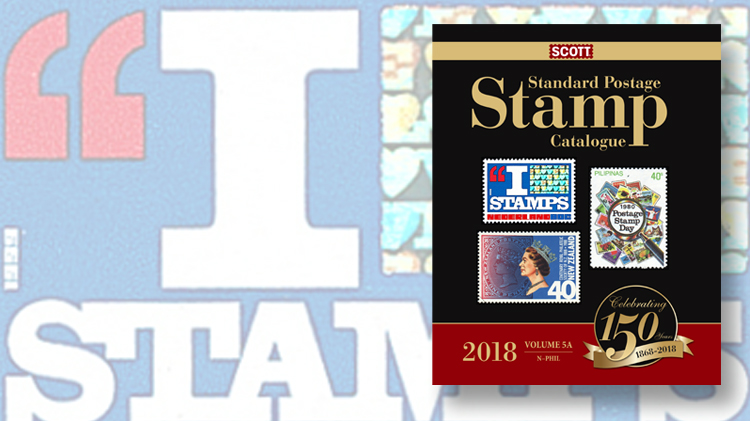 Vols. 5A (countries of the world N-Phil) and 5B (Pit-Sam) of the 2018 Scott Standard Postage Stamp Catalogue are now available.

The Scott catalog has come a long way since its humble beginnings in 1868 as a 24-page bound pamphlet. The Scott Standard Postage Stamp Catalogue lists more than 700,000 stamps from more than 600 stamp-issuing entities. Because the catalog volumes had grown so large that they were literally bursting at the seams, each 2018 Scott Standard catalog has been split into two volumes, A and B. The 2018 Vols. 5A (countries of the world N-Phil) and 5B (Pit-Sam countries) are now available.

Almost 4,400 value changes occur among the listings for the Philippines. Scattered value changes can be found in the classic period, with a mix of increases and decreases. The 1863 2-real blue stamp (Scott 17) doubles in value, from $1,000 used to $2,000. The value for an unused example remains unchanged at $650. More than 4,300 value changes were made during a line-by-line review of the period from 1945 to date, resulting in mostly increases throughout. The 2014 35-peso stamp honoring the Main Post Office in Manila (3517) climbs in value, from $2.75 mint and used to $3.50 both ways.

Several increases are found among the value changes for New Guinea stamps.

Namibia received a thorough review, resulting in more than 700 value changes. The changes reflect a general weakening of the market for this southwest African nation.

A few value increases are sprinkled among the modern issues of New Caledonia, although value decreases also occur. Almost 675 value changes were made to the listings of this South Pacific island.

Throughout Vols. 5A and 5B, various notes and footnotes have been clarified or expanded to further explain complicated listings. Other notes have been screened carefully to ensure accuracy.

Numerous minor varieties and footnotes were added to the listings of the Philippines.

Perforation varieties were added to the early Issues of Niue, an island in the South Pacific Ocean, northeast of New Zealand.

Many new values have been added to the listings for Qatar stamps where dashes previously indicated values were difficult to determine. The imperforate souvenir sheets issued for the 1966 World Cup Soccer Championships in London (Scott 107H-107L) are now valued at $50 each, both mint and used.

Scattered value changes are found throughout the catalog listings for St. Thomas and Prince Island.

A few values were updated among the listings of St. Kitts-Nevis. All value changes reflect slight increases.