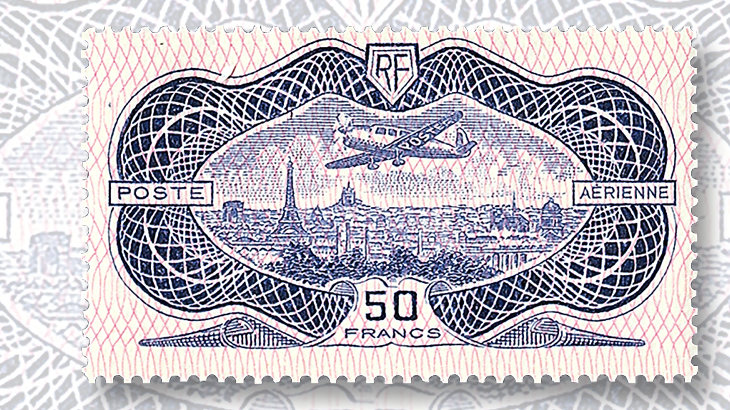 The red burelage design of the paper used for this 1936 50-franc airmail issue of France is plain to see in the area outside the vignette. 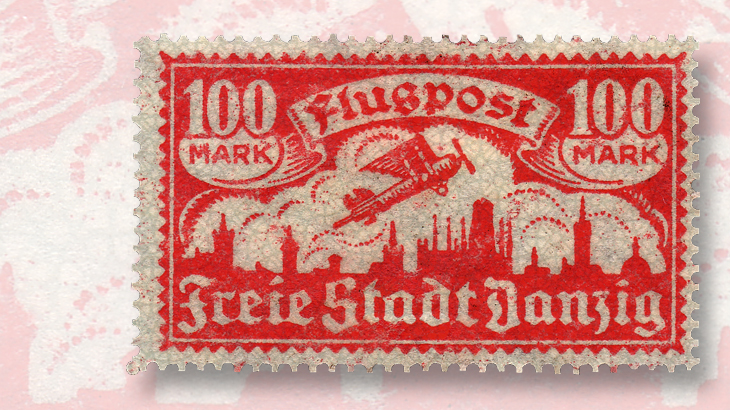 A 1923 airmail stamp from Danzig was one of several issues at the time printed on paper with a gray network or burelage effect. 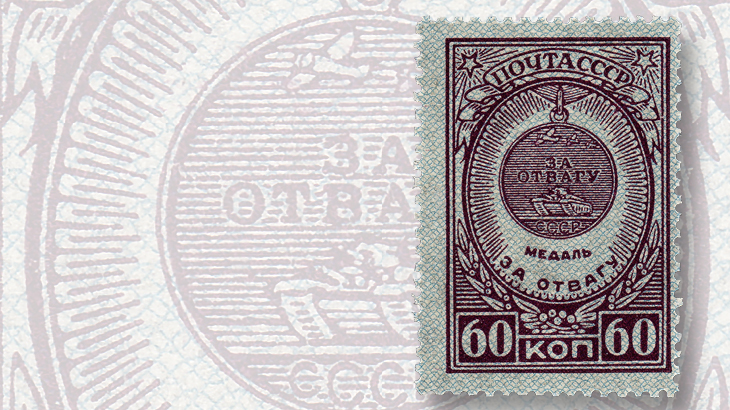 One from several sets of stamps of Russia in 1946 depicting medals for various meritorious acts, this 60-kopeck stamp (Scott 1046) was printed in dark violet ink with blue burelage. The medal shown is awarded for bravery. 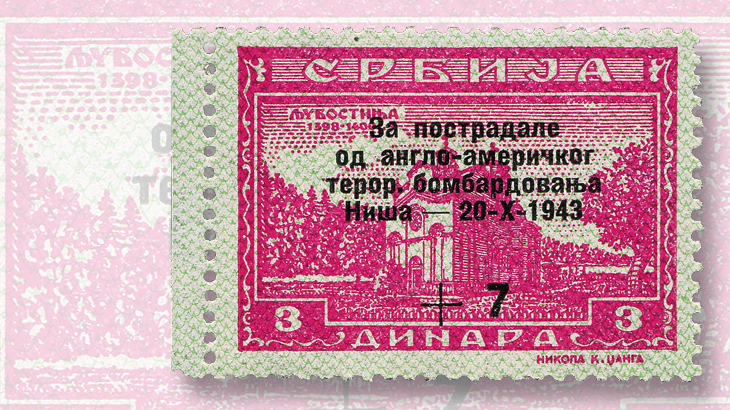 This 1943 semipostal stamp from Serbia under German occupation has green burelage on the paper, which is not easy to see with the vivid color of the stamp. 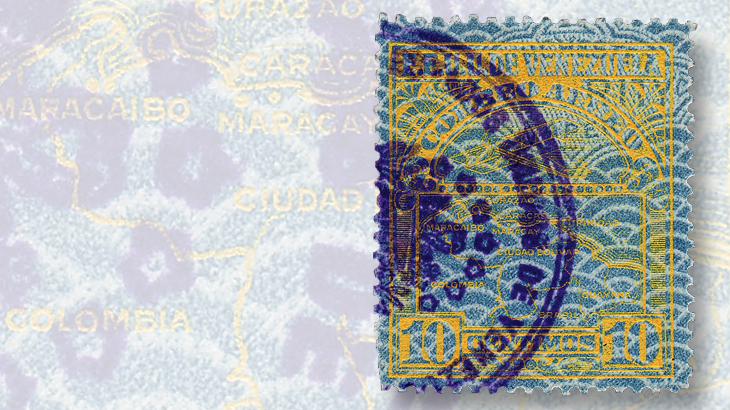 Security paper intended for the printing of banknotes was used for this Venezuela airmail issue in 1932. 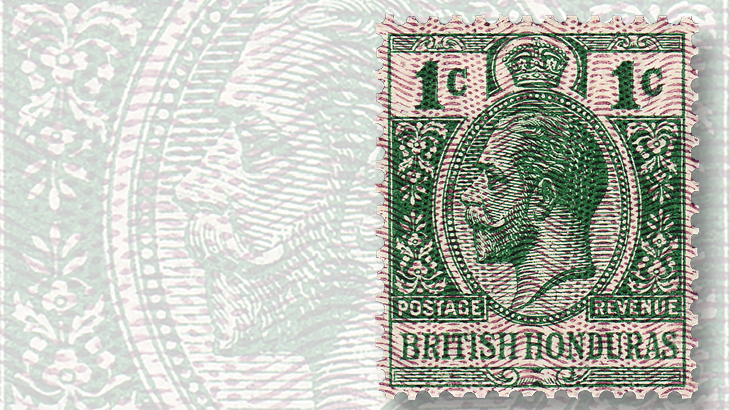 In 1915, this British Honduras stamp portraying King George V was printed with a moire overprint in violet.
Previous
Next

Unused postage stamps are considered to be “accountable paper,” defined by the United States Postal Service as “Paper in a postal facility that holds monetary value and must be accounted for, including postage stock,” along with a short list of other postal inventory items.

Stamp images that are replicated in some way and then pasted onto a letter or parcel in the guise of real postage constitute forgeries.

It would cheat the postal system if the forged stamps are not caught and withdrawn from the mailstream. Postal services are businesses that need the revenue from the stamps they sell in order to pay wages for postal workers, overhead expenses, and the costs of delivering the mail.

Two different terms with French origins — burelage and moire — are used to describe these methods and often are used interchangeably.

[Editor’s note: Burelage is commonly pronounced BUR-uh-lazh; moire is often pronounced mwa-RAY or mo-RAY, but other pronunciations are also heard.]

Burelage is defined as a fine intricate pattern of lines or dots printed on the face or back of stamp paper as protection against counterfeiting or the cleaning and reuse of the stamp.

Moire is more simply described as a pattern that looks like watered silk with rippled wavy lines.

These similar methods have been used on stamps printed on paper that is not watermarked.

Stamps with burelage and moire are fun to find and to collect. The first illustration shows burelage printed in green on a semipostal stamp from Serbia (Scott 2NB35) issued in 1943, when Serbia was occupied by Germany. The 7-dinar surtax was collected to aid bombing victims.

Under good magnification, the burelage is revealed as having been printed on top of the stamp image. Several other Serbian stamps were printed with burelage during the German occupation.

Trying to make a stamp look like watered silk with rippled wavy lines is not quite as simple to accomplish as a burelage overprint, and moire is found less often on postage stamps.

A violet moire overprint on a British Honduras 1¢ King George V stamp issued in 1915 (Scott 85) is shown in the second picture. It takes a bit of staring at the stamp before the moire begins to look like watered silk, but suddenly the wavy lines will seem to show a silky appearance.

The British Honduras 1¢ moire stamp also was overprinted “WAR” and served as a war tax stamp during World War I (Scott MR1).

In 1946, Russia issued a handsome set of 15 stamps (Scott 1032-1046) picturing a variety of medals for meritorious service. The Scott Standard Postage Stamp Catalogue indicates that these stamps have “paper with network” and lists the network (burelage) color for each stamp in parentheses; for example, Scott 1032, “60k myrtle green (green).”

Danzig issued a number of stamps in the early 1920s that are listed in the Scott Standard catalog as being printed on “paper with gray network” or “faint gray network.” A close-up of a Danzig airmail stamp issued in 1923, Scott C19, reveals the gray network appearing as a burelage pattern with images resembling complex wagon wheels.

Queensland issued a ½-penny stamp (Scott 101) in 1895 on unwatermarked paper with an intricately designed vertical strip printed on the reverse of the stamp. A 1d stamp (102) received the same design on its back. Scott lists these two issues as having moire on the back, while the Australian Commonwealth Specialists’ Catalogue refers to it as burele, which is the adjectival form of the noun burelage.

In the 1930s, Waterlow & Sons, Ltd., in London, printed some stamps for Venezuela (Scott 293-304 and C17-C40) on bluish Winchester security paper that the firm used for printing banknotes. The blue was in a burelage pattern.

The pattern was created as part of the paper during its manufacture, so the stamp image is printed on top of the visible pattern of arcs, giving the stamps a rather dark and strange look. The stamp image can appear to be overwhelmed by the burelage, and a postmark makes the visual effect even worse.

France issued a magnificent airmail stamp in 1936 (Scott C15). The primary image of the stamp is printed in blue and shows a monoplane flying over Paris, within an ornate frame. The background clearly shows the stamp’s “paper with red network overprint” as the Scott Standard catalog identifies it, or “a rose burelage,” as described in the Yvert & Tellier Catalogue de Timbres-Poste.

The more we explore moire or burelage, the more it seems that while the technique may have been intended as a security device for stamps, it now means an interesting visual element for collectors to watch for and enjoy.