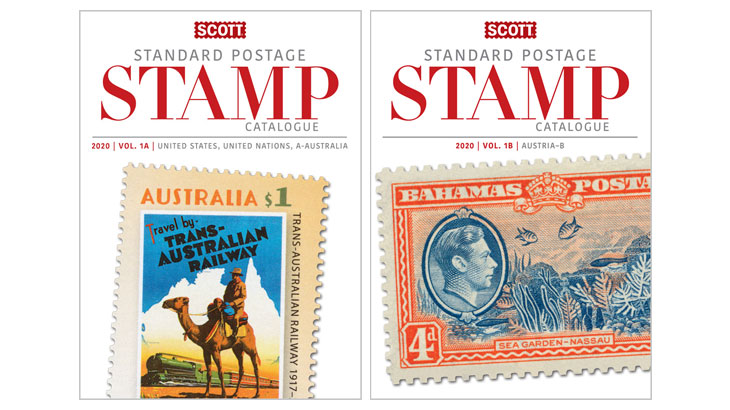 Volumes 1A (United States, United Nations, countries of the world A through Australia) and 1B (countries Austria through B) of the 2020 Scott Standard Postage Stamp Catalogue are now available for purchase.

Another catalog season is upon us as we continue the journey of the 151-year history of the Scott catalogs. The 2020 volumes are the 176th edition of the Scott Standard Postage Stamp Catalogue. Vol. 1A includes listings for the United States, United Nations, and countries of the world Aden through Australia. Listings forAustria through B countries of the world can be found in Vol. 1B.

Although almost three times as many value changes for the United States were made in Vol. 1A of the 2020 Scott Standard catalog compared to the number of changes made in the 2019 Vol. 1A, the general pattern throughout shows a “steady as she goes” result, with stamps in very fine grade consistently selling at or close to Scott values. A majority of the value changes occurred among more recent issues, to reflect increasing values of forever stamps.

Auction results from the first Robert A. Siegel Auction Galleries sale of the William H. Gross U.S. collection impacted just three listings. The Annapolis, Md., 5¢ postmaster’s provisional (Scott 2XU1), one of two recorded (both used and very fine), drops in catalog value to $500,000, from $600,000 in the 2019 catalog.

A second change in value because of the Gross auction resulted from the sale of the finer of the two known covers bearing single examples of the 1908 2¢ Washington coil stamp (Scott 321). No singles off cover, either unused or used, are recorded. This great rarity moves up in value to $300,000, from $250,000 in the 2019 catalog.

Australia received a thorough review, resulting in a drop in used values for many issues.

A review of Argentina resulted in increases overall. Some increases were modest, but topical sets had larger increases.

Belgium stamps issued after 1930 received a thorough review. Special attention was given to back-of-the-book issues, where selected values showed substantial increases and decreases. The 1895-1909 Numeral postage due set of nine (Scott J3-J11) in mint never-hinged condition increased from $175 in the 2019 catalog to $225.

For Brazil, the editors focused on stamps issued after 1990. Several 2000-04 issues increased in value.

Editorial enhancements for Vol. 1B

Several modern stamps from Burkina Faso, previously with dashed values, are valued for the first time in the 2020 catalog. Also, 54 new surcharge varieties were added to the Benin listings.