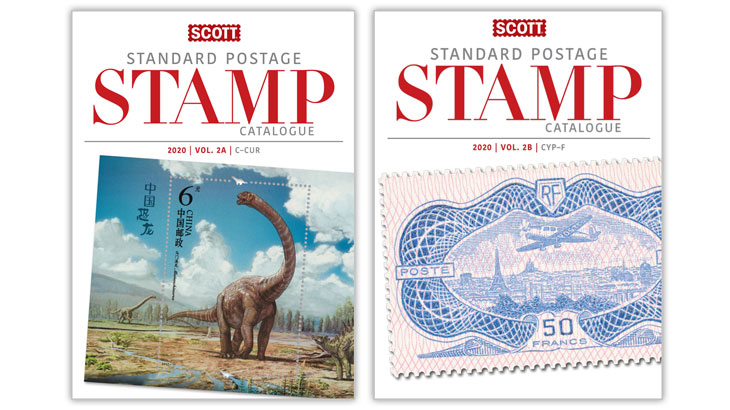 Vol. 2A (countries of the world Cambodia through Curacao) and Vol. 2B (Cyprus through F countries) of the 2020 Scott Standard Postage Stamp Catalogue are now available for purchase.

Another catalog season is upon us as we continue the journey of the 151-year history of the Scott catalogs. The 2020 volumes are the 176th edition of the Scott Standard Postage Stamp Catalogue. Vol. 2A includes listings for countries of the world Cambodia through Curacao. Listings for Cyprus through F countries of the world can be found in Vol. 2B.

For Canadian stamps, currency conversion rates played a role in influencing value changes in this edition. For the 2019 catalog season, values were influenced by the Canadian dollar, with a conversion rate of 80½¢ on the United States dollar. For the 2020 Vol. 2A, the Canadian dollar dropped to 75¢ against a stronger U.S. dollar. Thus, all catalog values based on face value — most modern Canadian stamps — were lowered. Nondenominated (85¢) permanent stamps are now valued at $1.30 in the 2020 Scott Vol. 2A catalog. Many other Canadian stamps were similarly affected.

Modern Canada error stamps fared poorly in sales during the past year. As a result, many catalog values dropped for 2020. The currency situation was a minor factor in the drop.

On the upside, some pence issues in Canadian provinces saw gains. New Brunswick’s quartered stamps used on cover (Scott 2c, 3b and 4b) saw significant gains in value, as did Prince Edward Island bisects on cover. A few Newfoundland stamps, unused and used, also rose in value.

Most of the value changes in Canada were slight decreases. In general, the weaknesses we see in the U.S. market also are seen in the Canadian market, only more so.

A mixed bag of ups and downs were recorded for classic stamps of Cape Verde. Values for modern stamps issued after 2000 reflect increases overall.

Stamps of China from all time periods were reviewed. More than 600 value changes were noted, with significant jumps for the early large Dragons issues.

The market for the Republic of China continues to receive a watchful eye from the Scott editors, with mixed value increases and decreases recorded. Hundreds of value changes were made for stamps issued prior to 1970.

Cambodia received attention; the hundreds of value changes indicate the market across all time periods is weak. Selected souvenir sheets showed modest increases. Three souvenir sheets of the 1951-52 first series (Scott 15a, 16a and 17a) advanced from $50 each in 2019 to $52.50 each in the 2020 edition.

Nine new errors appear in the 2020 Vol. 2A Canada listings. Eight of these involve omitted perforations. The one exception is Scott 2052a, a horizontal pair of the 2004 round Canadian Open Golf Championship stamps, with silver omitted on both stamps, valued mint never-hinged at $2,250 in italics.

A major enhancement in the People’s Republic of China listings was the addition of China Post number references throughout.

Cyrenaica and Dalmatia both received thorough revisions of values, with mostly decreases noted.

In Egypt, the 50-millieme Aswan High Dam imperforate souvenir sheet, previously footnoted below the 10m Land Reclamation stamp (Scott 628), has been elevated to a major listing, 628A.