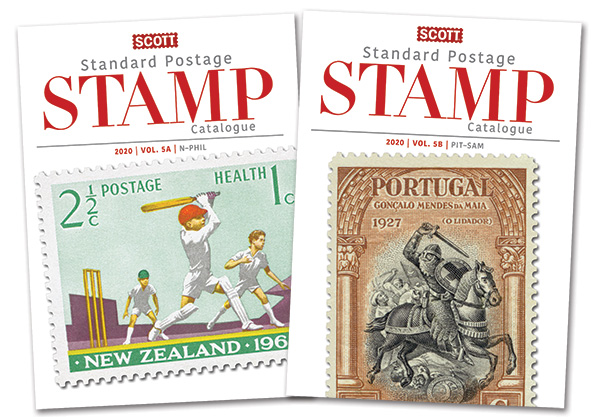 Vol. 5A (countries of the world N through Philippines) and Vol. 5B (Pitcairn Islands through Samoa) of the 2020 Scott Standard Postage Stamp Catalogue are now available for purchase.

Another catalog season is upon us as we continue the journey of the 151-year history of the Scott catalogs. The 2020 volumes are the 176th edition of the Scott Standard Postage Stamp Catalogue. Vol. 5A includes listings for countries of the world N through Philippines. Listings for countries of the world beginning with the Pitcairn Islands through Samoa can be found in Vol. 5B.

Frequent users of the catalogs may notice a new look for the covers. Highlighted are single stamps from a postal entity found in that catalog. The Vol. 5A catalog features the 1969 New Zealand 2½¢+1¢ Boys Playing Cricket semipostal stamp (Scott B77).

A review of all modern postage and back-of-the-book issues for Nevis resulted in almost 1,000 value changes. Both increases and decreases are noted throughout, with select topical issues generally showing a modest bump up in value. Typical is the Tropical Fish set issued March 27, 2000 (Scott 1187-1194), which moves from $26 mint and used in the 2019 catalog to $27.50 both ways this year.

New Zealand received a watchful eye, with approximately 1,600 value changes reflecting a mix of increases and decreases. Interest in the 1920 Victory set of six necessitated an increase in value. This set of commemoratives from the reign of King George V (Scott 165-170) advanced from $68.25 unused and $93.95 used, to $90.50 and $101.20, respectively.

The stamps of Nicaragua saw approximately 250 value changes, with increases noted on stamps issued around the year 2000. The 1996 Summer Olympic Games souvenir sheet set of two (Scott 2174-2175) increased from $13.50 mint never-hinged and used in 2019 to $20 both ways this year. Values were assigned for the first time to two recent issues. The 2002 Friendship Between Nicaragua and People’s Republic of China souvenir sheet (Scott 2382) is now valued at $2 mint and used, and the 2011 Central American Parliament 20th Anniversary stamp (2521) is newly valued at $3 mint and used.

A mixture of increases and decreases is seen among the 1,034 value changes recorded for Niger. In general, movement in either direction is minimal, which indicates the market for Niger is quiet. Going against this trend is a small number of issues from 2004-06 that jumped noticeably in value. The 2006 set of three paying tribute to writer Boubou Hama (Scott 1101-1103) is now valued at $10 mint and used, up from $3.50 both ways in the 2019 catalog. These values are italicized because limited market data was available to the editors.

Small decreases characterize most of the 671 value changes in Papua New Guinea. Scattered increases are seen for modern used stamps. Be sure to review the 1995 thick “t” and thin “t” surcharges (Scott 876-878D), which rise noticeably in value. The seven-stamp set in mint condition soars from $35 in 2019 to $100 this year. These new values are italicized to indicate that the editors had limited market data available.

Editorial enhancements for Volume 5A

Overprint varieties have been added to the Nicaragua listings for nine different stamp issues from 1980.

An even 1,000 value changes are recorded for St. Thomas and Prince Islands. Gentle declines of 10 percent or so are the rule, but a handful of 2003 issues rise modestly in value. The Marilyn Monroe and Orchids sheet of six (Scott 1481) gets a $1 bump up, from $9 mint and used in 2019 to $10 both ways this year. Overall, the market for this country is rather flat.

Values increased slightly for stamps of El Salvador issued between 1998 and 2012. One of the more substantial increases was for the set of two 2001 25th Anniversary of Saburo Hirao Park stamps (Scott 1548-1549), which rose from $17 to $23 in both mint and used condition.

A few pricier issues from Qatar increased further in value. For example, the 1965 10-riyal Saddleback Butterflyfish stamp (Scott 85) increased from $90 mint to $95. Additionally, a new value in italics, $35, replaced a dashed value for the strip of five 1966 1-rupee Pan Arab Games stamps (90a) in mint condition.

Editorial enhancements for Volume 5B

Collectors of the Trucial States will notice 461 new major listings for Ras Al Khaima, bringing the listings through the end of 1970. Hundreds of additional items are footnoted with current values. Many of the issue dates are published for the first time in the philatelic literature.

Be sure to review the St. Thomas and Prince Islands listings, which include 50 new surcharge varieties. The stamps show fruit and birds and were issued in the late 1990s using stamps from the 1980s.