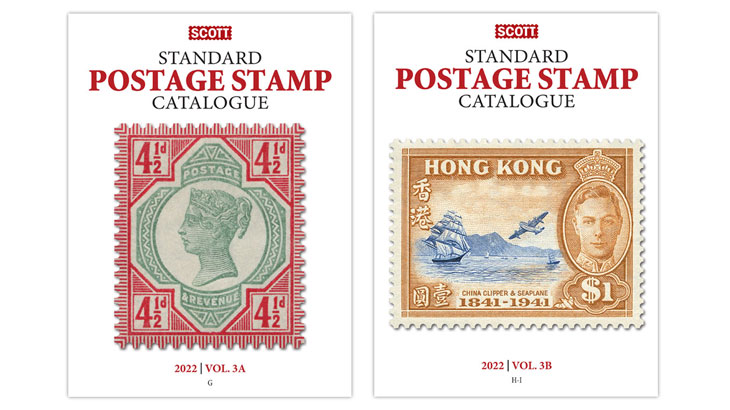 Vol. 3A (countries of the world with names that begin with the letter G) and Vol. 3B (H through I countries) of the 2021 Scott Standard Postage Stamp Catalogue are now available for purchase.

Another catalog season is upon us as we continue the journey of the 153-year history of the Scott catalogs. The 2022 volumes are the 178th edition of the Scott Standard Postage Stamp Catalogue. Volume 3A includes listings for countries of the world beginning with the letter G. Listings for countries of the world H through I can be found in Volume 3B.

Because Vol. 3B is a continuation of the first part of the Vol. 3 catalog, the introduction pages are not repeated in each volume this year.

A couple of substantial editorial enhancements for the Vol. 3 catalogs are worth noting. The first is the addition of many perforated and handstamped Official stamps as major numbers in the Official stamp section of the listings for Guatemala. These stamps have an interesting story. The note introducing the listings reads, “By a 1912 decree, all external mail sent from government offices in the capital was to be franked with regular stamps perforated ‘OFICIAL.’

“... The perforating device was damaged in the earthquakes of 1917-18, and it was sent to England for repair. An attempt to use regular stamps met with substantial pilferage, leading to the use of an OFICIAL handstamp pending the return of the repaired perforator in 1924.”

The second item relates to changes in the listings of India’s first issues that originally appeared in the 2021 Scott Classic Specialized Catalogue of Stamps and Covers 1840-1940. In that catalog, a special feature article by Sergio Sismondo titled “Identifying India’s first stamp issue by die type and head type” explored these early issues and resulted in some new numbers and reorganization. See the number changes list in this catalog for what specifically changed for the Scott Standard catalog listings.

Latin American stamps seem to be enjoying added interest recently. The Scott editors reviewed Haiti and made approximately 150 changes. This country will continue to receive a watchful eye. One stamp of note was the 5-centime General Louis Etienne Felicite Salomon stamp (Scott 24) that moved from $50 to $60 in unused condition.

Stamps of Honduras and Guatemala were also reviewed, and approximately 200 changes were made between the two countries. One standout set was the 1999 Honduras Red Cross set of six stamps surcharged in gold (Scott 387-392), which increased from $14.40 to $25.85 in unused condition.

A significant amount of attention was paid to the Great Britain Offices Abroad listings for offices in Africa, China and the Turkish Empire. More than 900 value changes were made to stamps in this section. The result was a large number of increases, especially for used issues in these areas. For example, the Great Britain Offices Abroad-Morocco 1935-37 set surcharged in Spanish currency (Scott 71-77) increased from $44.90 to $72.30 in used condition. The values are shown in italics to indicate that the stamps do not trade frequently in the marketplace.

A footnote added at the end of the Great Britain Offices Abroad-Turkey listings calls attention to the listing for Scott 55a. The Scott editors consider this stamp to be questionable and desire more information about it.

Great Britain was also reviewed, with approximately 100 value changes made; these were increases for the most part. The editors continue to monitor the currency situation, which was not consistent in 2020. The same holds true for Israel, where a handful of changes were made and the currency there continues to fluctuate.

This catalog season we are also taking a look at German colonies. For this Vol. 3A, our review included German East Africa, with approximately 125 value changes; German New Guinea, with around 77; and German South West Africa, with close to 145. A mix of increases and decreases was noted.

Iran was also examined, and approximately 250 changes were made for this year.

Copies of the 2022 Scott Catalogue Volume 3 (Countries G-I) are available AmosAdvantage.com in both print and digital formats.