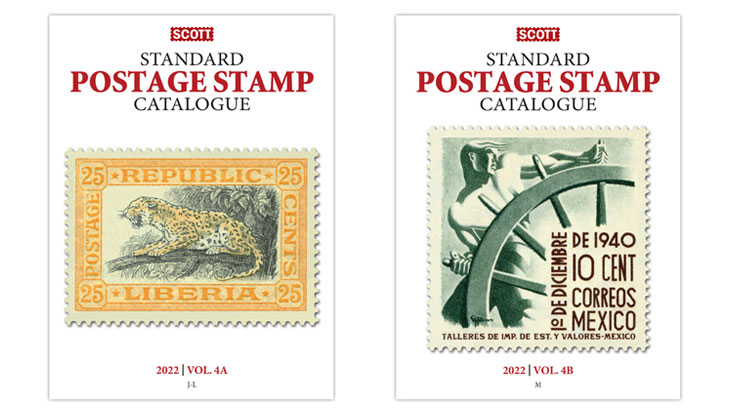 Vol. 4A (countries of the world Jamaica through Luxembourg) and Vol. 4B (Macao through Mozambique) of the 2022 Scott Standard Postage Stamp Catalogue are now available for purchase.

Another catalog season is upon us as we continue the journey of the 153-year history of the Scott catalogs.

The 2022 volumes are the 178th edition of the Scott Standard Postage Stamp Catalogue.

Volume 4A includes listings for the countries of the world Jamaica through Luxembourg.

Listings for Macao through Mozambique countries of the world can be found in Vol. 4B.

This year’s covers feature the Liberia 1921 25¢ Leopard stamp (Scott 188, from an issue of 12 that shows scenes, animals and people) on the Vol. 4A catalog and the Mexico 1940 10-centavo Man at Helm stamp (766, from a set of stamps marking the inauguration of President Manuel Avila Camacho) on Vol. 4B.

Because Vol. 4B is a continuation of the first part of the Vol. 4 catalog, the introduction pages are not repeated in each volume this year.

Much of the review for this year’s catalog took place throughout 2020 and into 2021. The world was interrupted by the COVID-19 pandemic, and the effects of that hit the stamp world in multiple ways.

For the countries included in the Vol. 4 catalogs, we took a more conservative approach to the number of value changes, even though a significant amount of time was put into reviewing countries.

A number of editorial footnotes were added to mark the existence of imperforate examples; values were also included when the editors had sufficient market data.

One example was Liberia’s 2005 Rotary International Centennial set of four stamps (Scott 2371-2374) that exists imperforate and has a value of $20. That same set with normal perforations moved from a catalog value of $5 to $6 unused and used.

The handful of value changes for Macedonia were a combination of increases and decreases.

A database error in the 2021 edition placed all the values for Macedonia Scott 1-126 in italics. The mistake was corrected for this edition.

Almost 200 value changes were made for Mexico.

Never-hinged values were added for the first time to stamps issued from 1941 through 1944.

A number of minor listings for Mexico were also added for stamps that exist as pairs or multiples with a label where previously only a pair or pair plus label was listed.

The difference in value between a pair and a pair with label is fairly substantial for many of these updated listings.

See the Number Additions, Deletions and Changes list for the affected listings.

Several minor-number listings were added to Macao for stamps with different perforation gauge measurements. These listings first appeared in the 2021 Scott Classic Specialized Catalogue of Stamps and Covers 1840-1940.

For the 2022 Scott catalogs, the Scott editors paid close attention to German colonies.

For this volume, Kiauchau, Mariana Islands and the Marshall Islands were reviewed, with approximately 100 value changes made for each.

The value changes reflected a mix of increases and decreases.

One of the increases for the Marshall Islands was the 5-mark Kaiser’s Yacht “Hohenzollern” stamp (Scott 25), which rose from $140 in unused condition to $150. The used value, which is in italics because of limited market data, decreased slightly from $500 to $450.

We also suggest reading the catalog introduction in Vol. 4A, which includes an abundance of useful information.

Copies of the 2022 Scott Catalogue Volume 4 (Countries J-M) are available AmosAdvantage.com in both print and digital formats.