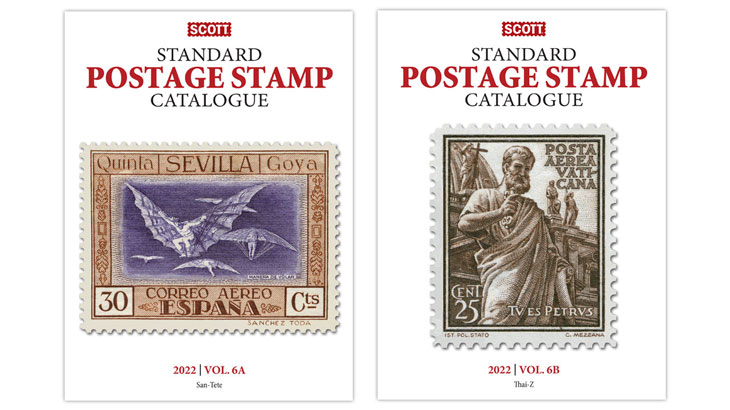 Vol. 6A (countries of the world San Marino through Tete) and Vol. 6B (Thailand through Z) of the 2022 Scott Standard Postage Stamp Catalogue are now available for purchase.

Another catalog season is upon us as we continue the journey of the 153-year history of the Scott catalogs. The 2022 volumes are the 178th edition of the Scott Standard Postage Stamp Catalogue. Volume 6A includes listings for the countries of the world San (San Marino) through Tete. Listings for Thai (Thailand) through Z countries of the world can be found in Volume 6B.

This year’s covers feature Spain’s 1930 Fantasy of Flight airmail stamp (Scott C25) from the 14-stamp Goya issue on the Vol. 6A catalog and Vatican City’s 1938 25-centesimo Statue of St. Peter stamp (C1) from an eight-stamp set on Vol. 6B.

Because Vol. 6B is a continuation of the first part of the Vol. 6 catalog, the introduction pages are not repeated in each volume this year.

In Vol. 6, significant additions were made to the listings of stamps of Sharjah. Also, the stamps of South Kasai and Viet Cong are listed for the first time.

For the Trucial State of Sharjah, new images and listings were added for hundreds of stamps. The new numbers span Scott 97-434 in the regular postage section, C34-C108 for airmail stamps and J1-J4 for postage due stamps. This continues a large multi-year project to add stamps and values for these areas.

The Kasai region seceded from the Republic of Congo on Aug. 9, 1960, but established nations did not recognize it as an independent state. South Kasai returned to the Republic of Congo in October 1962. During the secession, South Kasai stamps were tolerated in the international mails, but the government authorizing them was not given diplomatic recognition. There are 29 new major listings now provided for the stamps of South Kasai.

Viet Cong stamp issues of the National Front for the Liberation of South Vietnam (NLF) and Provisional Revolutionary Government (PRG) are also being listed for the first time. A total of 70 major Scott catalog numbers were assigned to those stamp issues.

The stamps of North Vietnam and the Democratic Republic of Vietnam were reviewed closely for this catalog, and almost 1,000 value changes were made. Many of the changes were slight increases, but some items decreased. One standout item was a 1989 80-dong Turtles souvenir sheet (Scott 1971) that increased in value from $6 to $15 in unused condition. The same souvenir sheet, but imperforate, moved from $17 to $25 unused. Many new listings of imperforate items were added to Vietnam.

Nearly 500 value changes were made for the stamps of Turks and Caicos after a line-by-line review. A mix of increases and decreases was noted. Some of the increases made are a reflection of the current strength of the British pound.

Vanuatu stamps were reviewed with approximately 400 value changes made. A number of the early stamp issues decreased slightly, while a few modern items saw an increase. The 2006 Worldwide Fund for Nature (WWF) souvenir sheet of eight with four designs (Scott 908) went from $13.50 in unused and used condition to $15 both ways.

The stamps of Uganda were reviewed with slightly more than 400 value changes made. The colorful Uganda 1962 Independent State set of 12 stamps (Scott 83-94) increased in value from $18.55 to $20 in unused condition. A used set is valued at $27.

Extensive reviews were provided for two South American countries: Uruguay with nearly 3,000 value changes and Venezuela with approximately 2,700 changes. For both countries, modern issues saw a number of value increases. The block of four Uruguay 2004 Lighthouses stamps (Scott 2061) increased to $6.50 from $5.50 in unused condition. Venezuela’s sheet of 10 2001 Christmas stamps (1625) increased to $32.50 from $24 in unused condition.

Almost 700 value changes were made for the stamps of Vatican City, which received a complete review. Editorial notes were updated where appropriate with additional notes added if needed.

Many other countries received reviews that are not noted in this letter.

We encourage you to pay special attention to the Number Additions, Deletions and Changes listing in this volume. We also suggest reading the catalog introduction in Vol. 6A, which includes an abundance of useful information.

Copies of the 2022 Scott Catalogue Volume 6 are available AmosAdvantage.com in both print and digital formats.