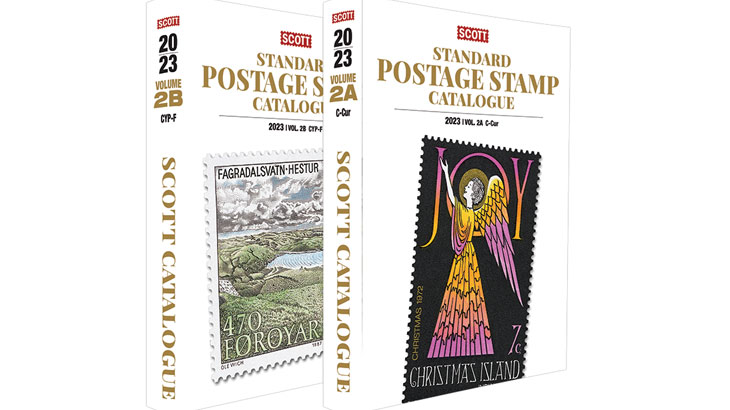 Volumes 2A (countries of the world Cambodia through Curacao) and 2B (Cyprus through F countries) of the 2023 Scott Standard Postage Stamp Catalogue are now available for purchase from Amos Media.

Another catalog season is upon us as we continue the journey of the 154-year history of the Scott catalogs. The 2022 volumes are the 179th edition of the Scott Standard Postage Stamp Catalogue. Volume 2A includes listings for countries of the world Cambodia through Curacao. Listings for Cyprus through F countries of the world can be found in Vol. 2B. Because Vol. 2B is a continuation of the first part of the Vol. 2 catalog, the introduction pages are not repeated in each volume this year.

Among the anchors for the Vol. 2 catalogs are Canada and Canadian provinces, which were extensively reviewed. Most of the value changes were increases because of strong auction realizations for items in the classic period.

The stamps of China were reviewed, and a handful of changes were made. The stamps of Taiwan were reviewed, too, with approximately 300 changes made. Our line-by-line analysis showed that through the year 2000 values were relatively stable with somewhat more increases than decreases.

Approximately 400 value changes were made for the stamps of the People’s Republic of China. For stamp issues up to 1995, many increases were noted. One has to consider the nearly constant political and outside forces that influence this market. As it has been in the recent past, it is a very volatile market subject to value changes at a much more rapid rate than that of any other country.

Finland and Aland received an extensive line-by-line review through the year 2015, which yielded approximately 3,000 value changes. For Finland prior to the 1950s, values tended to trend downward. But for post-1950s issues (post-1984 for Aland), value changes reflected a mix of increases and decreases. For example, the Finland 2014 Castles booklet pane of six (Scott 1454) increased from $16.50 to $18 in unused condition.

Copies of the 2023 Scott Catalogue Volume 2 are available on AmosAdvantage.com in both print and digital formats.