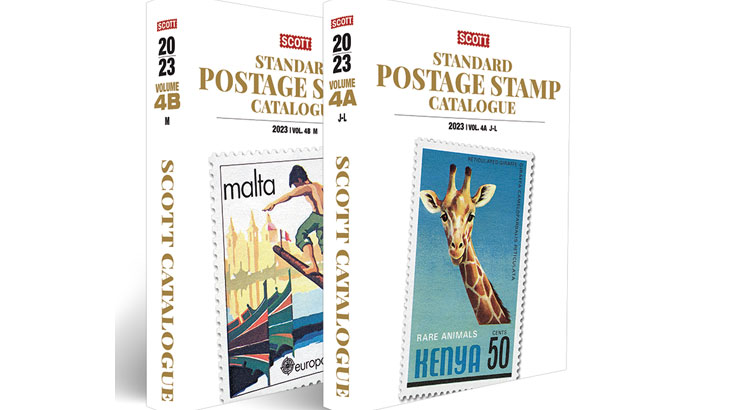 Vol. 4A (countries of the world Jamaica through Luxembourg) and Vol. 4B (Macao through Mozambique) of the 2023 Scott Standard Postage Stamp Catalogue are now available for purchase.

Another catalog season is upon us as we continue the journey of the 154-year history of the Scott catalogs. The 2022 volumes are the 179th edition of the Scott Standard Postage Stamp Catalogue. Volume 4A includes listings for countries of the world Jamaica through Luxembourg. Listings for countries of the world Macao through Mozambique can be found in Vol. 4B.

Because Vol. 4B is a continuation of the first part of the Vol. 4 catalog, the introduction pages are not repeated in each volume.

The stamps of Macao were extensively reviewed with approximately 150 values changes made, most of which were increases. Some modern items showed some stronger changes, including the 2003 Year of the Ram souvenir sheet that moved from $3.75 in unused and used condition to $6.

A line by line review was conducted for Kiribati with numerous changes totaling almost 500. There was a mix of slight increases and decreases, but the decreases seemed to be more prevalent.

Kenya was looked at for this catalog season with approximately 500 value changes made. A large number of the changes were slight decreases in the 10 to 20 percent range.

For Jamaica, the stamps of the classic period were reviewed with nearly 200 value changes made. The changes were a mix of slight increases and decreases. One increase was for the 1872 ½-penny claret Queen Victoria stamp (Scott 13), which moved in unused condition from $22 to $24.50.

Other countries reviewed for this volume include Japan, Jordan, Katanga, Kazakhstan, Kuwait, Laos, Libya, Malta and others.

Copies of the 2023 Scott Catalogue Volume 4 are available on AmosAdvantage.com in both print and digital formats.