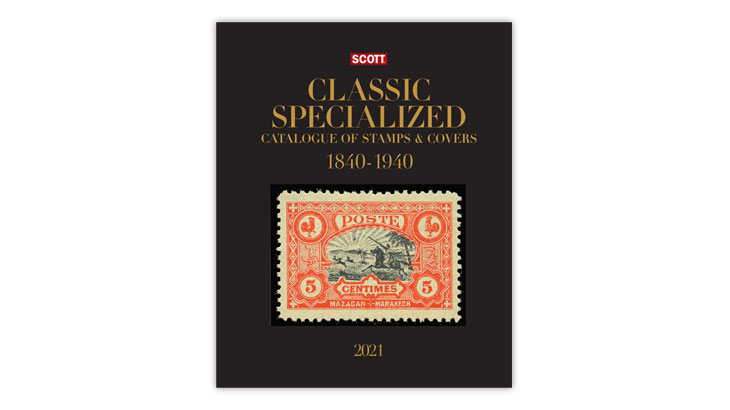 The 2021 Scott Classic Specialized Catalogue of Stamps and Covers 1840-1940 includes many editorial enhancements and value changes. Local stamps of French Morocco are listed for the first time, and the cover of the catalog features the French Morocco 1899

The 2021 Scott Classic Specialized Catalogue of Stamps and Covers 1840-1940, widely recognized as the best single-volume catalog for classic-era stamps of the world, celebrates its 27th edition this year.

We recognize the tireless efforts of Scott editor-at-large Donna Houseman, who serves as the lead editor of the Scott Classic Specialized catalog. Houseman was assisted by Bill Jones, a former Scott associate editor. Together, they provided numerous updated values and significant editorial enhancements throughout the 2021 Scott Classic Specialized catalog.

What sets the Scott Classic Specialized catalog apart from the six volumes of the Scott Standard Postage Stamp Catalogue are the thousands of never-hinged listings, on-cover listings, varieties, pre-stamp postal markings and forerunner listings, among other features.

New on-cover listings were added to listings for Alexandretta, Bahrain and Lebanon.

Forerunners of French Andorra and Spanish Andorra appear for the first time.

A Special Feature article by Sismondo takes an in-depth look at the first six stamp issues of India (Scott 1-6). The first general issue, which features a portrait of Queen Victoria, has been completely reworked in this edition of the catalog to include eight new major numbers and 10 minor numbers reflecting the die types and head types. New enlarged images help the collector identify the die types and head types.

Local stamps of French Morocco are listed for the first time in the 2021 Scott Classic Specialized catalog, and the cover of the catalog features the French Morocco 1899 5-centime Mazagan to Marrakech Hunting Gazelle local stamp (Scott 4L10).

Guatemala Official stamps with perforated initials were added this year. By a 1912 decree, all external mail sent from government offices in the capital was to be franked with regular stamps perforated “OFICIAL.” These new listings are Scott O6-O67. The previous Nos. O6-O12 have been renumbered as O68-O74.

Approximately 150 value changes were noted for Aden, which includes India stamps used in Aden. The stamps are now identified by the previously mentioned die types of India’s first issue. Values for Ceylon stamps used in Aden also have been updated.

Central Albania stamps are listed for the first time (Scott 1-23, J1-J5). The listings can be found at the end of the Albania listings. Following the departure of Prince Wilhelm of Wied on Oct. 2, 1914, Essad Pasha established a regime in Durres, which, with Serbian support, soon included much of central Albania.

The regime issued stamps with overprints on previously issued Albanian regular postage, postage due and revenue stamps, and on unissued stamps commissioned in 1913 by an earlier government, which were in use during 1915 and 1916. Essad’s Central Albania collapsed with the Austro-Hungarian invasion of the area in the spring of 1916.

Collectors of Portuguese colonies should take note of the thousands of value changes made throughout the catalog for different stamp-issuing entities. For example, almost 450 value changes are noted for the Azores, more than 75 for Cape Verde, more than 175 for Inhambane, and more than 200 for Macau. Portuguese Guinea, Portuguese India, and St. Thomas and Prince Islands received thorough reviews with more than 700, 1,000 and 850 value changes, respectively.

More than 250 minor listings were added for Portuguese India. See the number additions list in the catalog for specific details.

For Romania, new listings for postal tax stamps were added as Scott RA19A-RA21A.

The stamps of Turkey in Asia were reviewed and netted more than 170 value changes.

Both Turks Islands and Turks and Caicos Islands were closely examined, resulting in more than 130 value changes combined. Most of these changes were increases. New minor listings were also added.