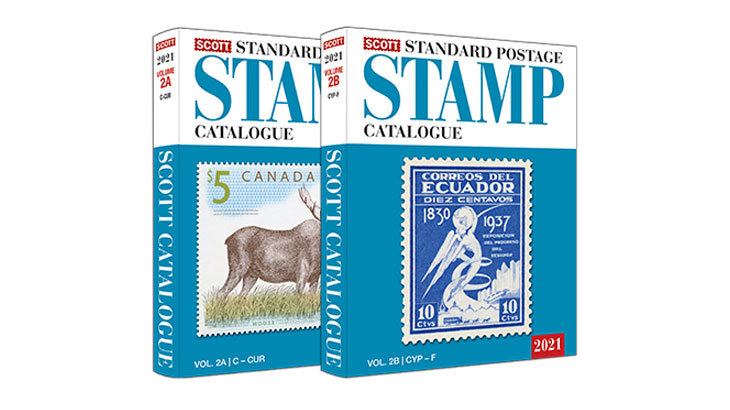 Vol. 2A (countries of the world Cambodia through Curacao and Vol. 2B (Cyprus through F countries) of the 2021 Scott Standard Postage Stamp Catalogue are now available for purchase from Amos Media. 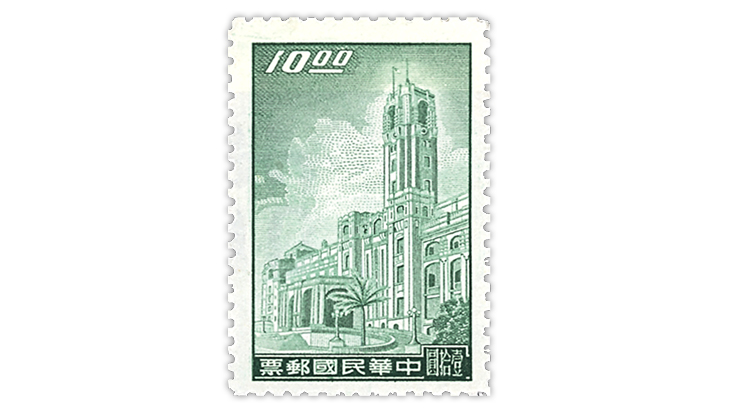 Another catalog season is upon us as we continue the journey of the 152-year history of the Scott catalogs. The 2021 volumes are the 177th edition of the Scott Standard Postage Stamp Catalogue. Vol. 2A includes listings for countries of the world Cambodia through Curacao. Listings for Cyprus through F countries of the world can be found in Vol. 2B.

Approximately 200 value changes were made in the listings for Canada. With the Canadian dollar remaining stable during the past year and the cost of a Canadian permanent stamp increasing only slightly, values for many of the modern stamp issues remained unchanged for the 2021 catalogs.

There was a mix of increases and decreases for earlier stamps of Canada. One notable increase was for the watermarked 1868 ½¢ Queen Victoria stamp (Scott 21b), which increased to $25,000 from $22,500 in unused condition.

The market for modern Canadian stamp errors appears to be softening, and a number of values were adjusted accordingly.

Interest in the stamps of specific Canadian provinces remains strong, and few value changes were made. When compared to the major listing of a stamp, it appears varieties of the listing seem to be performing slightly better.

The stamps of Cape Juby were reviewed, with approximately 100 value changes noted. Most of these changes were slight decreases.

Interest in Cape Verde is strong, and there were a number of increases and some decreases throughout the listings. The most significant increase was for the 40-reis Crown of Portugal stamp (Scott 5), which went from $85 unused and $50 used to $105 and $55, respectively.

Approximately 400 value changes were made for Chad, most of which were slight decreases.

The stamps of China were reviewed, with approximately 400 values changed. Values appear to be softening, but one exception was the 1897 set of three surcharges (Scott 25-27) that jumped from $472.50 unused to $740 unused.

Almost 4,000 value changes were made for the stamps of the Republic of China (Taiwan). Stamps from 1950 to 1970 are doing very well. There were numerous value increases, some of them fairly large. A mix of increases and decreases were noted for stamps issued after 1970.

A line-by-line review of post-1971 Comoro Islands stamps took place. Approximately 175 value changes — a mix of increases and slight decreases — were recorded. A number of souvenir sheets were noted and valued for the first time in footnotes.

The stamps of the People’s Republic of Congo were reviewed, with more than 100 value changes made. Most of these changes were decreases.

The stamps of Djibouti received a line-by-line review, with more than 130 value changes made. A significant number of footnotes with descriptions and values for souvenir sheets not previously noted were added.

For the Dominican Republic, an editorial note was added about the speculative Universal Postal Union surcharges of 1891. The note includes this explanation:

“Although this issue was authorized by the President the entire supply was given to a single speculative French dealer. A few covers exist most addressed to his wife in New York.”

The note also mentions that numerous forgeries of the surcharged UPU set exist.

A complete review of Ethiopia yielded almost 2,000 value changes. Although decreases predominated, earlier issues fared better. The 1903 set of seven overprints (Scott 22-28) increased from $176 in both used and unused conditions to $234 both ways in the 2021 catalog.

Three new minors were added to the listings of the surcharged Bird stamps of Fiji.

Lastly, the stamps of Funchal received a full review, with many slight increases noted for almost all of its stamps.