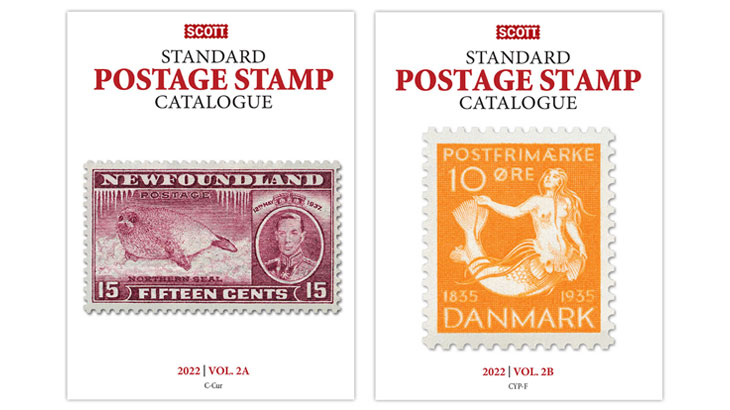 Volumes 2A (countries of the world Cambodia through Curacao and 2B (Cyprus through F countries) of the 2022 Scott Standard Postage Stamp Catalogue are now available for purchase from Amos Media.

Another catalog season is upon us as we continue the journey of the 153-year history of the Scott catalogs. The 2022 volumes are the 178th edition of the Scott Standard Postage Stamp Catalogue. Volume 2A includes listings for countries of the world Cambodia through Curacao. Listings for Cyprus through F countries of the world can be found in Vol. 2B.

Because Vol. 2B is a continuation of the first part of the Vol. 2 catalog, the introduction pages are not repeated in each volume this year.

For the Carpatho-Ukraine section, we would like to acknowledge the contributions of Jay T. Carrigan (1939-2015) and thank Ingert Kuzych and Mark Stelmacovich for their research and assistance with this section that was years in the making.

Canada and provinces were reviewed closely, and approximately 100 changes were made. Because of the pandemic, fewer auctions of Canadian material took place compared to previous years. For Newfoundland, two new listings (Scott 26a and 48c) were added for cover values where the major-number stamp was used as a half (bisect) on cover.

Chile received a review, and approximately 300 value changes, largely increases, were made. One of the increases was for the Flora and Fauna issue of February 1985. This block of 12 10-peso stamps (Scott 686) increased in used condition from $12.50 to $20. Values for similar stamps issued in later years also increased slightly.

There were 75 value changes for the stamps of Colombia, many of which were increases. Some more modern material is proving difficult to find as collectors work to complete collections.

For Denmark, approximately 75 value changes were made. One of the important updates to this country was the addition of phosphor tagging varieties as minor listings. Around 60 new minor-letter listings were added for stamps that were issued with and without tagging. Some values were also changed to reflect the distinction between ordinary and fluorescent papers. A complete listing of the numbers added is found on the Number Additions, Deletions and Changes page in this volume.

A thorough review of Ecuador resulted in more than 1,500 value changes, with a mix of decreases and increases throughout. New overprint varieties were added for an Official and two postal tax issues: Scott O137a, RA1a and RA31b. Additionally, values were added for the Coat of Arms overprints (Scott 113 and 114). These two stamps are each valued at $100 in used condition, and Scott 113 is valued at $100 in mint condition. A dash remains for the mint value of Scott 114. These new values are in italics to indicate that the stamps trade infrequently.

Copies of the 2022 Scott Catalogue Volume 2 (Countries C-F) are available AmosAdvantage.com in both print and digital formats.