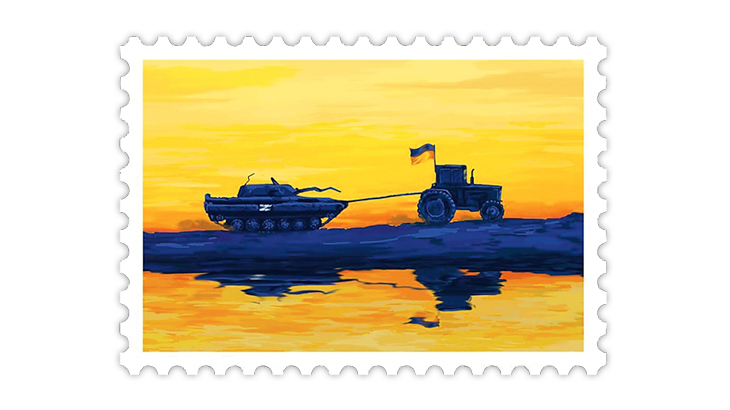 Another iconic image of Ukraine’s resistance to the Russian invasion will appear on Ukrainian stamps to be issued in July, according to Ukraine’s national postal operator, Ukrposhta.

The new stamps will show a tractor pulling a disabled Russian tank. And like the two stamps issued April 12 illustrating the defiant response of the Ukrainian defenders of Snake Island, the new design is the result of a contest conducted by Ukrposhta.

Anastasia Bondarets won this second stamp-design contest. Her entry was among the more than 1,500 received in the contest that Ukrposhta called “Good evening, we are from Ukraine.”

Ukrposhta narrowed the entries down to five and displayed them on its Facebook and Instagram pages on June 9, opening the contest for public voting at the same time.

Ukrposhta reported June 15 that almost 834,000 Ukrainians voted in the contest, with the winning design receiving 340,000 votes. A press release on June 18 revealed Bondarets as the artist.

Bondarets said that in creating her design she was inspired by Ukrainian farmers who were helping the military. She said that “this tractor, which is carrying broken enemy equipment to be repaired and put into service by our military, is an allegory of how every Ukrainian does everything in his power, to the best of his ability, to bring our victory closer.”

Tractors became a symbol of Ukrainian resistance after videos and cartoons showing them hauling Russian equipment were shared online. Photos also were shown online, but according to some fact-checkers, some of these had been altered. The fact-checking website Snopes said March 16 that while many of the images were genuine, others had been “incorrectly captioned.”

In Bondarets’ illustration, the tractor is flying a Ukrainian flag. Also, the artwork mirrors Ukraine’s national colors, showing the scene of the tractor and tank in blue, surrounded by yellow.

Ukrposhta has reported that it will issue two stamps featuring this illustration in July: 3 million for domestic mail and 2 million for international mail.