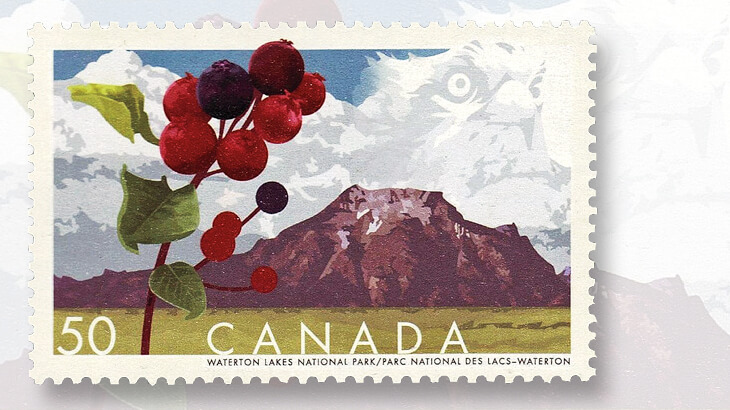 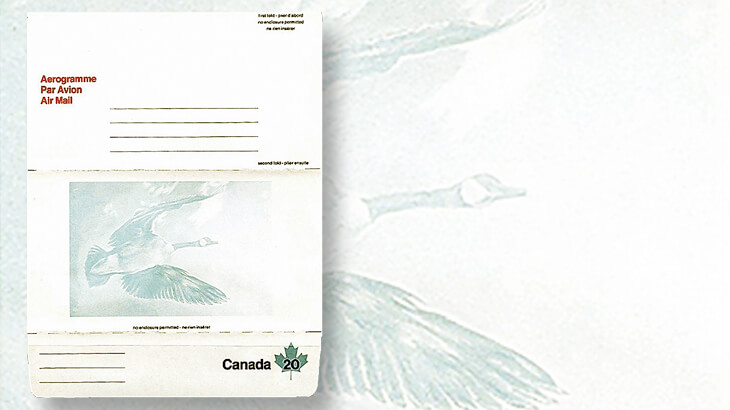 Is the Canada goose that is printed on this unfolded 1975 20¢ aerogram any less worthy of inclusion in a Canadian topical bird collection than a stamp? 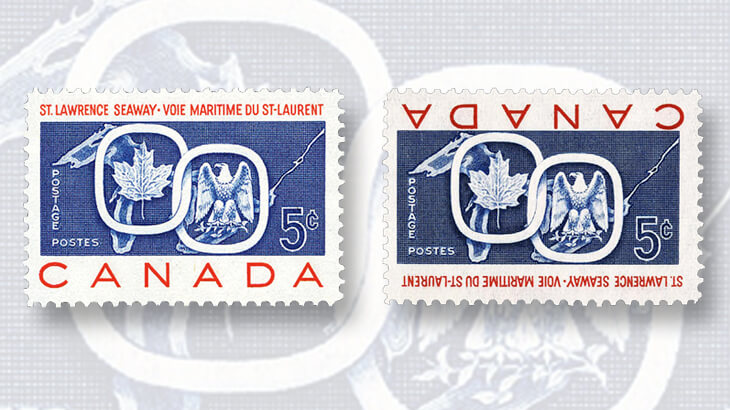 Does a stamp picturing a bird belong in a collection of birds on Canada’s stamps when the bird symbolizes a foreign country, as the bald eagle does on this 1957 5¢ St. Lawrence Seaway stamp (Scott 387)? Do you need its rare error variety for your collecti 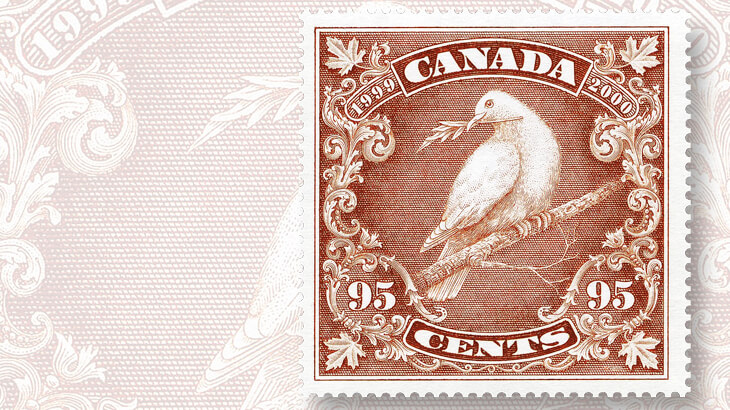 Engraved by the Canadian Bank Note Co., this 1999 95¢ Millennium Dove (Scott 1814) was issued both as the stamp shown and in a one-stamp souvenir sheet. Which would you prefer in a Canadian birds collection, or would you rather collect both? 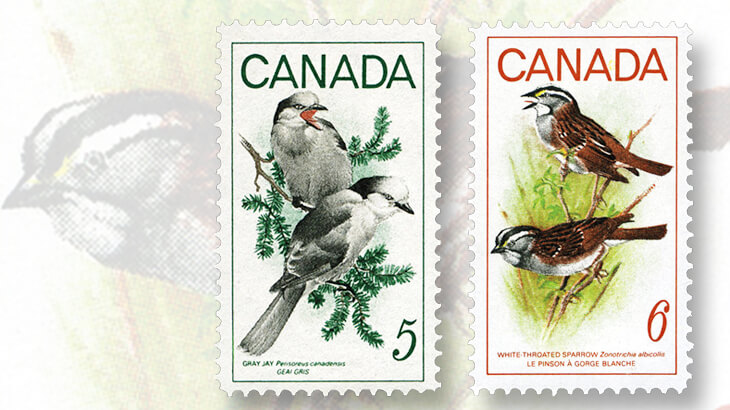 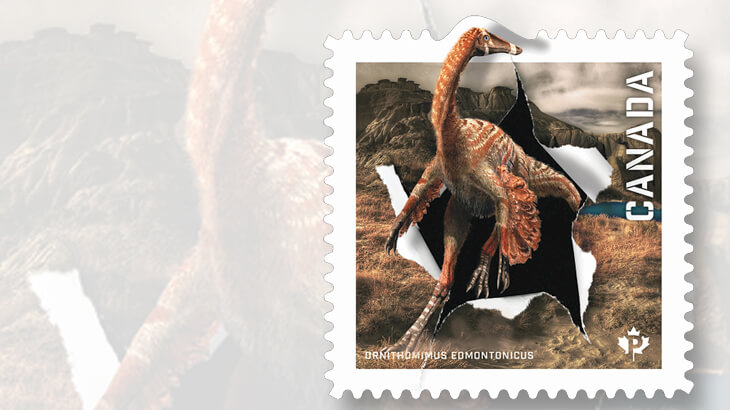 Ornithomimus edmontonicus, who last lived 66 million years ago, returned on this 2015 permanent-rate Dinos of Canada stamp of 2015. It had long feathers, as shown, and may have lived much like an ostrich. Does it belong in a bird collection? 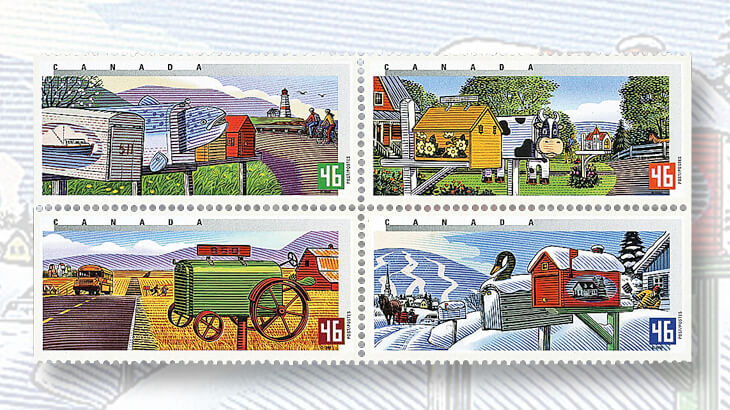 The stamp in the upper left shows two lines symbolizing birds. Would you include this stamp in a collection of birds on Canada’s stamps? Is there another stamp in this Decorated Rural Mailboxes block of four (Scott 1849-1852) that would be a better choice 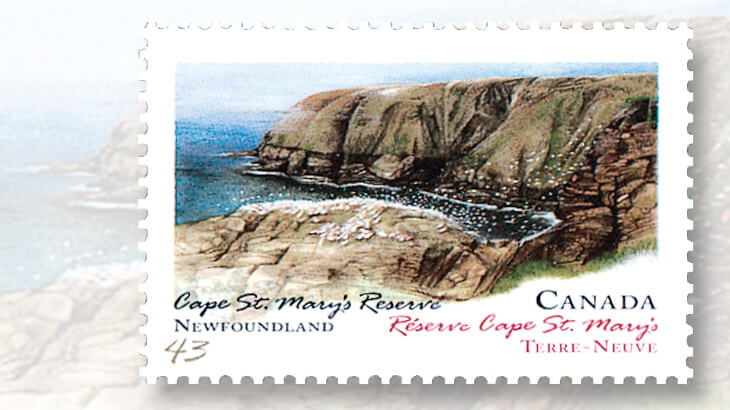 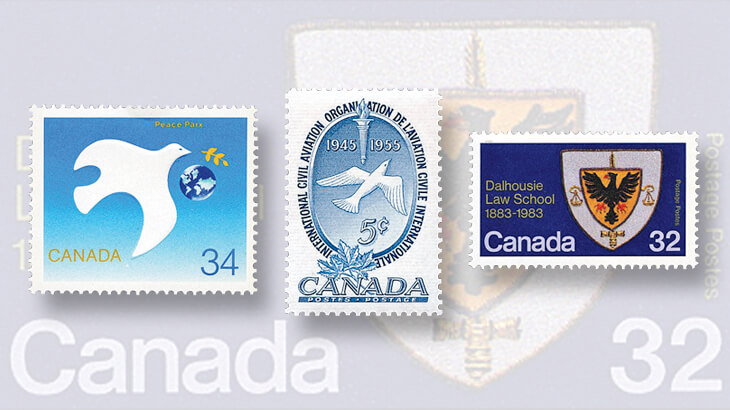 These birds don’t fly for the author of this column: a white blob on the 1986 34¢ International Peace Year stamp (Scott 1110); the strange-looking creature on a 1955 5¢ commemorative for the International Civil Aviation Organization (354); and the black e 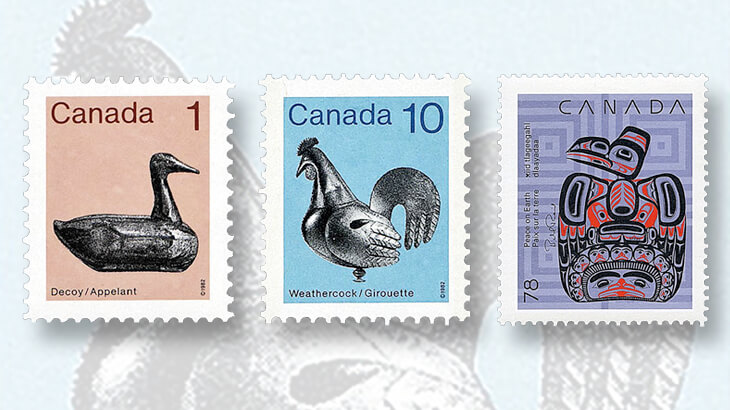 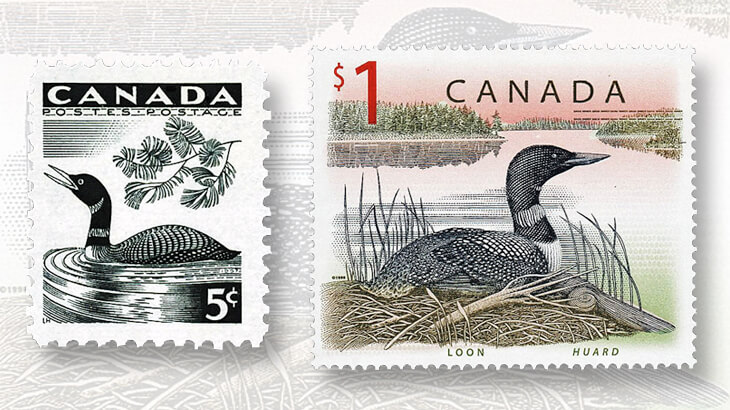 Two stamps depicting loons, a 5¢ in black from 1957 for National Wildlife Week (Scott 369) and an engraved, multicolored, microprinted $1 Loon from 40 years later (1691), demonstrate that bird stamps come in all degrees of sophistication. 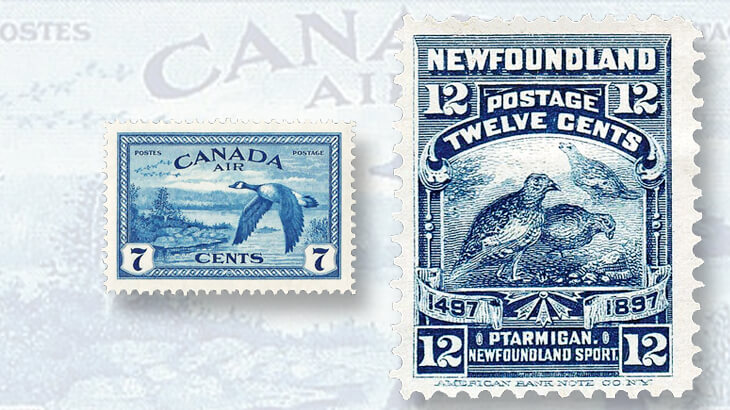 Which is the earliest bird stamp of Canada: the 7¢ Canada Geese Near Sudbury airmail stamp of 1946 (Scott C9) or the 12¢ Willow Ptarmigan stamp (Newfoundland 69) issued 52 years before Newfoundland joined Canada? 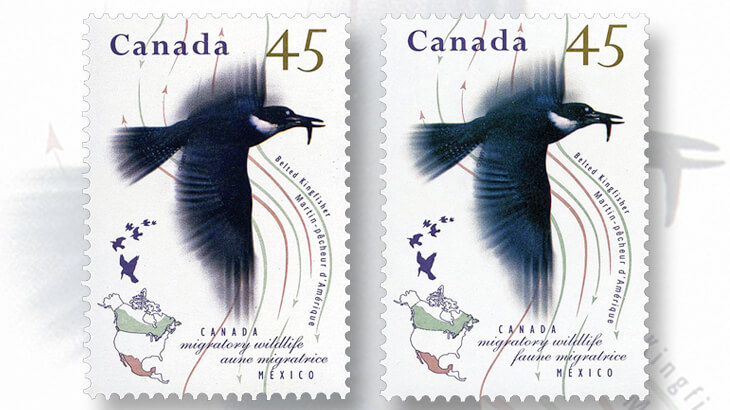 A much more affordable error is this 45¢ Belted Kingfisher stamp from a 1995 Migratory Wildlife issue. After it was issued on Aug. 15, collectors noted the error in the French text on the stamp (Scott 1564), “aune migratrice.” Six weeks later the error wa
Previous
Next

Ever since I was a kid, I have loved the stamp hobby and wild birds. I learned bird-watching along the Humber River not far from where I grew up in the west end of Toronto. That explains my fascination with birds on Canada’s stamps, including the new Official Birds of Canada to be issued July 12.

Now if you’re just here to find a nice web page with some Canadian bird stamps on it, this will do nicely.

And if you’re looking for a really substantial treatment, there are the 126 varieties and formats listed and illustrated on the Canada page of an immense, up-to-date worldwide bird stamp website. Click on the small images and they enlarge automatically so you can really appreciate the stamp designs.

Both of these sites feature bird stamps worth seeing.

In collecting birds and other topics on stamps, a good checklist, like the many compiled and made available by the American Topical Association, is indeed a very valuable tool.

However, if you want to make a bird stamp collection distinctly yours, even for a single country such as Canada, there is a good deal more involved. You need to ask yourself questions, and to develop judgment. And you’ll find you need to make more calls on your own than you may have imagined.

How fundamental are these questions? Well, here are three: What is Canada? What are stamps? What are birds?

“What is Canada?” is a question you’ll encounter with the first stamp you choose to put in your collection, which probably will be one of the two shown nearby.

The 7¢ airmail stamp is the first issued by Canada to depict a bird. Issued in 1946, it shows Canada geese near the northern Ontario nickel-mining center of Sudbury  (Scott C9).

It is not, however, the first stamp depicting birds to have been issued in what is now Canada, an honor that goes to the stamp shown with it, issued almost 50 years earlier. It is a 12¢ dark blue stamp from Newfoundland picturing the willow ptarmigan (Scott 69), issued in 1897 as part of a 14-stamp set commemorating the 400th anniversary of John Cabot’s arrival there in 1497.

Fifty-two years after this stamp was issued, Newfoundland became part of Canada, the 10th and final province.

So, which of these two stamp do you choose as the earliest to start your collection? There is no right answer. There is only the answer that you choose.

Now, what if the bird is on a stamp issued by Canada, but was deliberately selected as the symbol of another nation? Does that belong in a topical collection of birds on Canada’s stamps? If that sounds far-fetched and hypothetical, look at the second pair of stamps.

Completed in 1959, the Canadian-American St. Lawrence Seaway is a ribbon of riches from Duluth, Minn., and Thunder Bay, Ont., to the Atlantic Ocean.

Creating a stamp to cover the vast scale of the project and salute the two nations that partnered in completing it was no small accomplishment. The joint issue released in 1959 (Canada Scott 387 and United States Scott 1131) did a fine job on both counts.

The bird on the stamp is not your average avian, but the unambiguous national symbol of the United States — the bald eagle, and a rather cross-looking one at that, at least on the 5¢ stamp of Canada.

However, bald eagles are found throughout Canada south of the tree line, so they have an ecologically legitimate place on one of its stamp. (Also, if you don’t include it, you’ll be missing a bird, because no other stamp of Canada depicts a bald eagle.)

But then there’s the Seaway invert error, Canada’s closest counterpart to the fabled U.S. 24¢ Jenny invert, right down to the type and colors of error. Juxtaposed with a normal stamp valued at 35¢ mint is the error, which Scott currently values at $10,000. (Many who exhibit side-step this problem by titling their submission “Regular Issues of Canada Depicting Birds,” but judges definitely know when you do or don’t have an invert.)

When the stamp on the left (Scott 1564) was issued Aug. 15, 1995, sharp-eyed scholars saw that the French text near the bottom of the stamp, “aune migratrice,” was missing an “f.” Shown next to it is the corrected replacement stamp reading “faune migratrice” (Scott 1567), issued six weeks later. Today, these two stamps together catalog under $1.75.

You would think “What are stamps?” would be a much more straightforward question. But what about the 20¢ aerogram that was printed for and issued by Canada Post in 1975 that features a large Canada goose in flight on the reverse? Does this not belong in a topical bird collection, too?

What about a booklet cover, such as the one for the Audubon booklet for panes of six 65¢ Gyrfalcon stamps issued in 2003 (Scott 1983a)? And what of one of my favorite Canadian bird stamps, the striking engraved 1999 95¢ Millennium Dove (Scott 1814), hoping to usher in a century of peace with an olive branch? This one was photographically cropped from the much larger “souvenir sheet … with decorative border” that Scott mentions (but does not list), because I prefer the stamp shorn of all that distracting and unnecessary froufrou.

Do you agree? Would you prefer it, or perhaps include both, in your topical collection?

Would you treat all souvenir sheets the same? I would not.

Five penguins of two species, none of them on a stamp, stare at the 54¢ Arctic tern on Canada’s 2009 Preservation of Polar Regions and Glaciers souvenir sheet (Scott 2327b). I’d want them in my collection.

Canada has many excellent bird stamps, including what appear to be bickering pairs of gray jays and white-throated sparrows on 1968-69 stamps (Scott 478, 496).

Bird stamps needn’t be of great value, or technically elaborate either, to enhance a fine collection.

But it turns out that “What are birds?” may be the trickiest problem of all.

Consider the block of four 46¢ Decorated Rural Mailboxes stamps (Scott 1849-1852). The top-left stamp includes the graphic shorthand for birds we learned in elementary school, essentially a pair of brackets or commas that meet at their ends. I doubt anyone would look at this stamp and say “I’ve got to have it for my bird collection.” The bird doesn’t have a shape, form, name or even a color; it’s just two lines used to fill an empty space. How many hundreds of other stamps are there like it?

On the other hand, in the same block of stamps there is another stamp that I would like for my bird collection. You may or may not agree. (I’ve put it at the end of the column. No peeking!)

Nearby, I’ve gathered three Canadian stamps that I feel are symbols rather than actual birds. I wouldn’t put them in my collection. (You could include them in your collection, of course, perhaps by adding that birds have long been used as symbols of human hope, aspiration and authority.)

The weirdly stylized creature pictured on the 5¢ stamp for the 10th anniversary of the International Civil Aviation Organization in 1955 (Scott 354) looks like a banana covered with aluminum siding.

And the black eagle seal pictured on the 1983 32¢ stamp for the centennial of Halifax’s Dalhousie Law School (Scott 1003) is an adaptation of a Scottish coat of arms picturing a bird that lives exclusively in Asia.

On the other hand, nearby are three stamps that don’t show birds at all that I want in my collection. Two are 1982 1¢ and 10¢ Early Canadian Artifact definitives picturing a hand-carved wooden duck decoy (Scott 917) and a metal weathercock (Scott 921), and the other is an unusual 1990 78¢ international-rate Christmas stamp reproducing Children of the Raven by highly regarded graphic artist Bill Reid, whose mother was Haida.

These stamps show how the bird has been integrated into both the indigenous and immigrant folk art of Canada.

There is no bird you can see in the next stamp here, but it’s one I wouldn’t be without. The 43¢ stamp (Scott 1475), from a Canada Day 1993 sheet of 12 honoring Canadian parks, depicts Cape St. Mary’s Seabird Ecological Reserve at the southwesternmost point on Newfoundland’s Avalon Peninsula, and appears to have a thin covering of snow. It’s not snow, but seabirds — 66,000 of which, from six different species, breed each year in this remote enclave.

I enlarged the design and, before my eyes failed me, counted more than 330 discrete white dots in the foreground. That’s a lot of birds for any one stamp.

What would you do with the nearby 50¢ Waterton Lakes stamp of 2005 (Scott 2105), which appears to have no bird on the stamp? Now look above the mountain, and into the eye of a gigantic Western osprey concealed in the clouds.

What would you do with the die-cut 46¢ commemorative issued in 2001 to celebrate the 25th anniversary of the Toronto Blue Jays baseball team (Scott 1901)?

Finally, whatever do we do with Ornithomimus edmontonicus, who last lived 66 million years ago, portrayed on one of the die-cut permanent-rate Dinos of Canada stamps of 2015?

The generic name means “bird mimic,” and while the colors of the plumage are strictly from the artist’s creative mind, the feathers themselves are not.

As Canada Post wrote, “It used its speed to outrun predators and to hunt for prey, which included small lizards and mammals.“ It may be easier to catch them, too, if you can glide. Or it may have lived and dined like the modern creature it most seems to resemble, the ostrich.

Making choices can be tough. The payoff, however, is that when you complete your collection, it will be distinctively your own, with the decisions you’ve made proudly showcased on its pages. It is, quite literally, all up to you, and that’s what makes topical collecting great.

The stamp I’d keep from the Decorated Rural Mailboxes block of four is the one at bottom right (Scott 1852), which uses the stylized head and neck of a Canada goose to decorate the box top.