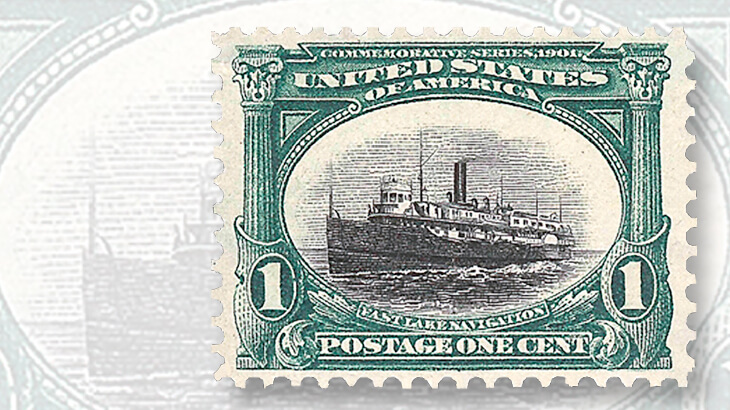 The green and black stamp (Scott 294) from the 1901 Pan-American Exposition issue is one of the United States stamps included in Linn’s U.S. Graded Stamp Report.

Each year, Scott new-issues editor Marty Frankevicz reviews, country by country, the basic costs of obtaining the new stamps that are issued every year. Throughout the year, he tracks the Scott major varieties, face values and catalog values at the time each stamp is assigned a Scott number and listed in catalog. The charts can be found here.

Readers can find the results of Frankevicz’s compilations for the year 2015 in his latest Linns.com article. Frankevicz has had the opportunity to look at hundreds of thousands of new stamps that have crossed his desk since he assumed the position of Scott new-issues editor in 1999.

This annual cost analysis offers insights into how currency fluctuations affect our beloved hobby. For example, in 2011 Frankevicz noted: “In 2010, the United States dollar took a nosedive in value in comparison to a number of currencies, most notably the Swiss franc, Australian dollar, Canadian dollar and Japanese yen. The strength of these three currencies against the greenback became even sharper in early 2011. With the weaker U.S. dollar, values of new issues for these countries increased, reflecting the higher prices collectors had to pay to obtain the many issues that sprang forth from these countries.”

How times have changed and currency values have flipped. In his 2017 report on the 2015 costs of new issues, Frankevicz reports that at the start of 2017, 1 euro was valued at about $1.04, and at $1.23 the British pound was the “lowest it has been since the 1980s.” Frankevicz also is quick to point out that inflation also plays a role in the cost of new issues.

On page 16 of the Linn’s February monthly magazine, which you can get with a digital edition subscription, is the quarterly Linn’s U.S. Graded Stamp Report, a review of how the philatelic marketplace has affected a group of United States postage stamps and back-of-the-book stamps. The report, by Scott editor emeritus Jim Kloetzel, provides “updated and expanded retail values for selected United States stamps.” The values are provided for the stamps in eight grades.

It is tempting to dive right into the charts to see what values have increased or decreased since the previous report, but read the introduction to the report carefully before you explore the lists of values. In his introduction, Kloetzel provides critical information regarding grades, emphasizing that each stamp fits within a grade range, not a single grading point. A stamp can be closer to the lower range or higher range of a specific grade. This is valuable information for collectors and dealers alike.