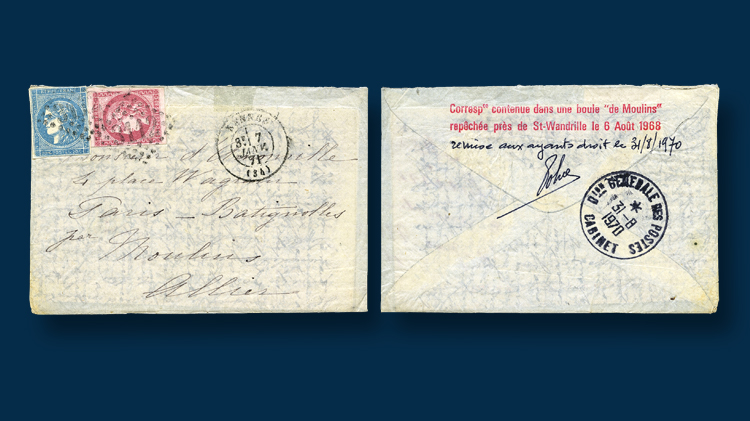 Delivered after 99 years, this “boule de Moulins” cover from the 1871 Siege of Paris was sold through the Swiss auction firm David Feldman.

The March 22 Switzerland Specialized auction by David Feldman offered a cover that sold for the equivalent of $40,462, including a 20 percent buyer’s premium.

Feldman’s Specialized France sale on March 21 featured an item with one of the longest delivery times in history.

Paris was besieged by the Germans during the Franco-Prussian War in 1870-71. Several methods of getting mail in and out of the besieged city were attempted, including floating mail in zinc balls down the Seine River into Paris.

However, the first ball arrived in Paris just after the siege ended. The most recent recovery was in 1982.

One bag of mail lost in the Seine was recovered far north of Paris in Normandy in 1968. The letters were reposted, marked “Corresp contenue dans une boule de Moulins repechee pres de St-Wandrille le 6 Aout 1968,” which translates to “Correspondence contained in a ball from Moulins, retrieved near St. Wandrille, Aug. 6, 1968” and delivered to the next of kin.