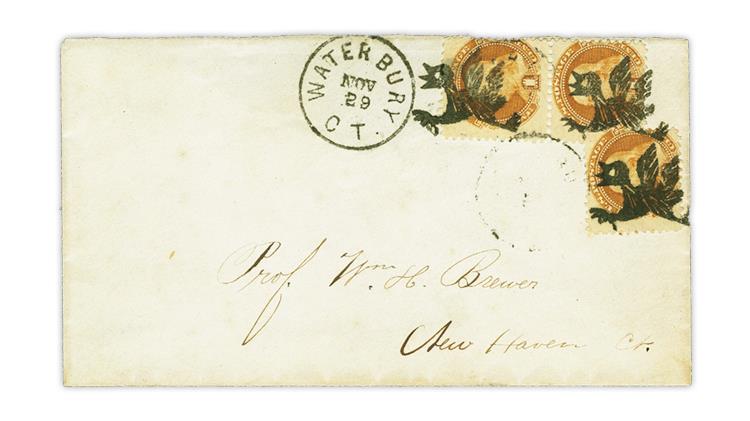 Of all the fancy cancels created by Waterbury, Conn., postmaster John W. Hill, the Running Chicken is the most famous. The storied cover bearing three perfect strikes of this iconic marking will cross the auction block during the June 24 H.R. Harmer aucti 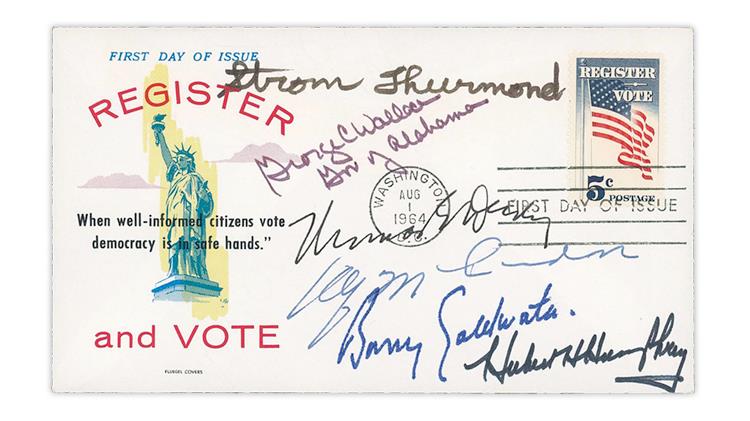 This United States 1964 5¢ Register and Vote first-day cover autographed by six presidential candidates is among the vast array of stamps, postal history, ephemera and other philatelic material up for bids in the June 22-24 H.R. Harmer auction series in N 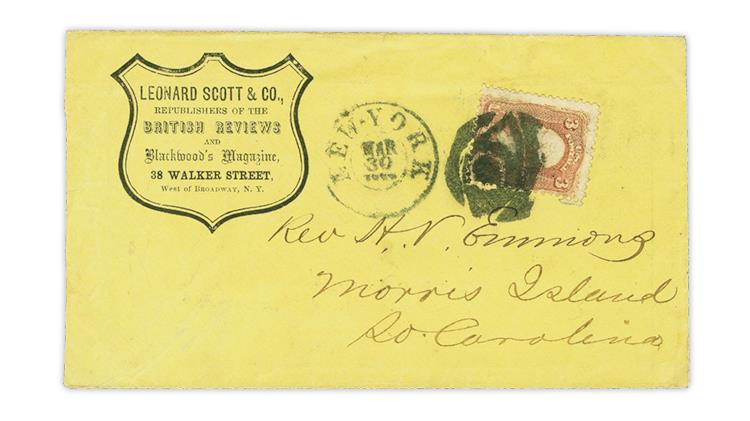 H.R. Harmer’s June 24 sale of the Erivan collection of 1862-70 New York City fancy cancellations includes this March 30, 1866, cover bearing a crisp strike of an alert Seeing Eye. As a bonus, the yellow envelope features the ornate corner card of Leonard
Previous
Next

The cover bearing three bold strikes of the legendary Running Chicken of Waterbury, Conn., arguably the most famous and sought-after piece of United States fancy cancel postal history, will be among a cache of philatelic jewels to be sold during H.R. Harmer’s June 22-24 auction series at its gallery in Rockefeller Center in New York City.

Leading off the three-day sale on June 22 is part 3 of the expansive collection of worldwide postal history formed by Larry C. Parks. This part of the collection focuses on Asia, Europe and Latin America (no British colonies), according to H.R. Harmer.

Dozens of countries are represented among the many stamped envelopes and postal cards offered as single lots. Also up for bids are a number of smaller, country-specific collections.

A grouping of postal stationery from Argentina consists of more than 1,000 items “in five binders including postal cards, envelopes, wrappers, letter cards, letter sheets, pneumatic post, parcel post, and more,” according to the lot description in the catalog for the Parks collection.

H.R. Harmer is offering this Argentina postal stationery collection with a starting bid of $1,000.

Slightly more than 2,500 lots will be available to collectors during the June 22-23 general sale of U.S., British Commonwealth and worldwide stamps, covers and collections. Specialized offerings include the Abraham Wagner collection of U.S. vending- and affixing-machine perforations, the Donald Beuthel collection of Colorado manuscript postmarks, and the Charles J. DiComo collection of wafer seals on U.S. folded letters and covers.

Further offerings from the Parks postal history collection, with emphasis on machine cancels, India and philatelic literature, are included in the two-day general sale, H.R. Harmer president Charles Epting said in the introduction to the catalog for the sale.

Epting also draws attention to the significant number of lots listed with “offer” instead of a starting bid.

For “offer” lots, “there is no firm start price, no reserve, and they will sell for one increment over the second highest bid regardless of what that may be,” Epting said.

At left is a cachet (decorative design) featuring the Statue of Liberty and a quote that reads, “When well-informed citizens vote democracy is in safe hands.”

H.R. lists this eye-catching autographed FDC with a starting bid of $150.

In the second auction, which will start at 4 p.m., H.R. Harmer will offer part 7 of the Erivan collection of U.S. and Confederate States postal history. Among the 14 lots featuring Waterbury fancy cancels is the iconic Running Chicken cover.

The Erivan collection of New York fancy cancels features covers to suit a broad range of budgets because the notable and nondescript are offered side by side.

“Union soldiers and waving American flags are sandwiched between nondescript wedges and circles,” Epting said. “Prices may vary exponentially from one lot to the next.”

Haub’s penchant for quality cancellations regardless of price is seen throughout because almost all of the covers bear bold, clear strikes.

A representative example is a March 30, 1866, cover franked with an 1861 3¢ rose Washington (Scott 65) tied by a wide-open Seeing Eye fancy cancel. The cover was mailed to Morris Island, S.C., and bears the corner card (return address) of “Leonard Scott & Co., Republishers of the British Reviews and Blackwood’s Magazine” within a double outline shield.

This attractive Seeing Eye fancy cancel cover is listed by H.R. Harmer with a starting bid of $250.

The Running Chicken and numerous other well-known cancels were the creation of Waterbury postmaster John W. Hill. Covers bearing Waterbury fancy cancels routinely attract great interest when they come up for sale. The bible of these cancels is Paul C. Rohloff’s The Waterbury Cancellations 1865-1890, published in 1979 by the Collectors Club of Chicago.

A clear Nov. 29 (1869) Waterbury circular datestamp is immediately to the left of the pair of 1¢ Franklin stamps at the top of the cover. Two indistinct strikes of the Waterbury datestamp are also visible. One notable defect is not visible from the front, namely the envelope is missing most of its backflap.

The crisp, complete strikes of the Running Chicken reveal the intricacy of Hill’s handiwork, which clearly shows the fine details of the bird’s feathers. This suggests that the cancel was used not long after Hill carved it.

Debate continues regarding what medium Hill used to produce the Running Chicken cancel. However, the intricate features of other fancy cancels produced by Hill suggest that he used boxwood. On the other hand, an argument can be made that Hill used cork because the cancels exhibit signs of rapid deterioration despite being used for brief periods.

“Originally inspired by an advertising cornercard, [the Running Chicken] design has captured the imagination of generations of collectors,” H.R. Harmer said in its detailed lot description for the Running Chicken cover.

“Since its appearance on the market in the early 20th Century, this particular cover … has come to be regarded as one of the greatest gems of American philately — the perfect intersection of American history and aesthetic appeal.”

Given the Nov. 29 postmark date, which is close to Thanksgiving, some philatelic specialists have speculated that the bird is a turkey, not a chicken.

“In 1869, President Ulysses S. Grant moved Thanksgiving from the first Thursday in November to the third (November 18). Therefore, given its proximity to the holiday many scholars have postulated that the Running Chicken could be a Thanksgiving turkey trying to escape a butcher,” H.R. Harmer said.

A detailed account of the cover’s exceptional provenance is given in Linn’s Philatelic Gems by Donna O’Keefe, published in 1984.

New York City stamp dealer J. Murray Bartels purchased the Running Chicken cover in 1916 for the modest sum of $1, or roughly $26.50 today when adjusted for inflation.

The cover, which Bartels had priced at $10, then languished under the glass of his stamp counter for several years before Sen. Ernest R. Ackerman bought it for the asking price.

The cover passed from Ackerman to Edward S. Knapp via dealer Elliot Perry, who sold Ackerman’s collection. Following Knapp’s death in 1940, the cover was sold in 1941 to Glenn Jackson for $1,400.

In 1970, Katharine Matthies acquired the cover for $6,750 during Robert A. Siegel Auction Galleries’ sale of the Jackson Waterbury collection.

Louis Grunin became the next owner when he paid $45,000 at the 1977 Siegel sale of the Matthies collection. The then-record price took a number of philatelists by surprise.

“But surprise turned to astonishment at the Sotheby Parke Bernet auction in 1979, when William Crowe, acting on behalf of [Ryohei] Ishikawa, purchased this rarity for $240,000,” O’Keefe wrote. With the 10 percent buyer’s premium, Ishikawa paid a total of $264,000.

“That more than a quarter of a million dollars had been paid for three common stamps on a defective domestic cover whose sole distinction is several strikes of a privately prepared killer marking, made the transaction noteworthy in the extreme,” Michael Laurence wrote in a review of the Sotheby Park Bernet sale in the February 1980 issue of the 1869 Times, the official journal of the U.S. 1869 Pictorial Research Associates.

Laurence wryly observed that from a return-on-investment perspective it would have been more beneficial to invest the $264,000 in 30-year U.S. Treasury bonds, which at the time of the 1979 sale were yielding interest of 10½ percent.

When Christie’s sold Ishikawa’s collection of U.S. 1847-69 stamps and covers in 1993, the Running Chicken cover sold for $255,500 (inclusive of the buyer’s premium), a modest loss of roughly 3 percent from what Ishikawa paid 14 years earlier.

The successful buyer at the Ishikawa sale was John Robertson, who subsequently sold his stellar collection of fancy cancellations, which included the Running Chicken cover, to John R. Boker Jr. in a private transaction for an undisclosed sum. Dealer Andrew Levitt brokered the sale between Robertson and Boker.

Haub acquired the cover from Boker in a private sale, the details of which have not been publicly revealed.

A Philatelic Foundation certificate dated March 28, 2022, and issued to H.R. Harmer states that the cover is “a genuine usage with backflap missing.”

Separate catalogs for each of the four auctions are posted on Issuu, an online publishing platform. Each catalog is downloadable. Online bidding options are available through Stamp Auction Network.