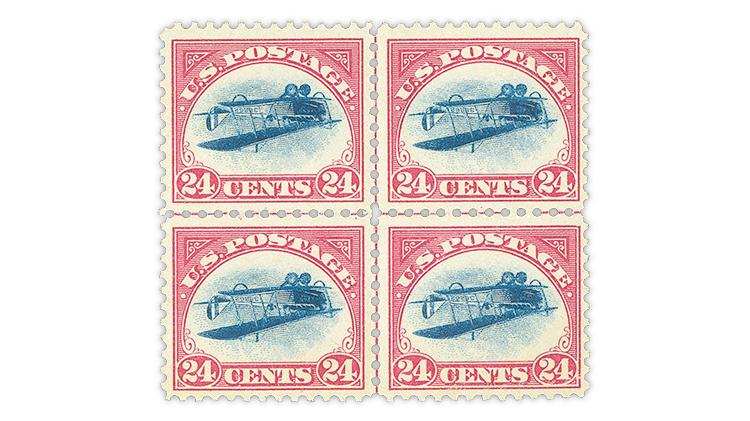 The centerline block of the Jenny Invert error stamps, scheduled for auction Sept. 27, is at the center of a dispute between Bill Gross and his son Nick, according to a news report in The New York Post.

Stamp collecting recently made headlines in The New York Post, but the story is not a happy one.

In a page 3 article in the Sept. 23 edition of the newspaper, reporter Kevin Dugan wrote about a rift between billionaire collector Bill Gross and his youngest son, musician Nick Gross, that involves an offering of Jenny Invert stamps at a New York City auction.

According to the Post story, “California financier Bill Gross is scrambling to thwart youngest child Nick’s auction” of five Jenny Invert error stamps: the centerline block of four and a single stamp from position 39 on the original discovery pane.

The stamps are headlining the Sept. 27 auction by the New York office of the British-based firm Spink. Linn’s Stamp News reported on the pending sale on page 1 of the Sept. 23 issue.

The 1918 24¢ stamp erroneously showing a blue “Jenny” biplane printed upside down within a carmine rose frame (Scott C3a) is one of America’s most famous stamps. One pane of 100 stamps was found a century ago, and Bill Gross has bought and owned quite a few of the legendary errors.

The Post quotes an unnamed source that says Gross claims he gave Jenny Invert stamps to each of his three adult children “to be kept as an inheritance for his grandchildren.”

Nick Gross told the Post in a statement that “There was never an agreement that the stamps would not be sold.”

Bill and his wife Sue divorced in 2017 after 32 years of marriage, and Nick Gross has been estranged from his father since divorce papers were filed, the Post notes.

In recent years, Gross has sold several of his stamp collections through Robert A. Siegel Auction Galleries in association with Charles F. Shreve and Tracey L. Carey, donating all of the proceeds to charity.

Siegel reported in 2018 that those auctions “generated more than $26 million, all of which has been generously donated to worthy charitable organizations.”

A day after the Post story broke online, the Jenny Invert stamps at the center of it all remained listed on the Spink auction website.

According to the Post report, Nick Gross suggested that if his father would like to have the stamps back, “he is welcome to buy them at auction.”