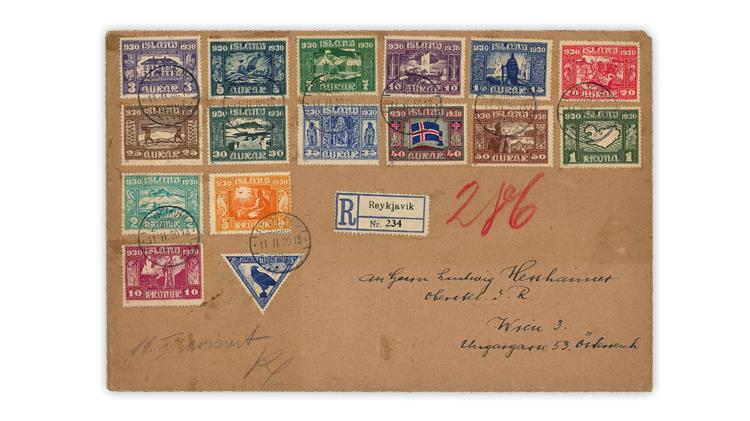 This 1930 registered cover franked with a complete set of Iceland’s Parliament Millennium stamps and a 10-eyrir Gyrfalcon airmail stamp will cross the auction block during Schuyler Rumsey Philatelic Auctions’ Dec. 8-9 sale of United States and worldwide stamps and covers. Ludwig Hesshaimer, the designer of the stamps, addressed the cover to himself. 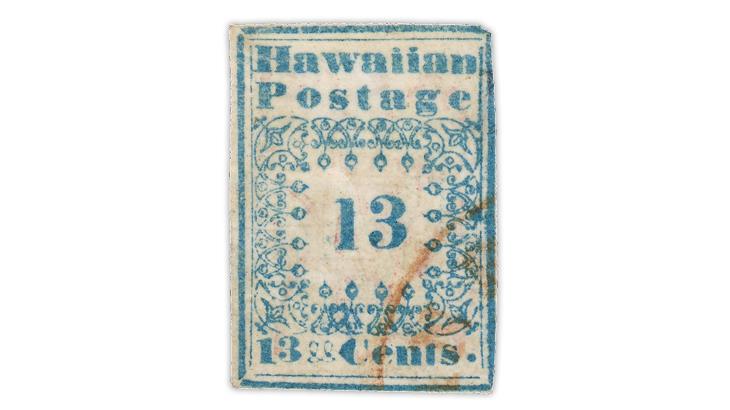 Rumsey will offer part 1 of the Gary Munson collection of Hawaii during its Dec. 8-9 auction. One of the three 1851-52 Missionary stamps up for bids is this used 13¢ blue type II. 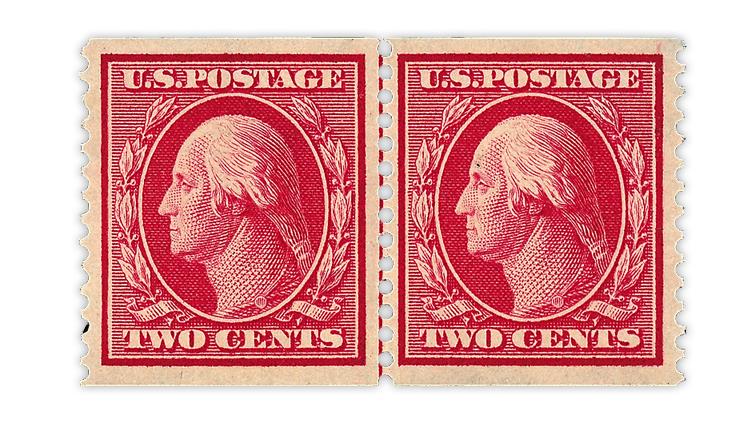 One of the highlights of the general foreign offerings is an oversized registered cover franked with a complete set of Iceland’s Parliament Millennium stamps (Scott 152-166) and a 10-eyrir Gyrfalcon airmail (C3) that was sent Feb. 11, 1930, from Reykjavik, Iceland, to Vienna, Austria. Eight strikes of a Reykjavik circular datestamp tie all 16 stamps to the cover.

Ludwig Hesshaimer, who designed the Parliament Millennium and Gyrfalcon stamps, addressed the cover to himself in his own hand, according to Rumsey.

Rumsey notes that a couple of the stamps show a “minor trace of gum staining.”

Rumsey estimates this multicolored 1930 registered cover from Iceland to Austria at $400 to $600 and lists it with an opening bid of $190.

The Scott Classic Specialized Catalogue of Stamps and Covers 1840-1940 values a used Parliament Millennium set at $964 and a used 10a Gyrfalcon airmail at $75. These values are italicized to indicate that these stamps can be difficult to value accurately because of limited market data.

Among the numerous attractive 19th-century U.S. issues up for bids is a mint, never-hinged 1898 5¢ dull blue Trans-Mississippi stamp (Scott 288).

The stamp boasts wide, even margins and uniform perforations all around, along with a crisp impression and excellent color.

According to Rumsey, the stamp is accompanied by a 2001 Philatelic Foundation certificate and a 2019 graded very fine extra fine-85 certificate from Professional Stamp Experts.

A 5¢ Trans-Mississippi in mint condition and very fine-80 grade is valued at $300 in the Scott Specialized Catalogue of United States Stamps and Covers. The Scott Stamp Values U.S. Specialized by Grade values a mint example in the grade of very fine extra fine-85 at $500.

Rumsey is offering this handsome mint 5¢ Trans-Mississippi stamp with an opening bid of $110.

Rumsey states that a magenta pen cancel has been removed from the stamp, and a tear at right has been sealed. Faults such as these are commonly seen on Hawaii Missionary stamps, and the Scott U.S. Specialized catalog states that values for Hawaii Scott 1-4 are for stamps “with minor damage that has been skillfully repaired.”

Rumsey said that this is one of the more desirable examples of this stamp because it “does not have margins or any portions of the design added as so many of the Hawaiian Missionaries do.”

“The San Francisco orange-red [circular datestamp] was struck across the lower right corner probably as the post office processed prepaid mail for the next trip via Panama. The magenta manuscript cancel visible on this stamp in the Admiral Harris sale was removed before its next appearance at auction, [and] indicates a very early use of the stamp,” Rumsey said.

Against a Scott U.S. Specialized catalog value of $32,500, Rumsey is offering this Hawaii 13¢ type II Missionary stamp with an opening bid of $7,250.

One of the more desirable items from the popular Washington-Franklin series of definitive stamps is an unused guideline pair of the 1910 2¢ carmine George Washington horizontal coil with the single-line “USPS” watermark (Scott 388). The watermark is an abbreviation for United States Postage Stamp.

As can be seen in the illustration, the guideline falls just to the left of the center of the perforations between the two stamps.

The Scott U.S. Specialized catalog includes a helpful cautionary footnote with its listing for Scott 388: “Stamps offered as No. 388 frequently are privately perforated examples of No. 384, or examples of No. 375 with top and/or bottom perfs trimmed.”

The two auction catalogs prepared for the December and gems of philately sales can be viewed on the Rumsey website or downloaded from the same site as PDF files. Online bidding is available through Stamp Auction Network.