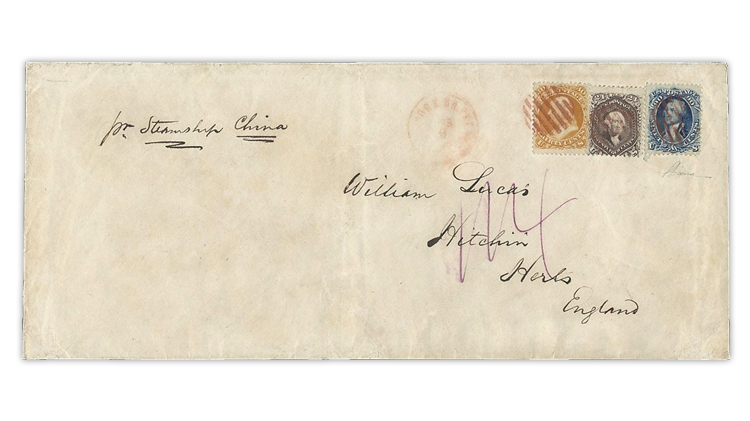 The Nov. 29-30 sale from Auction Galleries Hamburg provides an extensive selection of worldwide material. This cover mailed in 1862 from the United States to England is franked with three different stamps of the 1861-66 issue.

The German firm Auction Galleries Hamburg has prepared a two-day auction of worldwide stamps, covers and collections. The sale will take place Nov. 29-30 at the firm’s Reichenhof address in Hamburg.

While offering a broad selection of Germany and associated regions, the auction also includes many singles and large lots from countries around the world.

Among the few individual lots for the United States (listed under “Vereinigte Staaten von Amerika,” the German translation) is a handsome trans-Atlantic cover with a three-color franking of the 1861-66 issue: specifically, the 90¢ blue Washington (Scott 72), the 30¢ orange Ben Franklin (71) and the 24¢ red lilac Washington (70).

The large cover from 1862 is addressed to Hertfordshire, England, with the $1.44 in postage paying six times the 24¢ rate. A handwritten endorsement at upper left reads “pr Steamship China.”

The 90¢ blue stamp is valued at $25,000 on cover in the 2020 Scott Specialized Catalogue of United States Stamps and Covers, with that figure in italics to denote an item that can be difficult to value accurately. The cover is listed by Auction Galleries Hamburg with a starting bid of €4,500 (approximately $5,010 in early November).

The auction also offers a 1915 cover franked with overprint varieties from New Britain: a rare pair of the 1-penny-on-2d-on-20-pfennig overprint on the ultramarine Marshall Islands stamp, along with a single of the 1d-on-2d-on-20pf overprint on the ultramarine German New Guinea stamp. With expertization that includes a 1970 British Philatelic Association certificate, the cover is offered with a starting bid of €35,000 ($39,000).

The auction lots for this sale can be viewed on the Auction Galleries Hamburg website, and online bidding is also available through Stamp Auction Network.