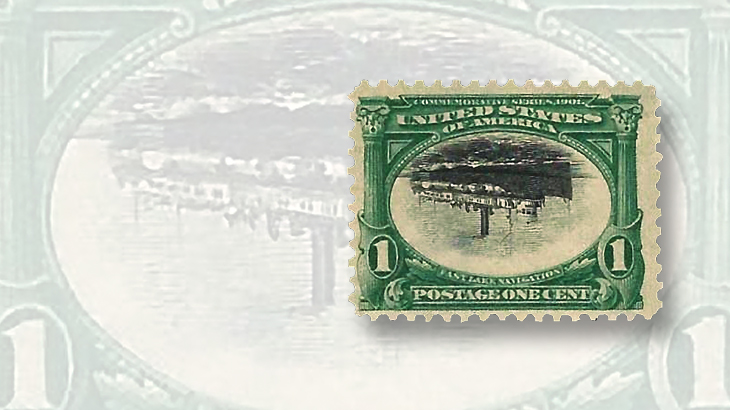 An unused 1901 1¢ Pan-American Exposition stamp with center inverted is among the classic stamps offered in the March 18-19 public auction by Dutch Country Auctions of Delaware. 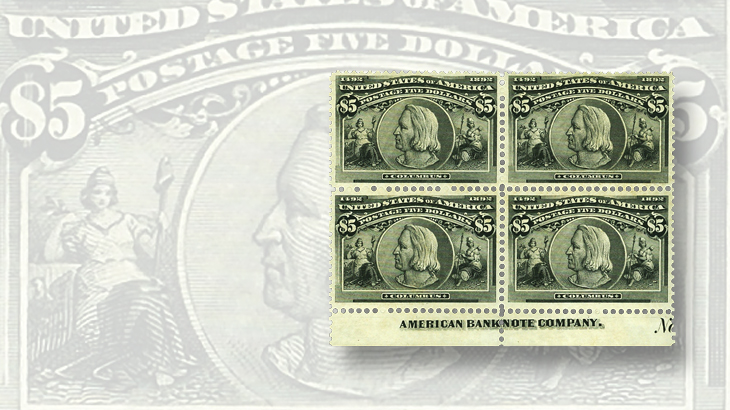 Described as never hinged with possible previous hinging at top, this bottom margin imprint block of four of the 1893 $5 Columbian stamp is another United States classic offered in the Dutch Country sale.
Previous
Next

Linn, the printer and philatelic researcher who would begin publishing Linn’s Weekly Stamp News in 1928, applied a printed message to the lower left corner of these black-bordered covers, making them the first modern cacheted covers for a postage stamp issue.

The covers are postmarked on the Sept. 1 issue date in Marion, Ohio, where the stamp was officially issued. Harding had made his home there as the owner of the Marion Star newspaper.

Both covers are addressed to Linn in Columbus, Ohio. The first of the two covers also includes the signed name of the Marion postmaster as “French Crow, Postmaster” in a different hand at upper left, and is described as “border cover open at top.” It is listed with a value of $800, opening at $150.

The second cover is not signed at upper left, and is listed with a value of $600, opening at $80.

The classic U.S. listings in the Dutch Country auction include an example of the 1¢ green and black Fast Lake Navigation stamp with inverted center from the 1901 Pan-American Exposition issue (Scott 294a).

The unused hinged stamp is described as having deep rich color with a couple of trivial specks and a tiny inclusion. It is accompanied by a 1970 certificate from the Philatelic Foundation, and listed with a value of $10,500, opening at $2,500.

An earlier U.S. commemorative set, the 1893 Columbian Exposition issue, is represented in the upcoming auction with several mint and unused single stamps, including two hinged examples of the $5 Columbus stamp (Scott 245).

Also on offer is a block of four of the $5 stamp with bottom margin imprint. The block is described as never hinged, “possible previous hinging at top, bottom pair NH.” The auction catalog description notes slight gum toning and minor gum marks, a few tiny or trivial specks, with perfs at bottom in selvage reattached.

Also noted are the “outstanding well balanced margins” on this block.

Dutch Country Auctions calculates an approximate catalog value of $121,000 for what it calls “a truly magnificent showpiece,” and offers the block with an opening of $10,000.

A nice unused set of Taiwan’s four 1951 surcharged second Flying Geese stamps in green is among the hundreds of worldwide stamp issues offered. The stamps (Scott 1042-1045) range from the $5 to $50 denominations, with no gum (as issued).

Lots for the March 18-19 Dutch Country auction can be viewed and bids can be placed online at Stamp Auction Network.