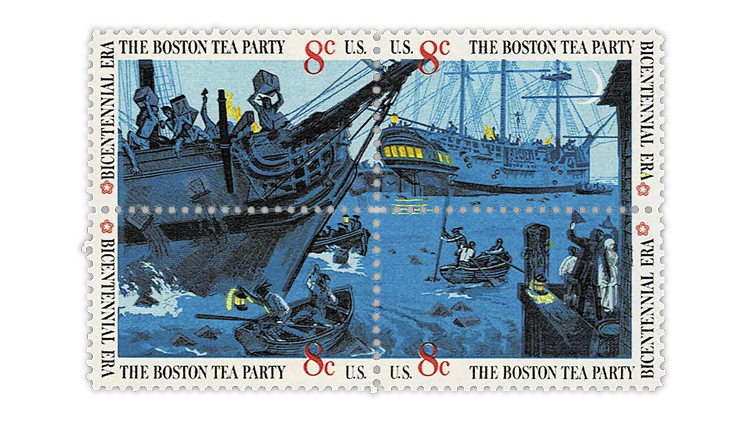 Figure 1. The 1973 8¢ Boston Tea Party block of four can be an expertizer’s nightmare. A normal block is shown. 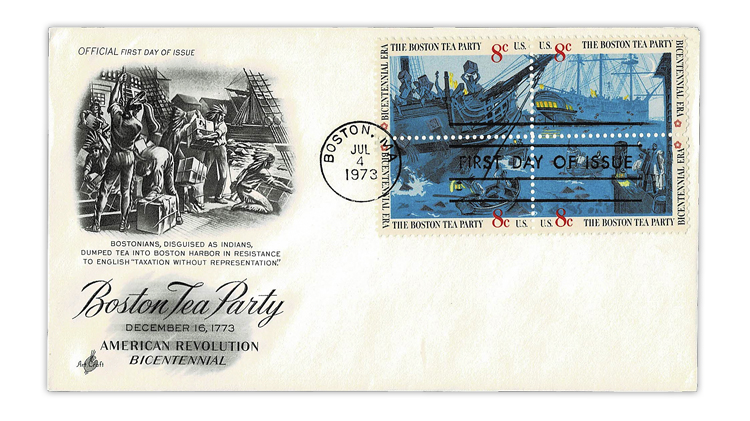 Figure 2. Comparing the block on this first-day cover with the normal example in Figure 1, it is clear there are differences. But what are they? 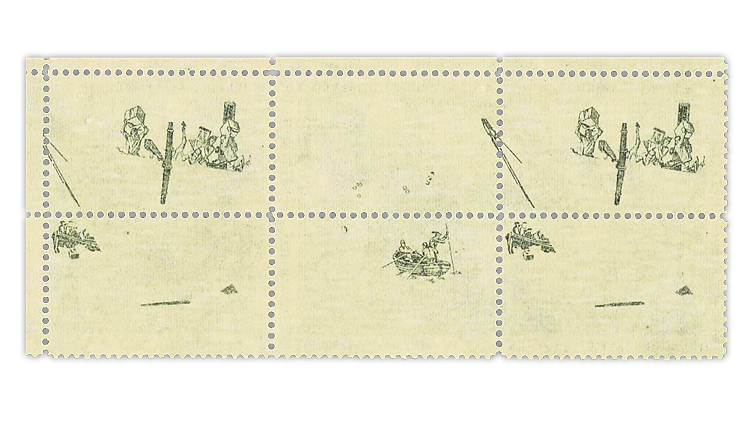 Figure 3. This offset on the back of a block shows the offset-printed black elements and also helps to illustrate where those elements are to be found in the design. 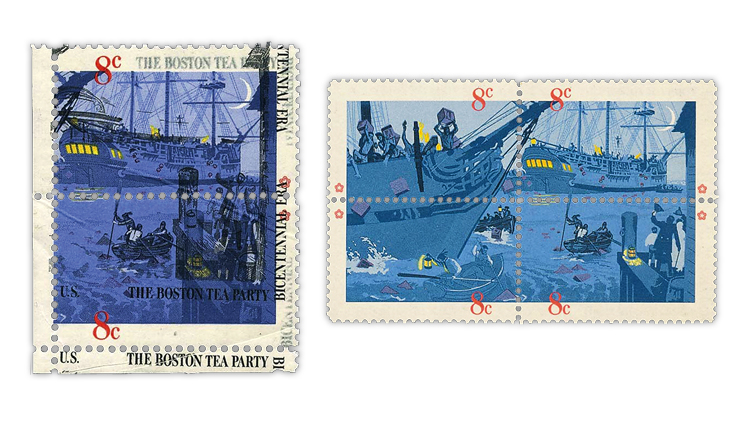 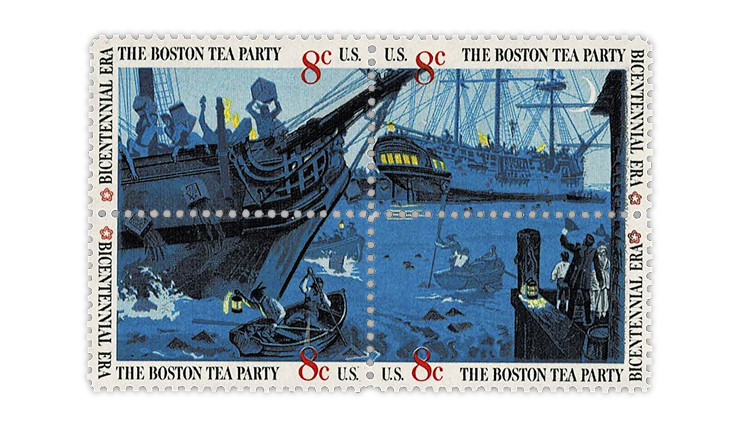 Figure 5. The key to this issue is knowing where the offset black, the intaglio black and the dark blue are supposed to be. On this block, the offset black elements are omitted. 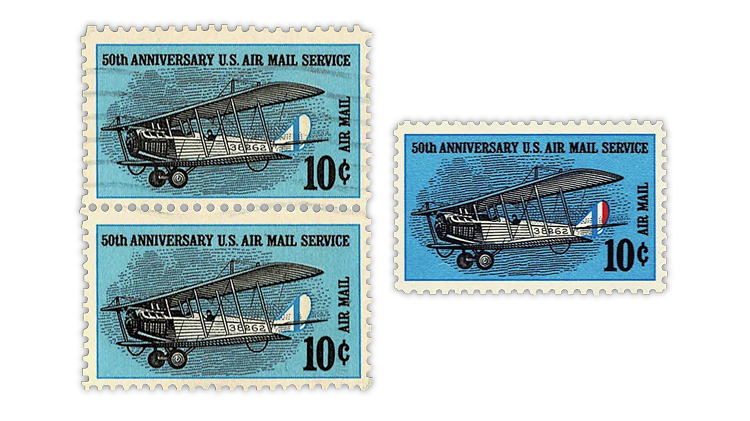 Figure 6. The used pair of 1968 10¢ stamps marking the 50th anniversary of airmail (shown graphically cropped from cover) was altered to make it appear that the red on the tail of the airplane is missing. An unaltered stamp is shown for comparison.
Previous
Next

Certain United States stamps present a huge challenge to expertizers. One of these is the Boston Tea Party block of four se-tenant 8¢ stamps issued July 4, 1973 (Scott 1483a). A normal block is shown in Figure 1.

With the exception of the tagging-omitted error, which has a catalog value mint of $200, the others catalog at nearly $1,000 or more each, so these errors are both scarce and desirable.

In addition to the errors, there are quite a few misregistrations of color between the offset colors and the engraved parts of the designs. These misregistrations can help us understand the color scheme.

The first-day cover shown in Figure 2 was submitted for expertizing to the American Philatelic Expertizing Service (APEX) a few years ago by Jacques C. Schiff Jr. (1931-2017) as a possible dark-blue-omitted error.

Because the designs of the stamps are both complex and dark, with colors overlapping one another to achieve the desired effects, the first problem was to determine what colors were used and what design elements were linked to each color.

Schiff, who was a dealer and auctioneer of errors, freaks and oddities, or EFOs, had done his homework. According to the record he submitted from the Bureau of Engraving and Printing, there were four press passes: offset red and light blue, offset yellow and dark blue, offset black, and intaglio black.

The dark blue parts of the design can easily be mistaken for those in black, making the identification of which design elements went with the two blacks (offset and intaglio) and the dark blue a serious challenge. Besides observation, an article in my clipping file turned out to be key.

It is a Basics and Beyond column, “Finding missing Tea Party ‘mystery’ color,” by William H. Hatton published in the Feb. 18, 1985, issue of Linn’s.

In that column, Hatton used examples with misregistered colors and a block showing the black color printed on the offset press to identify what colors belonged where.

A more recent presentation by Wayne Youngblood was also helpful.

At the American Philatelic Society’s Summer Seminar in 2017, Youngblood showed a major shift of the intaglio black and missing intaglio black as part of a slide show. With thanks for his cooperation, both are shown in Figure 4.

Looking at the pair with the misregistered intaglio black, you can see where that color should be — and where it is not intended to be, most notably in the whaleboat.

The block in Figure 4 shows the intaglio black omitted. Note that the whaleboat is present and complete. The whaleboat is a combination of dark blue and offset black.

Illustrated in Figure 5 is a block of Scott 1483c which, as the offset black is omitted, has only the dark blue part of the whaleboat.

Now we can circle back to the first-day cover in Figure 2. Now that we know the two black colors (offset and intaglio) are, we can differentiate them from the dark blue.

To verify this, compare the block of stamps on the FDC in Figure 2 with the normal block in Figure 1. You will see that the dark blue is lightly printed, but not missing. Pay particular attention to the dark blue windows on the side of the ship on the upper right stamp.

The resulting expertizing certificate stated: “United States, Scott No. 1483a, all colors present, but the dark blue offset is nearly omitted, used on FDC, 7/4/1973, genuine in all respects.”

I should mention that there is a hidden message in this description. Often something not certified as an error is found to be altered — a color removed by chemical or other means. In this instance, the “genuine in all respects” tells the person receiving the certificate that the dark blue was lightly printed, not the result of someone trying to create an error.

For the latest addition to the series of stamps that are not what they seem, see the used pair of 1968 10¢ airmail stamp commemorating the 50th anniversary of airmail (Scott C74) in Figure 6. (The two stamps were graphically cropped from a cover).

Also shown in Figure 6 is a normal example of this airmail stamp.

On the normal stamp, the tail of the airplane has red, white and blue vertical stripes. The red appears to be missing from the two used stamps.

There are three reasons the submitted stamps are suspicious: The blue background on the used stamps is much lighter than normal. Used errors are unusual, and they are faked more often than mint stamps as the forger does not need to worry about preserving pristine gum. Finally, there are no known certified examples of missing red on this stamp. It was once listed as Scott C74a, but was delisted when the example proved to be faked.

Careful examination of the submitted stamps shows that they also have been altered to try to remove the red, but a shadow of the color remains.