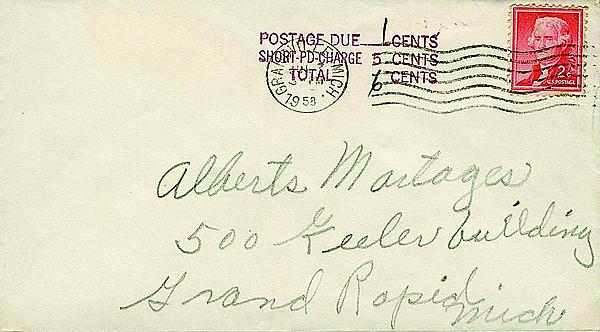 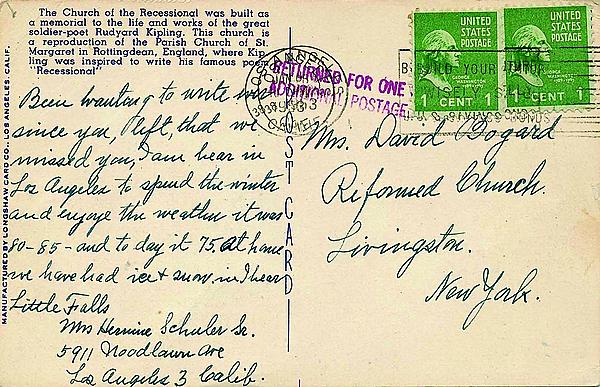 Figure 3. This 1953 postcard was mailed after a rate change increased the rate for a domestic first-class postcard from 1¢ to 2¢. Initially mailed with a single 1¢ George Washington stamp, it was returned to the sender for an additional 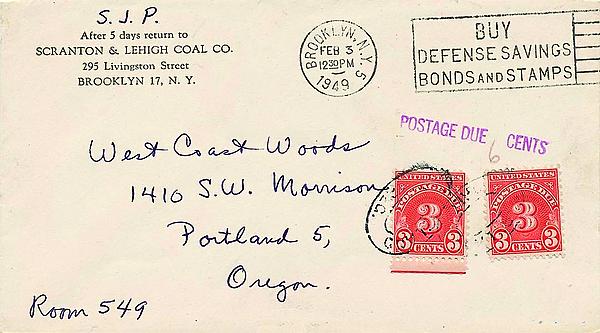 Figure 2. This 1949 cover was mailed without postage and assessed 6¢ postage due, or twice the normal first-class postage, which was collected from the addressee.

Figure 1. This shortpaid 1941 first-class letter was franked with a single 3¢ stamp, though it weighed up to 3 ounces and therefore required 9¢ in postage. It was marked 8¢ postage due, which was paid by the addressee.

This is the first of two Modern U.S. Mail columns that will describe how, during the period of 1928 to 2014, the United States Post Office Department and then later the U.S. Postal Service handled shortpaid domestic surface first-class covers that were not held for postage.

Prior to July 1, 1928, all first-class mail for which one full rate of postage had been prepaid was forwarded to its destination but charged with the unpaid rate, to be collected on delivery.

Also before that date, if the postage was shortpaid one rate or part of that rate at the mailing office, the mailed item was to be returned to the sender (if he was known, or if the mailpiece included a return address), and the additional charge of the deficient postage was to be collected from the sender.

Other such mail was held for postage and is not discussed here.

Finally, before that date, if an unpaid first-class letter inadvertently reached the delivery office, twice the postage was due, to be collected from the addressee.

During this period, the placement of canceled postage due stamps at delivery offices indicated the postage due had been collected from the addressee.

Effective July 1, 1928, the Postal Laws and Regulations were amended to add the following regulation: “If the postage paid was short more than one rate, the deficient postage and an additional charge of 1 cent for each ounce or fraction short-paid was to be collected.”

The April 21, 1941, first-class shortpaid cover in Figure 1 exemplifies both a cover paid one full rate of postage, and also shortpaid more than one rate.

Weighing up to 3 ounces, and therefore requiring 9¢ postage, this domestic-mail surface envelope is franked with only a single 3¢ Thomas Jefferson stamp from the 1938 Presidential definitive series (Scott 807).

It was correctly sent on to the delivery office where it was marked “DUE 8 CENTS,” representing the shortpaid 6¢ postage and two 1¢ penalty charges, for a total of 8¢ due.

The canceled 8¢ in postage due stamps (one example of Scott J81, the 2¢ stamp, and two examples of Scott J82, the 3¢ stamp) indicates that the addressee paid the 8¢ due.

The 1949 up-to-one-ounce cover in Figure 2 was mailed without postage and inadvertently reached the delivery office in Portland, Ore. Therefore, twice the postage, or 6¢, was due. The cover was marked “POSTAGE DUE 6 CENTS,” and the amount was collected from the addressee, as indicated by the two canceled examples of the 3¢ postage due stamp (Scott J82).

The 1953 postcard in Figure 3 was mailed after the rate change of Jan. 1, 1952, which increased the domestic surface rate for postcards from 1¢ to 2¢. The postcard was initially franked with only a single 1¢ George Washington stamp from the Presidential series (Scott 804).

The card was identified as shortpaid 1¢ at the mailing office, was marked “RETURNED FOR ONE CENT ADDITIONAL POSTAGE,” and was returned to the sender for the additional stamp.

After the second 1¢ George Washington stamp was placed on the postcard, it was mailed fully paid to the addressee.

The final example of a shortpaid letter during this period is shown in Figure 4.

It was mailed shortpaid 1¢ on July 7, 1958, during the one-month period where there was a 5¢ penalty fee added to the shortpaid amount.

The 1954 2¢ Liberty series Thomas Jefferson stamp shortpaid by 1¢ the then-current first-class surface domestic rate of 3¢ per ounce. Thus, the 1¢ postage due plus the 5¢ penalty fee — a total of 6¢ — was due from the addressee.

Since no postage due stamps are placed on the letter, it is unknown whether the postage due was collected.

These four shortpaid covers illustrate all the ways that first-class domestic surface mail that was shortpaid and not held for postage was handled from July 1, 1928 until Oct. 8, 1958.