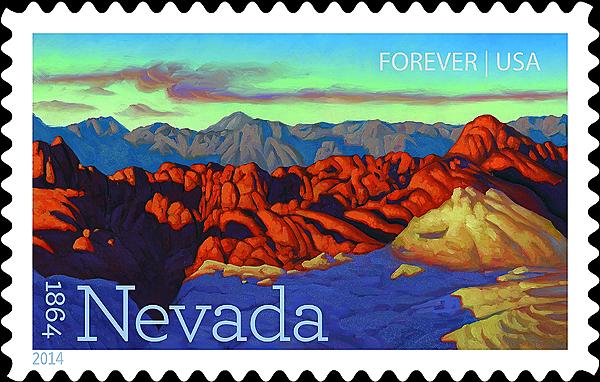 A new United States forever stamp marking 150 years of Nevada statehood will be issued May 29, with a first-day ceremony at the Smith Center for the Performing Arts, 361 Symphony Park Ave., Las Vegas, Nev.

U.S. Postal Service board of governors vice chairman James H. Bilbray will participate in the 11 a.m. event. The stamp will go on sale nationwide the same day in panes of 20.

The state of Nevada is famous today in part for its Las Vegas and Reno gambling and tourist attractions, but in 1864 the Nevada territory was home to fewer than 40,000 inhabitants. The big draw then was the discovery five years earlier of rich silver deposits at Virginia City, but much of the land throughout the territory was unsettled and undisturbed.

The new stamp will celebrate the state’s still-expansive natural beauty with an illustration by Nevada native Ron Spears that shows a view from Valley of Fire State Park, near the town of Overton and the northern part of Lake Mead in southern Nevada.

The central vignette in the horizontal scene features red and gold sandstone formations in Fire Canyon, with deep purple and blue shadows. The region is part of the northeastern Mojave desert and experiences an average annual rainfall of about four inches.

The designer and art director for the new stamp is Antonio Alcala. The stamp was offset-printed by Banknote Corporation of America for Sennett Security Products.

Lincoln also anticipated correctly that he would find support in the strongly Republican new state for his proposed Constitutional amendment banning slavery, which was passed the following January.

Several U.S. stamps have commemorated Nevada in different ways, including a 1951 3¢ stamp designed by Charles R. Chickering to mark the centenary of the settlement of Nevada (Scott 999).

The centenary of that 1859 silver strike was featured eight years later with a 4¢ stamp depicting Henry Comstock, for whom the famous Comstock lode is named.

The 2002 34¢ and 37¢ Greetings from America commemoratives for Nevada (Scott 3588 and 3723) show off the state’s desert landscape along with two iconic illuminated Las Vegas signs.

The state’s population today is close to 2.8 million. Nearly three-quarters of the residents live in Clark County, which includes Las Vegas.

Press sheets for the Nevada Statehood stamp will be issued both with and without the die cuts that normally separate individual stamps. A total of 2,500 sheets will be issued for each variety. The press sheet comprises 12 panes of 20 stamps and sells for $117.60.

A digital color postmark offered on USPS envelopes depicts an outline of the state and the mountain bluebird, the Nevada state bird.

First-day cancel ordering information
Standard ordering instructions apply. Collectors requesting first-day cancels are encouraged to purchase their own stamps and affix them to envelopes. The first-day cover envelopes should be addressed for return (a removable label may be used), and mailed in a larger envelope addressed to Nevada Statehood Stamp, USPS Customer Relations Coordinator, 1001 E. Sunset Road, Room 1030, Las Vegas, NV 89199-9998. Requests for first-day cancels must be postmarked by July 28.

The Postal Service’s uncacheted first-day covers for the Nevada Statehood stamp is item No. 472216 at 93¢.