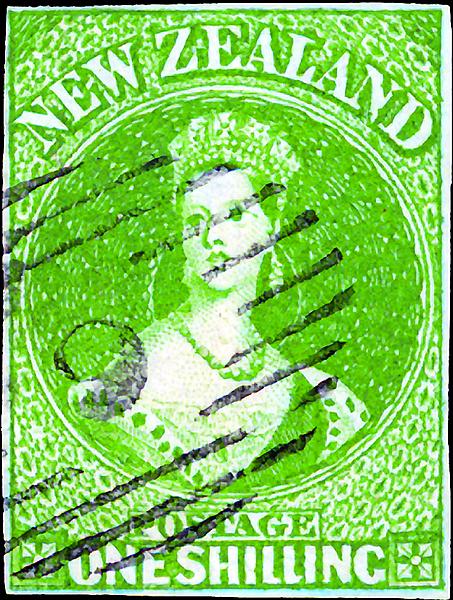 This attractive example of the 1855 1-shilling pale yellow green Queen Victoria on blued paper is among the highlights in the selection of New Zealand and Dependencies stamps from the “Grahway” collection. Auctioneer Daniel F. Kelleher esti 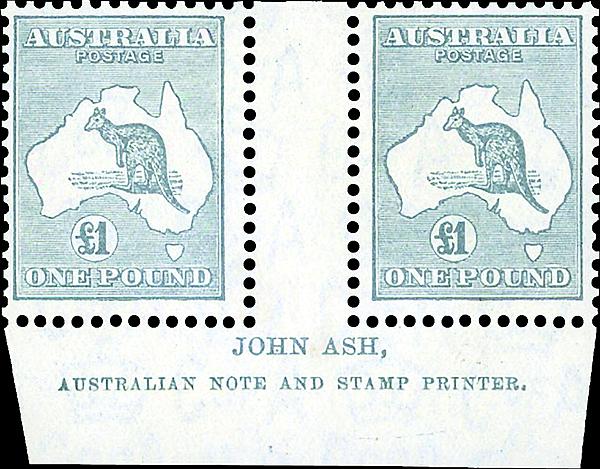 This imprint pair of the 1935 £1 gray Kangaroo and Map stamp is estimated at $5,000-$7,500 in the Oct. 23 Daniel F. Kelleher Auctions sale of the “Grahway” collection of Australia and States and New Zealand and Dependencies.

The “Grahway” collection of Australia and States and New Zealand and Dependencies will be dispersed to new owners at noon Oct. 23, when Daniel F. Kelleher Auctions hammers it down at the American Stamp Dealers Association National Postage Stamp Show in New York City.

In honor of the ASDA’s 100th birthday, the show will be held Oct. 23-26 at the Hilton Hotel, located at 1335 Avenue of the Americas in downtown Manhattan.

More than 500 lots of material will be available for bids, in a range of price estimates to fit almost any collector’s budget. The collection spans multiple eras, from classic issues of the 1850s to modern errors of the early 2000s.

A choice selection of stamps from New South Wales will open the sale, including numerous examples of the 1850 Sydney View stamps and the Queen Victoria stamps of 1853-56. Also to be offered are a handsome array of Queen Victoria die proofs.

Stamps in the Queensland selection include attractive examples of the Queen Victoria Chalon Head stamps of 1860. Several of the stamps are offered in pairs.

Among the larger multiples in South Australia is two blocks of four of the 1877 1-shilling red brown Queen Victoria that Kelleher describes as “tied on piece by Adelaide Ship Mail Room duplex cancels” dated Nov. 19, 1883. The piece is estimated at $100-$150.

If your collecting tastes tend toward the unusual, you might consider bidding on one of the three Tasmania 1853 “Van Diemen’s Land” reprint proofs that were pulled from defaced plates. Kelleher describes each as a “full sheet of 24 with Best and Coard imprints.” One sheet is estimated at $1,000-$1,500; the other two at $750-$1,000 each.

Various half-length Queen Victoria stamps of 1850-55 are among the highlights of the Victoria offerings, while Western Australia is well represented with many attractive Swan stamps from 1854-1907.

Australia is represented with an excellent selection of Kangaroo and Map stamps. One of the highlights, shown on page 1, is an unused “John Ash” imprint pair of the 1935 £1 gray Kangaroo and Map stamp (Scott 128), which Kelleher estimates at $5,000-$7,500. In the description, Kelleher states that both stamps are never hinged, and that the pair is “barely hinged in [the] bottom selvage only.”

In the accompanying description, Kelleher states that the stamp possesses “four clear margins and vibrant color with nice ‘ivory head.’”

A 2012 Ceremuga certificate, which accompanies, describes the stamp as a “Superb example.” Kelleher estimates the stamp at $3,500-$5,000.

Collectors of modern errors will be pleased to see a handful of such items from New Zealand. Most are from the 1970s.

To learn more about this and other upcoming Daniel F. Kelleher sales, visit the website kelleherauctions.com, or call 203-297-6056.