A first-day cover of Egypt’s Suez Canal stamps that mistakenly show the Panama Canal. The three stamps were issued Aug. 5, and new stamps were 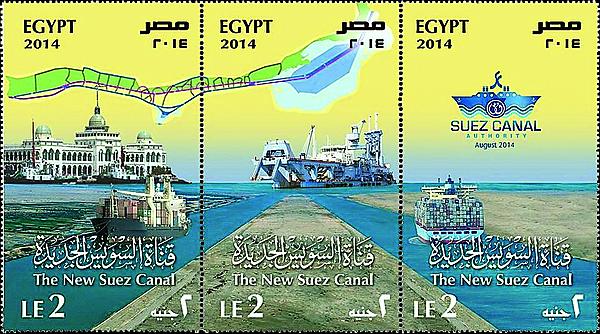 On Sept. 12, Linn’s Stamp News posted a story online at Linns.com with the headline “New Suez Canal stamp shows Panama Canal.” Over the next several days, other news sources also reported on the design error.

On Tuesday, Sept. 16, Egypt issued the new version of its Suez Canal stamps.

This time, instead of showing locks of the Panama Canal, the stamp in the center of the se-tenant strip of three shows the Suez Canal in Egypt.

Ships are pictured on all three £2 stamps, and the Suez Canal Authority administration building in Port Said is featured in the design of the stamp on the left.

Also, unlike the first version of Egypt’s stamps commemorating plans to build a new Suez Canal, the new stamps all are inscribed in English, “The New Suez Canal.”

According to a report in the online edition of Cairo Post, Egypt’s postal authority ordered sales of the stamps with the design error halted on Saturday, Sept. 13. They were issued Aug. 5.

Linn’s received the first-day cover shown here in a package with other FDCs from Egypt’s philatelic office.

The Cairo Post article also said that Minister of Communications and Information Technology Atef Helmy has “ordered an investigation into who was responsible for the error.”

Although the Minister of Communications and Information Technology’s website does not specifically mention the stamps in a Sept. 16 report about Helmy’s visit to the Suez Canal development project, a photograph shows Helmy and two other men unveiling the new designs.

In addition to appearing online, Jay Bigalke’s report on the Egyptian stamps showing the wrong canal was published on page 1 in the Sept. 29 issue of Linn’s.