Baby Boomers and Millennials: Can the hobby attract both generations? 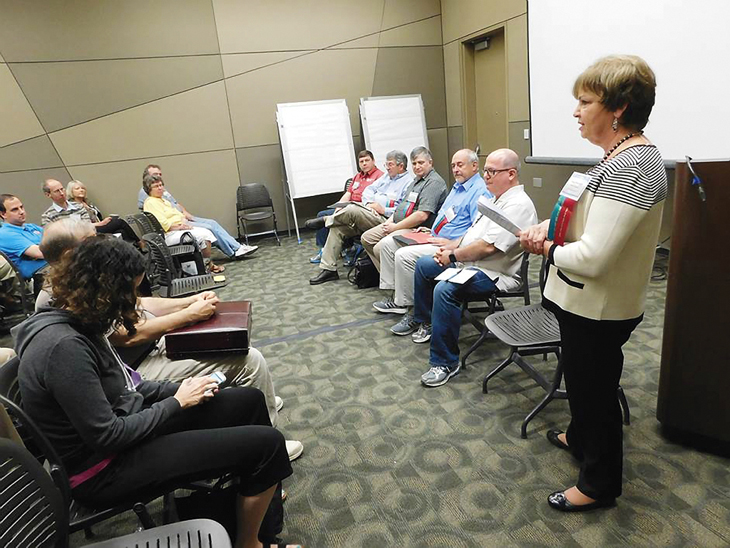 Members of the Linn’s Editorial Advisory Board share ideas on “The State of the Hobby” during an open-forum discussion at the APS Stampshow in Grand Rapids.
Previous
Next

Eleanor Roosevelt said, “Great minds share ideas …,” and Linn’s is fortunate to have thoughtful leaders of the stamp hobby on its Editorial Advisory Board.

Board members participated in a lively discussion of “The State of the Stamp Hobby” Aug. 21 at the American Philatelic Society Stampshow in Grand Rapids, Mich. The panel discussion was open to the public, and audience participation was encouraged.

The first question asked of the panel was: “What has been the most positive development in the stamp hobby and the stamp market during the past five years?”

While most of the panel agreed that the Internet has played the biggest and most important role in changing the hobby, Murphy, whose company specializes in authenticating and grading United States stamps, offered a different opinion:

“Grading, not the last five years but 10 years, has created a lot of excitement.” Murphy said that grading has encouraged people to look closer at their stamps and study them. He believes grading has been a great motivator for stamp collectors.

Jim Lee shared that 90 percent of his business today comes from the Internet or phone conversations. He said the average age of his Internet customers is 35 to 45. He said he also finds that the financial market is a great source of new customers because people in the financial industry are well-educated, have a “bent toward history,” and are looking for new forms of relaxation.

The next topic of discussion was “What can be done to reconnect Baby Boomers who collected during childhood with the hobby?”

Reasoner said, “This to me is the million-dollar question; this is the most important question in this series of questions here. …We need to work more on growing the hobby.”

He observed that organized stamp collecting groups spend far too much of their resources on 7 to 12 year olds. In his opinion, we need to work more on growing the hobby and change our target to the older age groups.

Reasoner recently formed a task group to recruit Internet-only collectors and dealers into organized philately to attract adults who have discretionary time and income.

Lee said, “People are inherent collectors; they collect something.” Our goal should be to find a way to tap into their need to collect and to introduce them to philately “because people are natural collectors.” He said to look at the ratings for the television show American Pickers as proof of people’s desire to collect.

Kim Kellerman said “J.W. Marriott began building retirement communities directly aimed at baby boomers. … What groups can we find to give us some insight into what is important to Baby Boomers?”

Murphy, who was the youngest of the panelists, said he wasn’t exposed to stamp collecting as a child. He believes the hobby needs to reach potential collectors by having a huge Internet presence. He encouraged stamp shows to use billboards to advertise stamp shows. “Kudos to the APS for advertising the stamp show with a billboard,” he said. A billboard promoting Stampshow could be seen from the highway leading into Grand Rapids.

Murphy disagreed with the idea that Baby Boomers are the answer to attracting more collectors. He said hobby leaders should broaden their focus and look at adults who are 40 or younger. Again, the panel agreed that the Internet is the answer.

Henry Gitner said the real question that needs to be answered is why people collect. In his opinion, one of the big reasons is history.

He said the classic profile of a stamp collector has changed, but leaders need to identify why people collect stamps. Gitner suggested that organizations do something with the History Channel because people who watch this television station are the same type of people who might become stamp collectors.

Murphy said he sees commercials for coin collecting on late-night TV. He suggested stamp collectors expose people to the hobby by placing quality hobby information on TV and the Internet.

The panel was asked, “How can Linn’s help increase the number of collectors who participate in organized philately?”

He suggested that Linn’s give out free copies to libraries or other places to expose others to stamp shows and other opportunities.

Murphy pointed out that Linn’s is targeted to collectors who already know about the hobby. “Getting Linn’s into the hands of non-collectors is the biggest way that Linn’s can help grow the hobby,” he said.

I explained to the audience that Linn’s is working to increase traffic to its website by increasing its exposure on search sites such as Google.

The suggestion was made, only half tongue in cheek, that Linn’s should try to get the Postal Service to subsidize mailing Linn’s to various libraries and groups.

Lee suggested that the APS and Linn’s should work together to gather data and talk to members and subscribers to determine where the hobby should be looking for new collectors and target our efforts.

A member of the audience observed that we need to get unidentified collectors who are using the Internet and introduce them to the organized hobby.

Murphy said that younger people are less interested in clubs even though they may collect stamps. They communicate digitally. “Stamp shows open their eyes as to what is available,” he observed.

Kellerman said, “The Millennials are interested in the experience.” We need to attract them with virtual experiences.

The final question was, “If you became the editor of Linn’s tomorrow, what changes would you make?”

“Digitize all Linn’s articles and put them online,” said Lee. “Collectors are interested in history.”

The panel also agreed that Linn’s needs more human interest stories. Kellerman suggested Linn’s create real-time activity on Facebook. Murphy said we should try streaming podcasts and expand digital content to include more than the content in the print Linn’s.

The panel presented creative ideas that are sure to spark lively discussions among Linn’s editors.