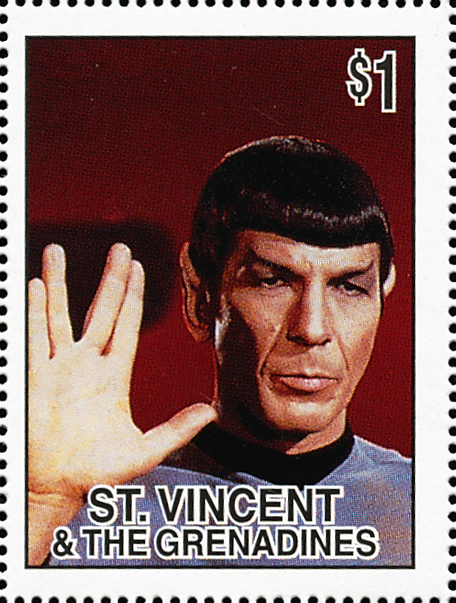 A $1 stamp featuring Leonard Nimoy in his Star Trek role as science officer Spock was issued by St. Vincent and the Grenadines in 1996.

On July 3, 1991, Nimoy participated in the design unveiling for the 10 29¢ Space Exploration stamps that would be issued Oct. 1, 1991, to celebrate National Stamp Collecting Month. The actor was also featured in his Federation uniform on a U.S. Postal Service poster promoting the stamps.

Star Trek has been commemorated on stamp sets from many countries, including Antigua and Micronesia in 2008, and Liberia and Maldive Islands in 2009; these sets and others include individual stamps that picture Nimoy as Spock.

The United States Postal Service issued a 33¢ Star Trek stamp picturing the starship Enterprise in 1999 as part of the Celebrate the Century series.

The $1 stamp pictured here is an early issue from St. Vincent and the Grenadines. The pane of nine different stamps was issued in 1996 to commemorate 30 years of Star Trek.