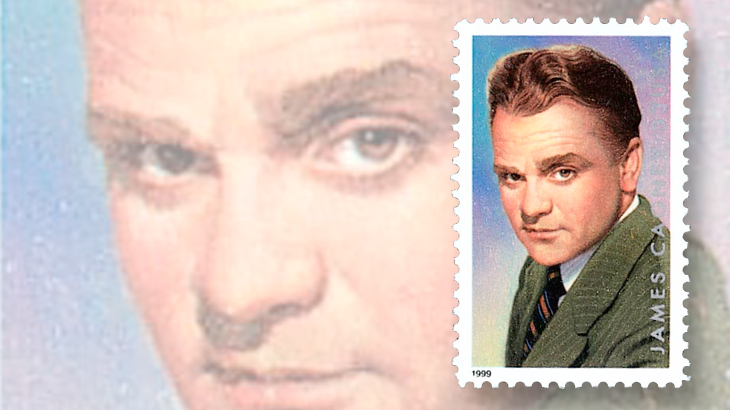 Oscar-winning actor James Cagney was honored on a 33¢ Legends of Hollywood commemorative stamp in 1999.

The fifth honoree in the U.S. Postal Service's Legends of Hollywood commemorative stamp series was James Cagney, whose 33¢ stamp (Scott 3329) was issued in 1999, just five days after the actor's 100th birthday.

James Francis Cagney Jr. was born into poverty on July 17, 1899, in New York City. As a young man he worked a variety of odd jobs before taking on small parts in vaudeville productions and on Broadway. In the 1930s he was featured in gangster films, including a breakthrough turn in The Public Enemy in 1931.

From there his star rose swiftly, and Cagney was under contract to Warner Bros., making a variety of films, including some, such as Footlight Parade (1933), that showed off his considerable skill as a dancer.

He was nominated for an Academy Award as best actor for Angels with Dirty Faces in 1938, and won for his portrayal of George M. Cohan in 1942's Yankee Doodle Dandy. A third nomination came in 1956 for the previous year's Love Me or Leave Me, a musical that also starred Doris Day.

Cagney chose to retire in the 1960s, returning only at age 82 for the role of Police Commissioner Rhinelander Waldo in the 1981 film Ragtime. He died in 1986.