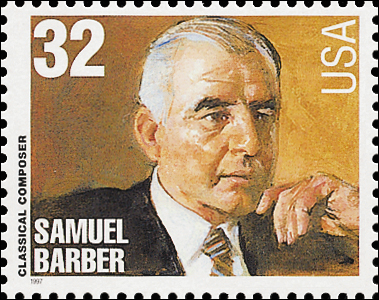 Samuel Osborne Barber II was born March 9, 1910, in West Chester, Pa., and showed early talent as a composer and vocalist. He studied voice, piano and composition at the Curtis Institute, and following military service in World War II he received numerous commissions.

Barber twice received the Pulitzer Prize for his compositions: in 1958 for the four-act opera Vanessa, and in 1962 for his Piano Concerto.

In 1966 he completed his opera Antony and Cleopatra, which was performed by the Metropolitan Opera for its opening at Lincoln Center.

His lyrical Adagio for Strings, completed in 1936, is lauded as Barber's most famous composition.

Samuel Barber is commemorated on a 32¢ stamp issued Sept. 12, 1997, in Cincinnati, Ohio. The stamp (Scott 3162) is part of the Classical Composers and Conductors set of the American Music commemorative series. The stamp design was illustrated by Burt Silverman, who used as his model a Library of Congress photograph taken by Nathan Broder.