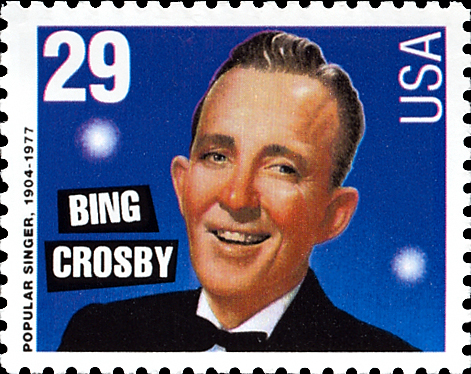 Entertainer Bing Crosby was born Harry Lillis Crosby Jr. on May 3, 1903, in Tacoma, Wash. After a brief stint with a local dance band, Crosby teamed up with a friend from the group, Al Rinker, and they drove to Los Angeles in 1925, entertaining audiences on the West Coast vaudeville circuit.

Crosby attracted the attention of record executives and was soon performing in night clubs and recording hits by top American songwriters, including Cole Porter and Irving Berlin.

By the 1930s, Crosby was appearing in feature films as well, with starring roles in The Big Broadcast in 1932, College Humor (with George Burns and Gracie Allen) in 1933, and several others.

With a nightly CBS radio network show further cementing Crosby's popularity, he went on to become one of America's most famous entertainers.

In the 1940s he captivated audiences with a series of humorous "Road" films co-starring comedian Bob Hope and singer/actress Dorothy Lamour.

In 1942, he recorded White Christmas, which became the best-selling single in history.

Two years later he won a Best Actor Academy Award for his role as Father Chuck O'Malley in Going My Way.

His reach expanded to television with a series of his own in the 1960s, and a run of popular Christmas specials with his wife Kathryn and the Crosby children.

Crosby recorded dozens of albums over the course of four decades, and was also an innovator in recording techniques that shaped the future of the industry. He was a devoted sports fan, a generous philanthropis, and donated his time to perform on the USO circuit.