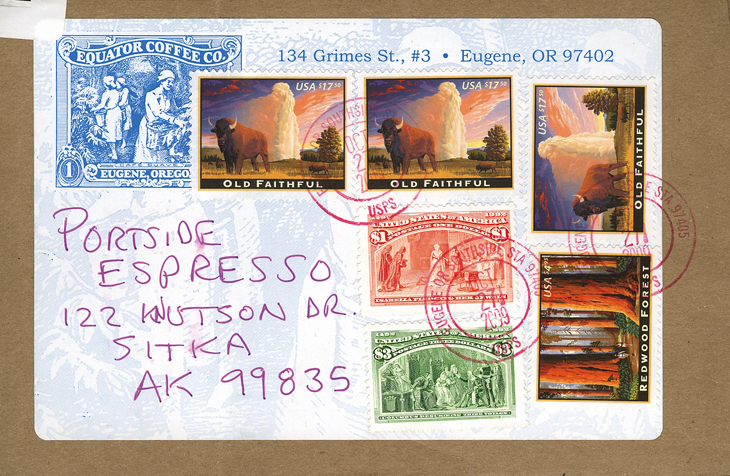 Three $17.50 Old Faithful Express Mail stamps pay the bulk of the postage on this parcel front that was mailed in October 2009 from Eugene, Ore., to Sitka, Alaska. The attractive return address label indicates the contents were coffee. 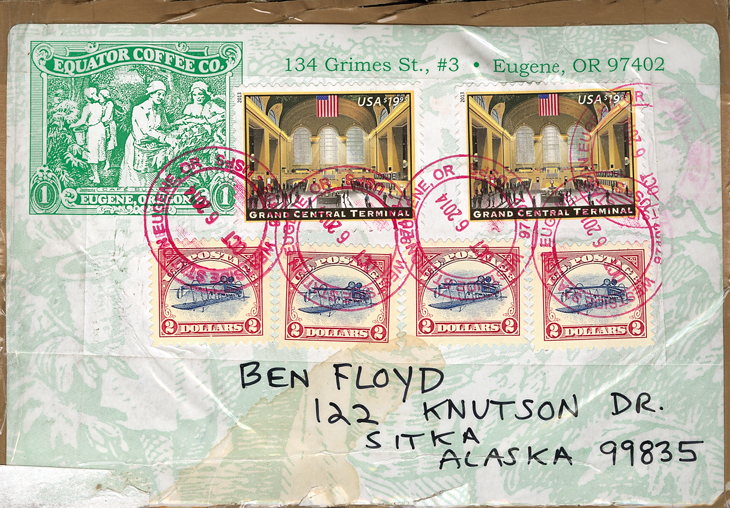 This parcel front, also used to ship coffee, bears two $19.95 Grand Central Terminal stamps and a quartet of $2 Jenny Invert stamps. The green color of the return address label brings out the vibrant colors of the stamps.
Previous
Next

It is always fun to receive feedback from Dollar-Sign Stamps readers, particularly when they share interesting items of postal history.

Roberts told me that the parcels contained coffee and were mailed to a former customer in Alaska.

Pictured nearby is one of two parcel clippings that I found particularly attractive.

Aside from the marvelous stamps (all favorites of mine), I also like the blue return address label of the Equator Coffee Co. that Roberts affixed to his coffee mailing before applying the stamps.

Almost five years later, Roberts sent the second parcel front pictured nearby to the same address in Sitka. This time, the package was mailed from the Westside Station post office in Eugene.

Roberts told me that he mailed “dozens” of packages with similar frankings, “but unfortunately the Alaska business is no more.”

It would be tempting to some collectors to remove the stamps from the clippings, but I prefer to leave them right where they are.

In this way, the purpose for which they were used is preserved for future postal historians to appreciate and study.

I welcome your stories and items about United States dollar-denominated commemoratives and definitives. Write to Dollar-Sign Stamps, Box 4129, Sidney, OH 45365-4129.