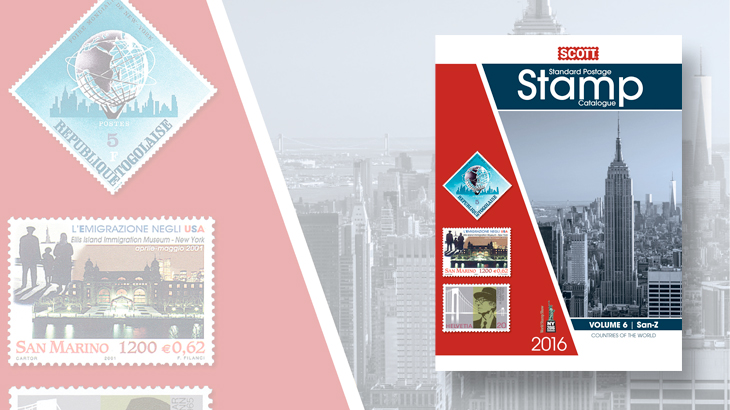 Singapore soars ahead, with more than 2,150 value changes recorded in Vol. 6 of the 2016 edition of the Scott Standard Postage Stamp Catalogue. Values reflect a mixed bag of ups and downs.

The more than 9,900 value changes in Vol. 6 of the 2016 edition of the Scott Standard Postage Stamp Catalogue reflect the current market for countries of the world SAN (San Marino) through Z. Countries that received considerable attention from the Scott catalog editors this year include Singapore, Togo, Tristan da Cunha and Tunisia.

Singapore leads the way, with 2,154 value changes. A mixed bag of increases and decreases occur in the early issues. From 1966 on, the changes are overwhelmingly decreases, reflecting a stagnant market.

More than 1,550 value changes in Togo reflect a downward trend for this country. The decreases far outnumber the increases in this country located in western Africa. The first stamp issue under British rule shows a mixture of increases and decreases for stamps with the first (wide) overprint setting (Scott 33-45) and second (narrow) setting. Significant increases occur in the inverted overprint varieties for the first setting. The unused value of Scott 37a moves from $9,000 to $10,000. The used value shows a decrease of $1,000, from $4,000 to $3,000. Scott 45a, another inverted overprint, jumps from $12,000 unused to $15,000. Values for many of the French occupation issues show general signs of weakening. The 1915 5-centime on 3-pfennig brown surcharged in sans-serif type (Scott 164) falls from $24,000 to $21,000 unused and from $5,250 to $4,500 used.

A thorough review of Tunisia yielded just north of 1,400 value changes. Moderate decreases prevail throughout, with a few increases interspersed. The 1928 10-centime on 15c brown on orange paper double surcharge (Scott 116c) slides from $140 to $125. The double surcharge, one inverted, variety of the 1938 65c on 50c with black surcharge (146) moves from $200 both mint and used to $175. The 1914 2-franc on 5fr black on yellow paper postage due (Scott J11) jumps from $1.60 mint and used to $3.50. Other back-of-the-book areas, including airmails and parcel post stamps, reflect a softening of the market.

A review of Ubangi-Shari resulted in 237 value changes. The first series of black overprints on Middle Congo stamps (Scott 1-22) show a mixed bag of increases and decreases. Decreases outnumber increases for the remainder of the country, and some of the decreases are significant. For example, the black “OUBANGUI CHARI” overprint omitted variety of the 1924-33 35-centime violet and green (Scott 54) falls from $525 to $275.

The 32 value changes in Southern Nigeria show solid gains, both unused and used.

The former French colony of Senegal reflects many decreases, with a sprinkling of increases within the 346 changes made in the classic period through 1944. The 1903 10-centime on 1-franc bronze-green on straw paper (Scott 56) falls from $92.50 to $80, both unused and used.

The classic period of Southern Rhodesia exhibits significant gains, especially among the vertical pairs and horizontal pairs, imperf between. The horizontal pair, imperf between of the 6-penny lilac and black (Scott 7) rises from $40,000 unused to $45,000. The perf 11½ variety of the 1931-37 1-shilling turquoise-blue and black (Scott 26) shows a $15 gain, from $125 unused to $140.

The 41 value changes in Sweden show a mix of increases and decreases. The sheet of nine of Scott 2545a rockets from $15 both mint and used to $40 both ways. Values have been added in footnotes for modern sheets.

While these comments tend to focus on those countries with larger numbers of value changes, there are changes to be found in many other countries, some of which are easy to overlook. The 98 value changes for Spain show a general weakening across the board. The 18 changes in Tobago and 28 changes in Timor reflect increases. Similarly, the 34 changes in the postage due section of Uruguay reflect upward movement. Scott J17, the 1922 10-centavo gray-green postage due stamp moves from 50¢ to $1. Take some time to look over these and other less-frequented areas for value updates.

Several editorial changes were made this year, including:

South Africa: An important footnote has been added following Scott 16, alerting catalog users that Scott values watermarked stamps of South Africa in the normal upright position. Frame-omitted varieties were added to the 3-penny blue-green and black of the 1930-45 series (Scott 39d), and the 1p carmine and gray (48r) and 1-shilling chalky blue and light brown (62j) of the 1933-54 series. A new major number was added to the 1933-54 series: the 5sh blue-green and black pair (Scott 64C) is valued at $42.50 unused and $21 used. Singles are valued at $1 unused and 40¢ used for both the English and Afrikaans inscribed stamps.

Togo: A souvenir sheet of six was added to the 1961 set commemorating the 150th anniversary of UNICEF. The sheet is valued at $5 mint and $3.50 used.