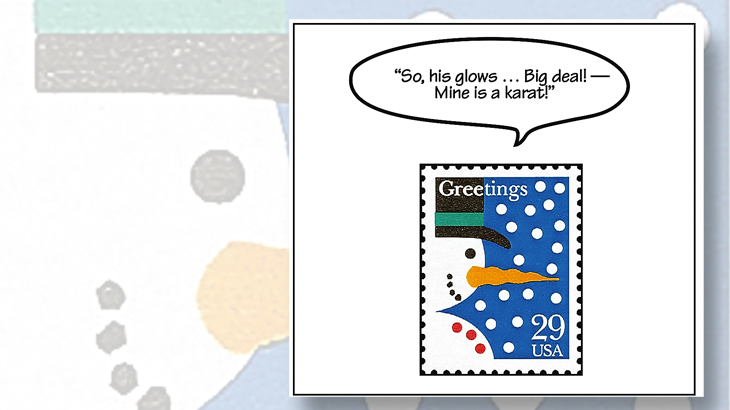 The Pinocchio effect energized many of the Linn’s readers who entered the January cartoon caption contest featuring the carrot-nosed snowman on the 1993 29¢ Christmas stamp (Scott 2793).

One approach came from Richard Long, who has Frosty saying, “When I first announced I was running for president, my nose was only a toothpick!”

John Niehaus pictures Frosty as a spokesman for the U.S. Postal Service with, “Our letter delivery rate has not changed. Hey, why is my nose growing?”

Other entries connected the white snowflakes to the perforating process. David Schwartz of Commack, N.Y., wrote, “I see they found a way to recycle some of the perforator waste.”

The third leading topic —not unexpectedly — was climate change, and Robert Bialo hit that nail on the head with, “Hope they are wrong about global warming!”

On the philatelic side, the winner is Walt Robidoux, who quipped, “Before you know it, this price could snowball into something much bigger!”

The nonphilatelic line winner plays off the story of Rudolph the Red-nosed Reindeer.

“The frozen tundra is no fun, but it if warms up, I’m dead!” by Lawrence Segel of White Plains, N.Y.

“Whoever said, ‘No two snowflakes are the same’ didn’t see what I see,” from Carl Gennette of Holly, Mich.

“Oh, my … I ordered snowflakes, not hail stones!” sent by Steve Zarko of Lewisburg, W.Va.

“I wonder if I’ll get as much media attention as Kaitlyn Jenner if I come out as a snow woman,” from Mary Yahr of West Bend, Wis.

“If my 11-inch nose were an inch longer, it would be a foot!” from Steve Kotler of San Francisco, Calif.

“I’m feeling a bit Frosty out here this morning,” by David Vikan of Dickinson, N.D.

“It ain’t the warming trend that bothers me … It’s that Jingle Bells horse that’s always trying to take a bite of my nose,” by Laura Gilbert of Pasadena, Md.

The next cartoon caption contest will be announced in the March 14 issue of Linn’s.