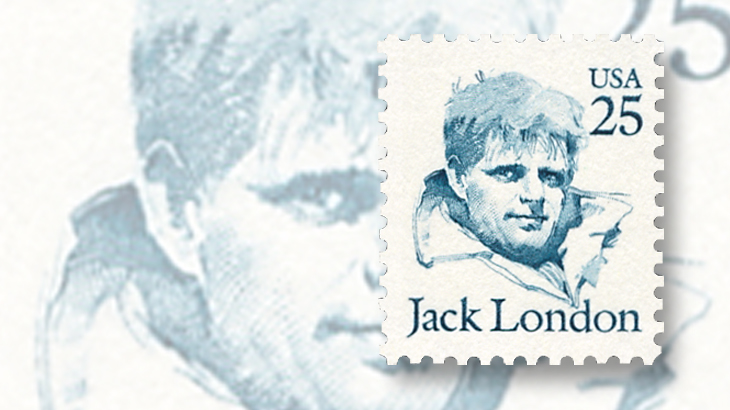 Jack London, the author of The Call of the Wild, on a 25¢ stamp from 1986 in the Great Americans definitive series.

Born John Griffith Chaney in San Francisco, Calif., on Jan. 12, 1876, author Jack London was raised in Oakland and found work as a teenager in a cannery. At 17, he took part in a seal hunting expedition to Japan and wrote about his adventure for a local writing contest, winning first prize.

He studied briefly at the University of California, Berkeley, but traveled to Alaska for the gold rush in 1897. He wrote more short stories and completed The Call of the Wild, his famous short novel set in the Yukon territory, in 1903.

London continued writing short stories and novels that were filled with powerful adventures set in harsh environments. He also addressed political themes and wrote autobiographical novels. Along with The Call of the Wild, his best-known works include The Sea Wolf (1904), White Fang (1906), The Iron Heel (1908), and Martin Eden (1909).

He died at age 40 in 1916, after declining health and suffering from kidney disease.