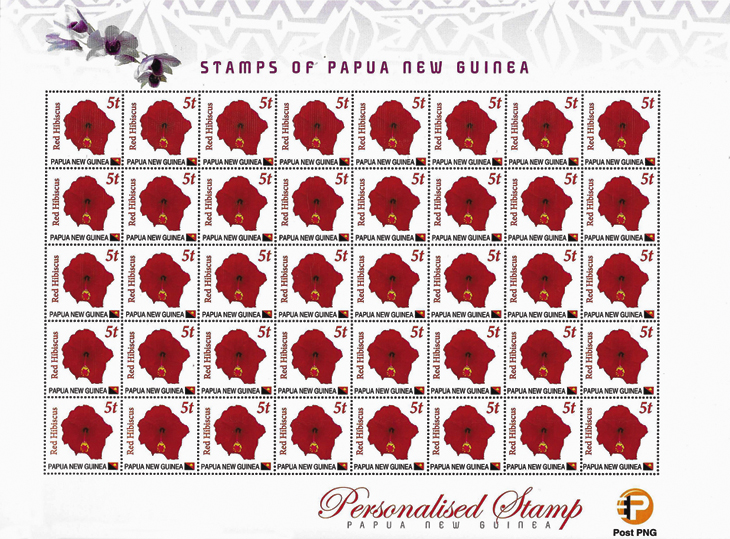 A sheet of 40 of Papua New Guinea’s Red Hibiscus stamp paying the 5-toea make-up rate. Another version of the Red Hibiscus design was produced in sheets of 50. 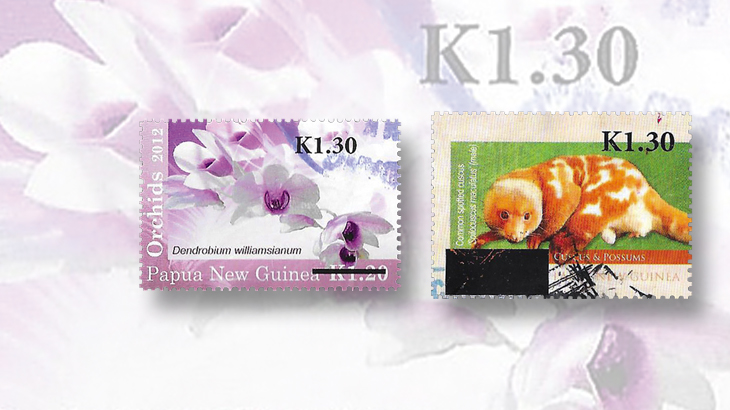 Papua New Guinea surcharged eight stamps in January 2014 with a new denomination of 1.30 kina. The two different means of covering up the original denomination are shown: a horizontal bar (top) and a block (below). 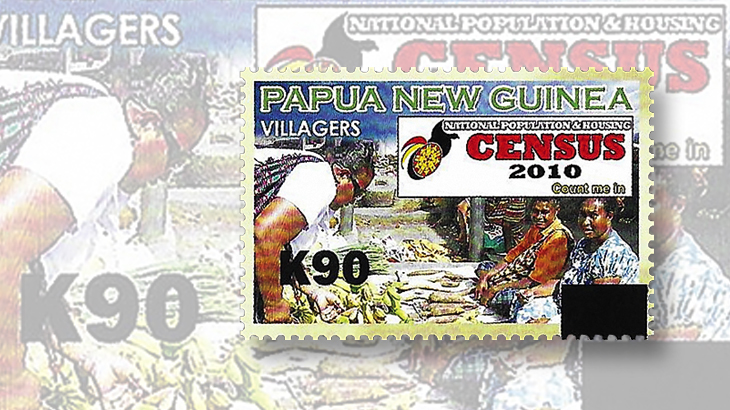 Papua New Guinea’s 2010 3-kina Census stamp was surcharged to 90k, the international rate for parcels weighing from 501 grams to 1 kilogram. 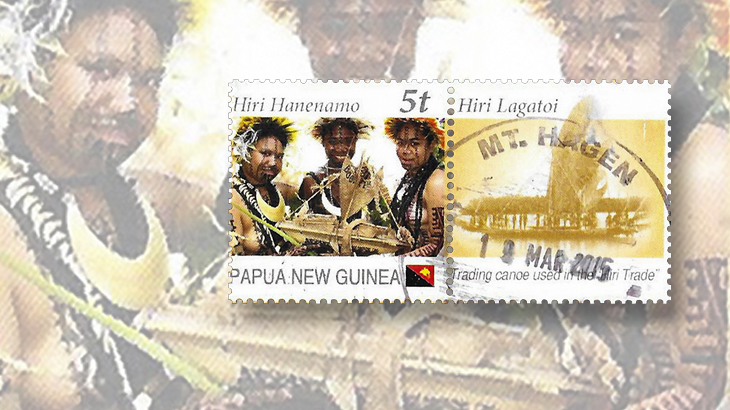 Some of Papua New Guinea’s make-up rate stamps were printed with se-tenant labels. Shown is the 5-toea Hiri Hanenamo stamp with a label attached. 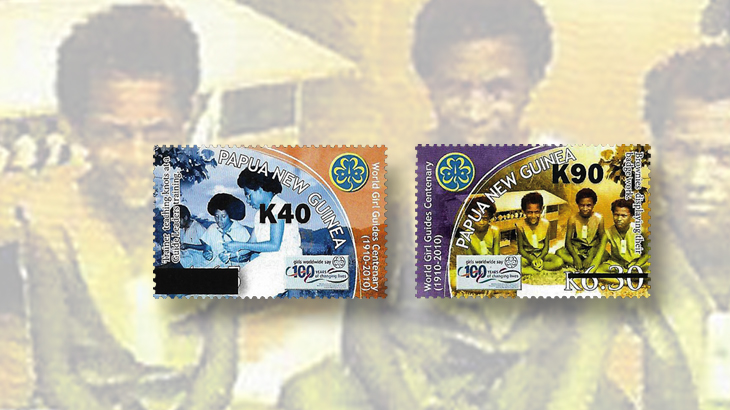 While there were 5-toea and 10t stamps from previous issues, some post offices had already run out of these denominations due to previous increases, thus the decision to surcharge stamps.

After the stamps were revalued to the 1.30k denomination, they were sent to post offices that specifically requested them.

Eight stamps from 2012 were revalued: the Central Province and Madang Province stamps in the Cooking Pots set (Scott 1622-1623), the Common Gray Cuscus and Common Spotted Cuscus in the Marsupials issue (1628-1629), the commemorative honoring track and field athlete Iamo Launa (1634), the Dendrobium macrophyllum and Dendrobium williamsianium Orchid stamps (1640-1641) and the Telefonim Traditional Costumes stamp (1654).

On most of these stamps, a horizontal bar strikes out the initial denomination. However, a block obliteration was used on the Common Spotted Cuscus, Dendrobium macrophyllum Orchid and Telefonim Traditional Costumes stamps.

Also in January 2014, Post PNG decided to act on the need for stamps with high denominations to pay the domestic and international rates to mail parcels.

The local rate for parcels weighing from 215 grams to 500 grams was 15k, which also paid the international rate for 51 grams to 150 grams.

Various stamps were used, all with different initial denominations.

All were printed in-house, and a block obliteration was favored for most of the overprints, except for three stamps that had a single thin bar crossing out the original denomination.

The 15k on 1.05k Urban Safety and Crime Prevention has a single diagonal line, the 90k on 6.30k Girl Guides Centenary has a horizontally line, and the 25k on 6.30k Sea Cucumber has them both.

Distribution to post offices was by request. The first used examples appeared in May 2015.

This time, instead of overprinting stamps, the Post PNG issued 5t and 20t make-up rate stamps.

These stamps were printed with the same equipment that the Post PNG uses to create personalized stamps. The two different 20t stamps, one featuring Ahus dancers and the other showing Morobe dancers, were produced in sheets of 40.

Two different sheet sizes were used for the 5t stamps.

Initially, the 5t stamps were produced in sheets of 50, but when these ran out, the post office used a 40-stamp sheet to create more.

In addition, two 5t stamps were produced in sheets of 40 and in sheets of 20 with se-tenant labels. Again, the graphics were slightly different.

The six 5t designs printed in sheets of 40 include the aforementioned Hiri Hanenamo, Aroma Students of Sogeri National High School, Red Hibiscus and Tokua Airport, plus Birdwing Butterfly and Hiri Lagatoi. The stamps were produced in a quantity of 2,000 stamps each, or 50 sheets of 40.

The two 5t sheets with labels, Hiri Hanenamo and Birdwing Butterfly, had 1,000 produced of each stamp, or 40 sheets.

The 20t stamps were produced in 50 sheet quantities totaling 2,000 stamps of each design.

All of these stamps were distributed on an as-needed basis to the post offices that requested them.

Also, as these stamps were produced in-house arising out of internal needs of the post office, no one thought to include the philatelic bureau in on the distribution, possibly because the quantities were so limited.

Steven Zirinsky, is a full-time architect and a part-time stamp dealer with an interest in modern commercial mail and postal affairs of a variety of countries. He can be contacted through his website.