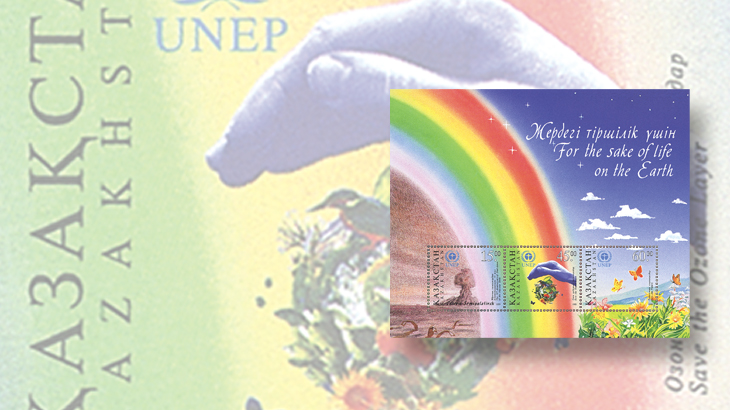 The Kazakhstan Environmental Protection souvenir sheet of three issued in 1999 (Scott 283) is in demand and selling for multiples of the 2016 Scott Standard Postage Stamp Catalogue value of $3.

The ninth largest country in the world and the largest landlocked nation, most of Kazakhstan lies in Central Asia, but a small portion west of the Ural River is technically in Europe.

One of the erstwhile constituent Soviet Republics of the USSR, Kazakhstan was the last to declare its independence, which it did on Dec. 16, 1991. Its population of roughly 16 million people is about 64 percent Kazakh and 24 percent Russian, with Uzbeks, Ukrainians and Germans making up the balance. The Kazakhs speak a Turkic language, but most are bilingual, speaking Russian as well. The population is about 70 percent Muslim and 25 percent Russian Orthodox Christian.

The Baikonur Cosmodrome was a major center of Soviet space exploration. The successor Russian Federal Space Agency maintains a lease on the cosmodrome, and it remains the world’s most active space launching facility.

Having been the unwilling site of Soviet nuclear testing, Kazakhstan has been in the forefront of nuclear test ban activity. In 1999, Kazakhstan issued an Environmental Protection souvenir sheet of three (Scott 283). One of the stamps commemorates the closure of the Semipalatinsk nuclear test site on Aug. 29, 1991. The other two stamps promote saving the ozone layer and protecting nature, respectively. The large rainbow pictured in the selvage runs through two of the stamps.

The 2016 Scott Standard Postage Stamp Catalogue values the souvenir sheet in mint never-hinged condition at $3. The sheet is in demand from topical collectors of nuclear weapons, meteorology and environmentalism and is currently selling in the $10-to-$12 price range. If you see it offered at or near Scott catalog value, it would be an excellent buy.