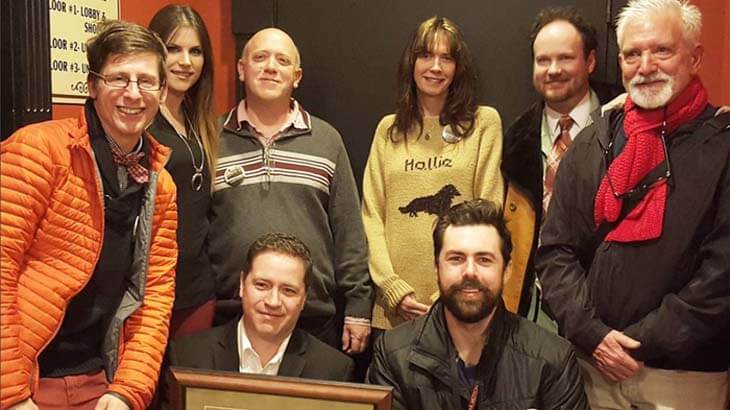 Brian G. Davis (front row, right), director of “The Million Dollar Duck,” poses with wildlife artists and crew members at the world premiere of the documentary Jan. 24 at the Slamdance Film Festival in Park City, Utah.

The journey towards finding the design for a distinguished duck stamp has been put on the big screen via The Million Dollar Duck, an independent documentary that gives an in-depth look at the artists behind these prized pieces of art.

Now a trailer is out telling stamp collectors when they can get a hold of the movie at home.

After its premiere at the Slamdance film festival in January, Discovery Communications’ Animal Planet and Lionsgate picked up the film for distribution in both Canada, the U.S., and Great Britain.

“Animal Planet has acquired television rights to the film while Lionsgate will distribute ‘Million Dollar Duck’ in a limited theatrical release and through digital home entertainment and packaged media,” Variety reported after the premiere in January.

The digital home entertainment release is set for Aug. 9, according to the trailer.

Directed by Brian Golden Davis, the film follows six wildlife artists on their paths towards the Federal Duck Stamp Contest — the only juried art competition organized by the United States government.

As one of the entrants puts it in the trailer, the Federal Duck Stamp Contest is the Super Bowl of duck stamp art.

As 2004 winner Mark Anderson aptly puts it on the offical website of the film, “In music you have the Grammys. If you're an actor, it's the Oscars. If you're a wildlife artist, it's winning the Federal Duck Stamp Contest.”