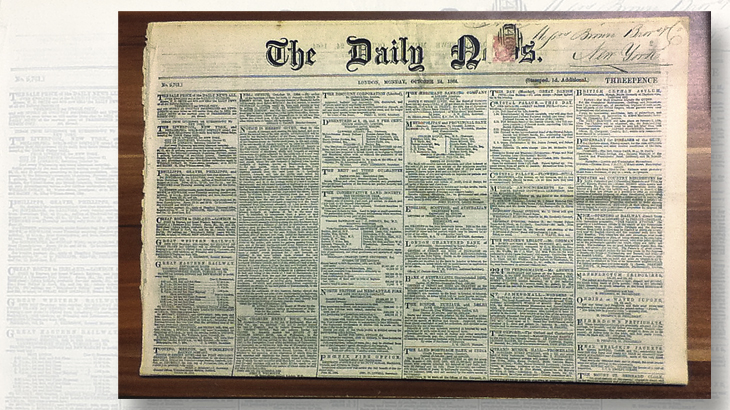 This 1864 copy of The Daily News, recently discovered in New York City, is franked with a single 1862 3-penny pale rose Queen Victoria stamp. At the time of mailing, the rate to send three copies of a newspaper at the same time from the United Kingdom to

A recent renovation of a residential property in New York City revealed a fascinating find in the property’s attic: 45 copies of The Daily News, a London newspaper, dated from 1863 and 1864.

According to information from Rushstamps Retail Ltd. in Lyndhurst, Hampshire, the papers were mailed to Brown Brothers & Co., an investment banking firm based in Manhattan.

What makes the find of particular interest is all 45 papers are franked with a single 1862 3-penny pale rose Queen Victoria stamp (Scott 37).

At that time, the rate to mail three copies of a newspaper at the same time from the United Kingdom to the United States was 3 pence.

As can be seen here, the stamp is affixed to the top of the paper and tied by a barred oval “466” handstamp.

The number 466 indicates that the paper was mailed from Liverpool, where the 3d Queen Victoria stamp was issued, according to Rushstamps.

“The rate for mailing newspapers at that time was one penny and therefore it is very rare to find a newspaper with the 3d denomination. This rare usage for newspapers must be limited to only a few against many thousands of normal letters,” Rushstamps said.

“Because [Brown Brothers] were such a large company, they would have distributed [the papers] to their various departments for reading.

“Quite an amazing story for them to survive in such good condition, after 150 years.”

It seems that whoever saved the papers had philatelic posterity in mind, because apparently only the papers franked with the Queen Victoria stamp survived; the other two from each three-paper mailing did not.

The 3d Queen Victoria on cover is valued at $550 in the Scott Classic Specialized Catalogue of Stamps and Covers 1840-1940.

A use on a newspaper such as the one shown here would likely command a higher price in the marketplace.