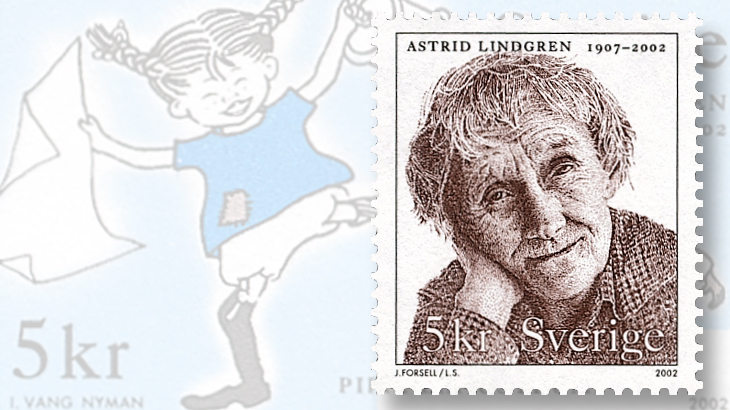 Sweden issued a 5-krone stamp honoring author Astrid Lindgren as part of a booklet set in 2002.

Astrid Lindgren, the Swedish author of popular children’s books including Pippi Longstocking, was born Nov. 14, 1907, on a farm near Vimmerby, Smaland, Sweden. She showed a talent for writing as a youngster, and after moving to Stockholm, she married and began creating stories to tell her children.

The name Pippi Longstocking (Pippi Langstrump in Swedish) came from the imagination of Lindgren’s young daughter, Karin. Lindgren developed the tales of the free-spirited red-haired girl that led in 1945 to the first book in a successful series.

The book series includes three chapter books published between 1945 and 1948, plus additional picture books. Pippi and other characters from Lindgren’s books also have been adapted in films and animated features.

Lindgren wrote many other children’s books that have been published worldwide in different languages, selling close to 150 million books worldwide.

Lindgren was honored on a 6-krone Swedish stamp in 1997 to help mark her 90th birthday (Scott 2175). Shortly after her death in 2002, a pane of seven 5kr stamps issued in booklet format honored Lindgren and six characters from her books, including Pippi Longstocking.