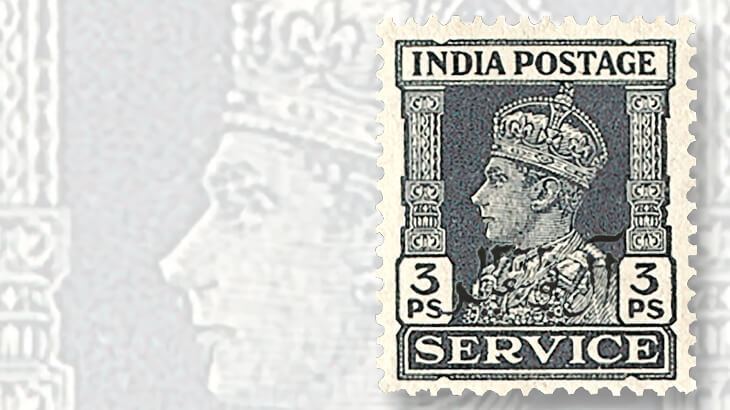 As we reported in our Nov. 11 Stamp Market Tips post, Muscat and Oman was a sultanate located on the southeastern end of the Arabian Peninsula, with coasts on the Gulf of Oman and the Arabian Sea.

The country, closely allied to Great Britain in the 19th and 20th centuries, is an absolute monarchy. The name of the country was changed to Oman in 1970, but Muscat remains its capital city. It has a land area of about 120,000 square miles, an extremely hot and dry climate, and a population of 4.5 million. Ibadhi Islam is the dominant religion, with small Sunni and Shia minorities, and even smaller ethnic Indian Christian and Hindu minorities.

Last week’s post tipped readers off to the values of 15 King George VI stamps of British India that were overprinted in Arabic script for use in post offices operated by the government of India in Muscat and Oman (Scott 1-15).

What about Official stamps?

On Nov. 20, 1944, 10 King George VI Official stamps of British India were also overprinted in Arabic script for use in Muscat and Oman post offices operated by the government of India (Scott O1-O10).

The set is currently selling in the $70-to-$80 price range in mint never-hinged condition. Sets in unused hinged condition are a good buy at around $35.

The set of 10 stamps is valued in used condition at $165 with the value in italics. However, this value only applies to stamps with identifiable Indian administration postmarks rather than later British administration cancels.

Don’t buy used examples if you can’t tell the difference in postmarks, or if they have not been expertized as Indian administration.