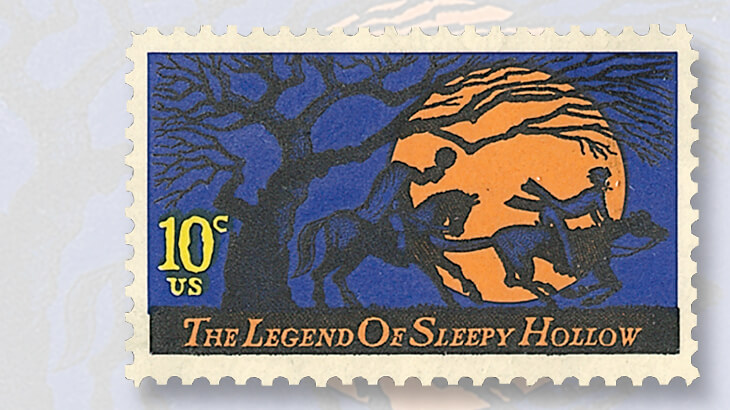 The 10¢ Legend of Sleepy Hollow stamp was issued in 1974, “in time for the stamps to be used with Halloween cards,” the Postal Service noted. 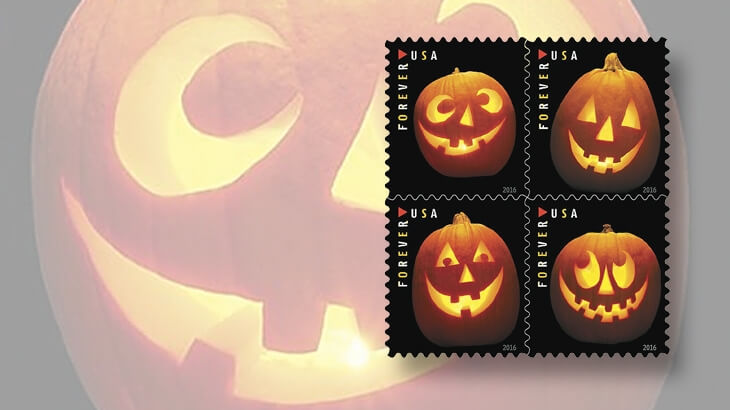 The United States Postal Service is expanding the reach of its Holiday Celebrations series in 2016. It will issue stamps within a week of each other to mark two holidays that have gone without specific U.S. postal commemoration in the past.

The Diwali forever stamp will be issued Oct. 5 for the joyous Hindu festival that celebrates the triumph of good over evil; details of the single Diwali stamp are still to come.

Before that, on Sept. 29, Americans will see four new stamps for Halloween, the Oct. 31 holiday that for many is a lighthearted celebration of the fear inspired by supernatural evil, just before the redeeming feast of All Saints’ Day on Nov. 1.

The stamps will be issued in a double-sided pane of 20, which the Postal Service calls a booklet.

Along with the double-sided pane available at post offices, the Postal Service will also offer the Jack-o’-Lantern set in press sheets consisting of six panes with die cuts (120 stamps) and selling through its Stamp Fulfillment Services division for face value at $56.40.

The nature of Halloween’s gentle scariness is reflected in these four new forever stamps, each picturing a different pumpkin carved with a grinning face that glows with an interior candlelight. The orange jack-o’-lanterns are set against a black background that reflects the annual night of fright.

“These creatively carved pumpkins have been symbols of Halloween in the United States since the late 19th century, not long after celebrations of the holiday began here,” the Postal Service explained in its stamp announcement. “These stamps are the first Halloween-themed stamps to be issued by the U.S. Postal Service. The jack-o’-lanterns were carved by Paul Montanari and photographed by Sally Andersen-Bruce. The stamps were designed by art director Derry Noyes.”

Though there haven’t been any other U.S. stamps directly celebrating Halloween, Washington Irving’s classic story The Legend of Sleepy Hollow has always been closely tied to the spooky holiday, and a 10¢ stamp commemorating the tale was issued a mere three weeks before Halloween on Oct. 10, 1974.

In its Philatelic Release No. 35 announcing the 10¢ Legend of Sleepy Hollow stamp, the Postal Service noted, “Nationwide distribution will be made in time for the stamps to be used with Halloween cards. Letter carriers deliver large numbers of Halloween cards each year.”

The first-day ceremony for the new Jack-o’-Lantern forever stamps will take place in Anoka, Minn.

According to the Halloween Stamp Unveiling page on Facebook (sponsored by the Anoka County Historical Society), festivities will begin at 10:30 a.m. with a plaza gathering at Anoka City Hall. The stamp ceremony will begin at 11 a.m., with an autographing session at 11:45 a.m. and sales of stamps and related merchandise at noon.

At 2 p.m. the town will celebrate the unveiling of a National Register plaque at the old post office.

According to the Minnesota News Network, “The central Minnesota city bills itself as Halloween Capital of the World.”

Even the Library of Congress acknowledges the title, proclaiming that Anoka is “one of the first cities in the United States to put on a Halloween celebration that discourages people from playing tricks or causing trouble.”

Collectors requesting first-day cancels are not to mail their requests to Anoka. The covers should be sent directly to Stamp Fulfillment Services in Kansas City; the full address can be found in the first-day cancel ordering instructions below.

The Postal Service offers this explanation about the origin of the jack-o’-lantern:

“Folklorists trace their name to a tale about a scoundrel named Jack who meets up with the Devil. Perhaps best known as an Irish legend, the story exists in myriad versions in Europe and North America: Jack tricks the Devil in unscrupulous ways that prevent him from going to Heaven but which also infuriate the Devil, who refuses to carry Jack’s soul to hell. With nowhere to go after he dies, Jack forever wanders the Earth with a lantern made from a hollowed-out turnip lit by an ember from the fires of hell, a fate that earns him the name Jack of the Lantern.”

Halloween is a holiday that has further characterized the conflict of good and evil, as neighbors hand out candy or other treats to good costumed children going door-to-door on Halloween night, while the threat of pranksters and vandals playing their tricks looms as well.

Technical details for the Jack-o’-Lanterns forever stamps also can be found below.

Standard ordering instructions apply. Collectors requesting first-day cancels are encouraged to purchase their own stamps and affix them to envelopes. The first-day cover envelopes should be addressed for return (a removable label may be used), and mailed in a larger envelope addressed to Jack-O’-Lanterns Stamps, Stamp Fulfillment Services, 8300 NE Underground Drive, Pillar 210, Kansas City, MO 64144-9998.

Requests for first-day cancels must be postmarked by Nov. 29.

The Postal Service’s set of four uncacheted first-day covers for the Jack-O’-Lanterns stamps is item 681416 at $3.64. USPS item numbers for stamps and FDCs also appear in Linn’s 2016 U.S. Stamp Program.