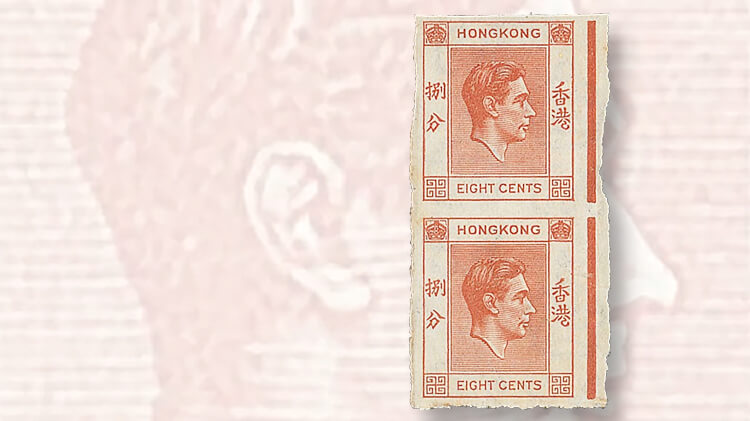 The Spink sale of the Cooper collection included an imperforate pair of the 1941 Hong Kong 8¢ definitive, which sold for $60,300. 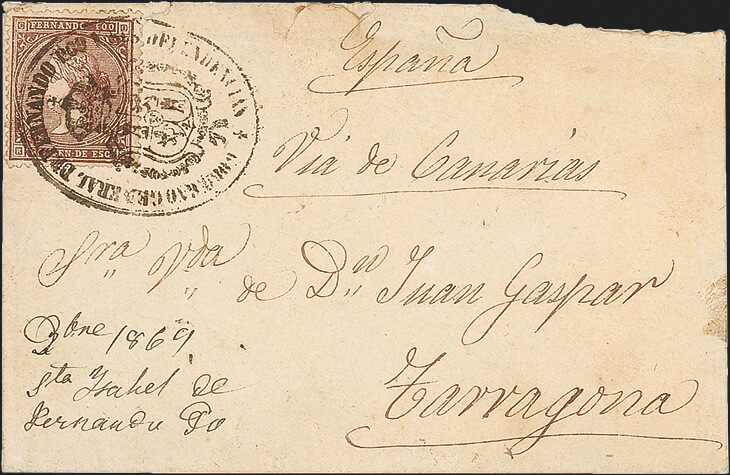 Rarely seen on cover, the first issue of Fernando Po on an 1869 cover sent from that island in the Gulf of Guinea to Spain sold for $25,600 at the Spink and Son sale in London last December. 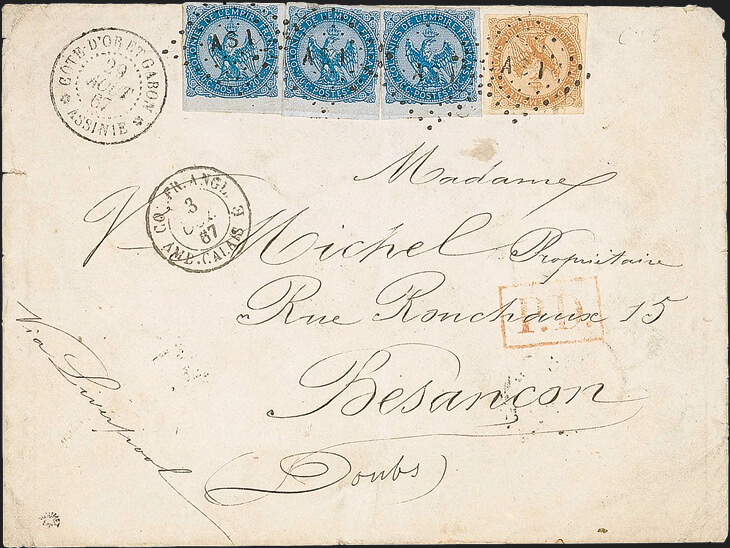 From the Sacher collection auctioned by Spink in London last December, a cover from the Ivory Coast to France franked with four Eagle and Crown stamps of the French Colonies sold for $33,000. 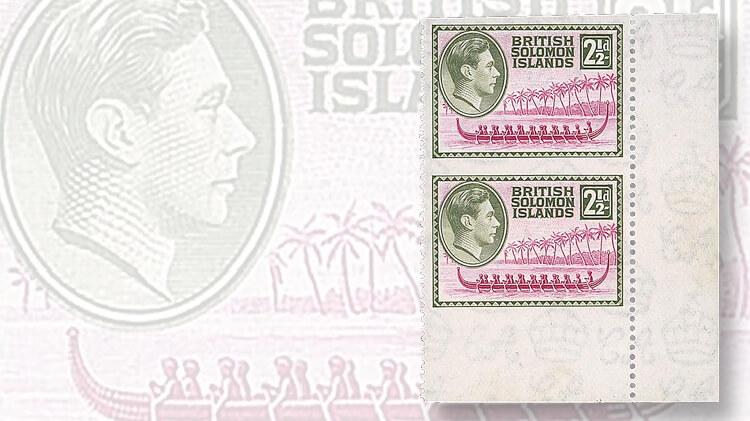 A horizontally imperforate pair of the 1939 Solomon Islands 2½d pictorial definitive, from the Graham Cooper collection, sold for $31,600 at the Spink and Son auction in December 2016. 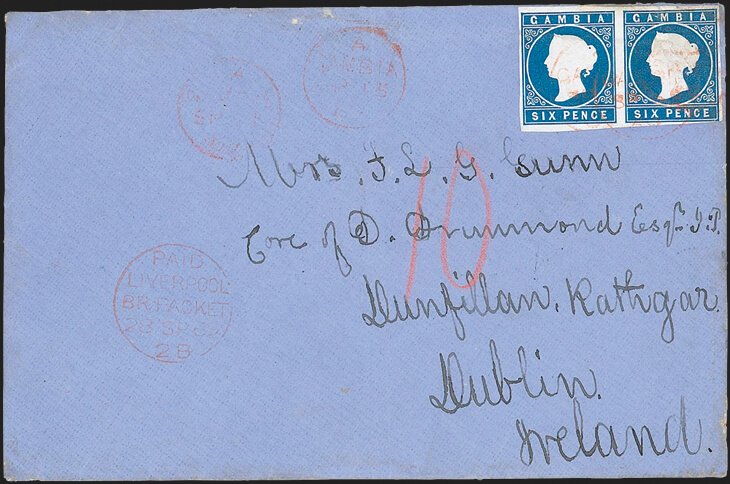 Spink and Son offered the Sacher collection of early West Africa postal history last December. An 1869 cover from Gambia to Ireland with a rare and early use of 6-penny Cameo stamps sold for $18,000. 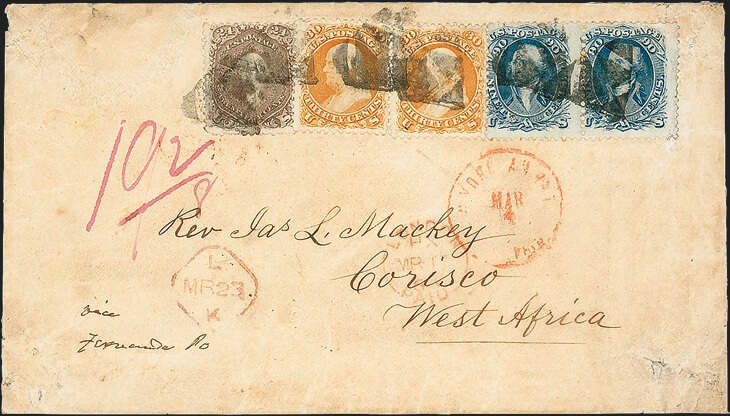 Last December, Spink and Son offered an 1865 cover with $2.64 in stamps of the 1861 issue (90¢ Washington pair, two 30¢ Franklins and 24¢ Washington) mailed from the United States to a missionary on the island of Corisco, West Africa. From the John Sac
Previous
Next

The 350-year-old auction firm Spink and Son held a pair of philatelic sales at its London headquarters in mid-December 2016, and a sale of Chinese and Asian stamps and covers at its Hong Kong offices on Jan. 15.

Sacher, who died last August, was a 50-year member and past president of the RPSL who wrote and presented extensively on 19th-century West African philately.

A cover sent in 1869 from Gambia to Ireland was franked with a pair of 6d Cameos from the imperforate, unwatermarked first issue (Scott 2). Called “an extremely rare and early usage,” the cover sold for $18,000, including the 20 percent buyer’s premium Spink adds to all lots.

A French colonial cover bearing a 10-centime Eagle and Crown stamp (French Colonies Scott 3) and a marginal strip of three 20c stamps of that issue (Scott 4) was described as a “rare and attractive franking.”

The stamps are canceled with the letters “ASI” in a lozenge of dots, indicating the early Ivory Coast settlement at Assinie. Alongside the stamps is the postmark “Cote D’Or et Gabon/Assinie,” together with other cancels marking its journey to Besancon, France.

A scarce relic of France’s precarious and often abortive early efforts to settle that part of West Africa, the cover sold for $33,000.

Fernando Po, the Spanish island in the Gulf of Guinea named for the 15th-century Portuguese navigator Fernao do Po, issued its first stamp in 1868. (The country name is spelled “Poo” on the early stamps of the colony.)

This stamp is rare on cover, according to Spink. A somewhat torn envelope, sent to Tarragona, Spain, via the Canary Islands in 1869, has a decent example tied by a government handstamp. It sold for $25,600.

Elobey, Annobon, and Corisco are tiny islands in the Gulf of Guinea that have been inhabited only intermittently throughout history. Corisco, with an area of just five square miles, was acquired by Spain in 1843 when it was inhabited by the Benga people.

A pair of the 90¢ Washington (Scott 72), two 30¢ Franklins (71), and a slightly faulty 24¢ brown-lilac Washington (70a) are tied by triangular cork cancels, with a red New York packet postmark below. Transit markings on the back indicate the letter probably went first to Southampton, England, and then from Liverpool to West Africa.

According to the Presbyterian Heritage Center website, the Rev. James L. Mackey was sent to Corisco as a missionary in 1850, together with his wife and another couple. Sadly, of the four, only the Rev. Mackey survived the first year.

The cover, authenticated on the reverse by old-time postal history expert Stanley Ashbrook, sold for $27,000.

Highlights included numerous rare and spectacular perforation errors. Cooper, who died in 2015, prided himself on owning “an example of virtually every George VI rarity with the exception of the Indian States and Japanese occupation issues.”

A corner imprint block of four of Australia’s 1951 7½d definitive (Scott 239), with the perforations absent from the left-hand stamps, was described as “the unique positional piece” of this error.

“One sheet purchased at a Sydney suburban post office early in 1952 had the first strike of the perforating comb omitted from the first vertical column of the left pane, resulting in ten stamps being imperforate on three sides,” according to the auction catalog. The mint block fetched $25,600.

Perhaps the most unusual imperforate-between error showed up in blocks of eight of New Zealand’s 1934 triangular semipostals, showing Princess (and future Queen) Elizabeth and her younger sister, Princess Margaret (Scott B22-B23). The upper-left pair of each block somehow missed being perforated in between. The blocks, both mint, went for $25,600.

The pride of Cooper’s collection was his imperforate pair of Hong Kong’s 8¢ definitive of 1941.

“One imperforate sheet was issued at Sai Ying Pun Branch Office in December 1946. Most were used as singles on letters to China. A mint vertical strip of five was however bought and divided into a strip of three and a pair (this lot),” noted the sale description. “A second strip, roughly torn into a pair and single is recorded.”