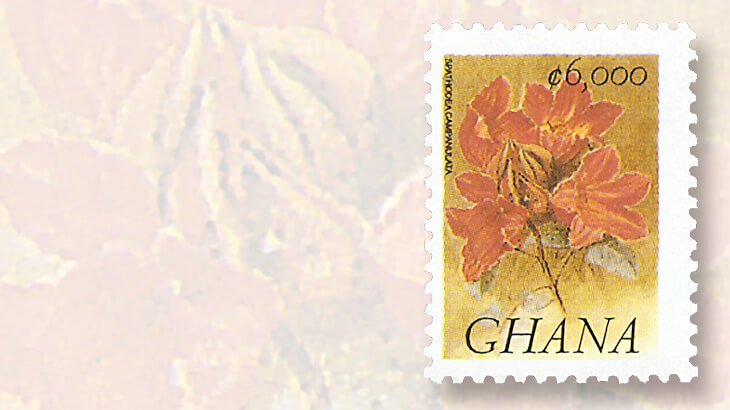 The Republic of Ghana, formerly the British colony of Gold Coast, is located in West Africa on the coasts of the Atlantic Ocean and the Gulf of Guinea. Ghana gained its independence on March 6, 1957, and became a republic in 1960.

Ghana has pursued a very robust stamp-issuing policy, with many colorful, well-designed, high-production-value topical stamps marketed aggressively to stamp dealers and collectors. Conversely, definitive stamps issued for postal use have sometimes gone unreported until they show up in the mailstream or in kiloware packets.

One such definitive issue with broad topical appeal is the set of 12 Fauna and Flora stamps (Scott 2524-2529) issued from 2003 to 2007. The stamps — with designs featuring plants, fungi, birds, butterflies, and fish — are sought by many topical collectors.

You are highly unlikely to find these stamps offered as a set, and we don’t know at what price they would be offered if you did. But keep your eyes open. These small definitive stamps could be easily overlooked in kiloware or loose stamp assortments. If you come across one or more of them, it would be a real find.