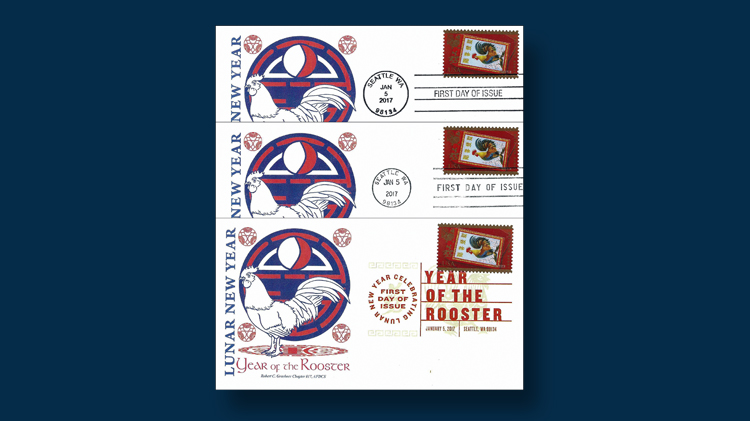 Three different types of first-day cancels for the same 2017 Year of the Rooster forever stamp: a rubber composition handcancel at top, a steel die-hub machine cancel on the center cover, and a digital color postmark at bottom.

The April 23 issue of Linn’s Stamp News just landed on the presses and goes in the mail to subscribers Monday, April 9. And if you subscribe to Linn’s digital edition, you’re at the head of the line with early access Saturday, April 7. Here are three stories we can’t wait to share with you.

Many collectors of United States first-day covers focus on the cachets. A smaller number are interested in the postmarks on the FDCs, and there are many collecting possibilities for recent issues in this area.

The close blood relationship of the royal families of Europe — particularly those royals descended from Queen Victoria of Great Britain — is widely known. But not as many people are familiar with the role of King Nicholas of Montenegro, who earned the nickname “the father-in-law of Europe.” Discover the stamps he and his relatives have been featured on in this issue.

In the Kitchen Table Philately column in each issue of Linn’s, E. Rawolik VI or E. Rawolik VII analyze the content of stamp mixtures offered to collectors. E. Rawolik, of course, is a pseudonym that is “kiloware” (a stamp mixture) spelled backward. This week, E. Rawolik VII reviews a $6 mixture of 600 “worldwide all different, off paper, mostly large/medium” stamps from Wtorek (Michigan). Find out if the purchase was worth the effort.

Lady Liberty on stamps: Inside Linn’s