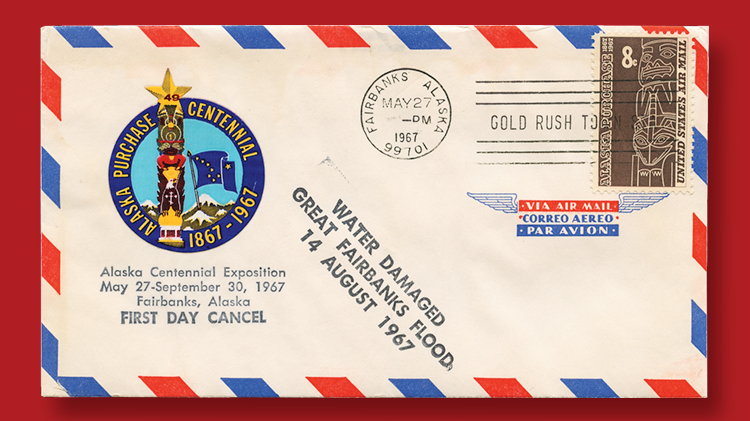 A comparison of the date of cancellation and the date of the handstamp on this 1967 Fairbanks, Alaska, cover reveals that the “water damaged, great Fairbanks flood” marking was added more than two months later.

When a cover is delayed or damaged in the mail it is often handstamped to indicate what caused the problem. That’s what I assumed had happened when I first saw the Fairbanks, Alaska, cover pictured nearby.

But no, this cover was “water damaged” two and a half months after it was canceled. The cancellation is dated May 27, 1967, and the handstamp is dated Aug. 14 of the same year.

What was the “Great Fairbanks Flood” noted in the handstamp? In July 1967, Fairbanks received 3.34 inches of rain compared to a normal total of 1.84 inches.

Fairbanks is on the Chena River, and the river was rising.

The July rains continued into August. After 6 inches of rain fell from Aug. 9-14, the river crested, and, on Aug. 15, the waters of the Chena spilled over its banks and into the city, flooding homes and businesses.

Damage was later estimated to be in the region of $200 million in 1967 dollars.

Who handstamped the cover: A collector? A retail establishment? I do not know the answer. But whoever it was, the damage to the cover was explained, and a routine cover became more interesting.