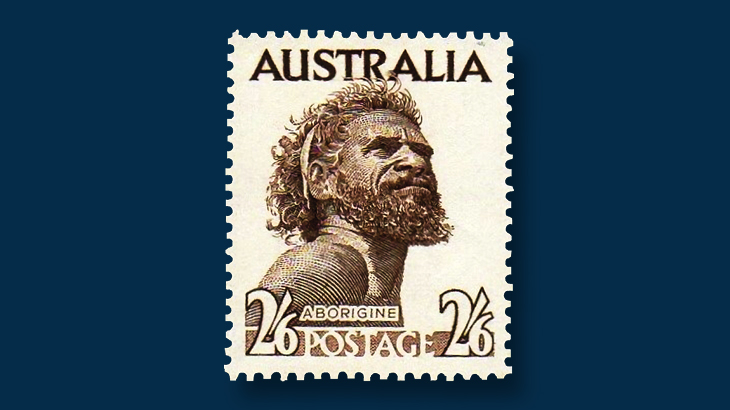 Gwoya Tjungurrayi, known as “One Pound Jimmy,” was photographed by Roy Dunstan in 1935 and first appeared on a 1950 Australia stamp. This 1965 variety was printed on unwatermarked paper.

The Feb. 12 issue of Linn’s Stamp News just landed on the presses and goes in the mail to subscribers Monday, Jan. 29. Here we entice you with a few previews of exclusive content available only to subscribers. And if you subscribe to Linn’s digital edition, you’re at the head of the line because you get early access Saturday, Jan. 27. To heighten your anticipation even further, we offer three glimpses of what lies between the covers of this issue.

People and culture of Australia’s indigenous tribes depicted on stamps

Over the years, Australia’s postal administration has issued many stamps that make it possible to learn more about the indigenous Australians. Stamps Down Under columnist Janet Klug explores some of these stamps.

In polar philately, ‘To strive to seek, to find and not to yield’

The greatest tragic figure of the heroic age of Antarctic exploration (circa 1897-1922) was undoubtedly Capt. Robert Falcon Scott, a man not well known in America but seared into the collective imagination of several generations in Britain. Great Britain Philately columnist Matthew Healey looks at philatelic items related to Scott’s story.