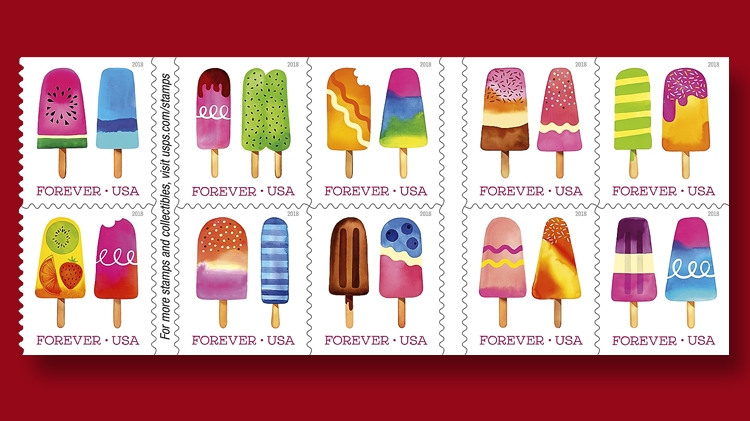 According to a May 21 press release from the United States Postal Service, its set of 10 different Frozen Treats forever stamps will be issued June 20 with a scratch-and-sniff feature.

A new surprise twist has been added to the upcoming United States Frozen Treats forever stamps scheduled to be issued June 20.

The stamps will be issued with a scratch-and-sniff feature.

The U.S. Postal Service announced May 21 that the new stamps with 10 design varieties “will add the sweet scent of summer to letters of love, friendship, party invitations and other mailings.”

No further information was provided about the type of scent that the stamps will carry.

The Frozen Treats stamp designs each show two “frosty, colorful, icy pops on a stick,” set against a white background. The watercolor illustrations are by California artist Margaret Berg, a native of South Africa who studied at Otis College of Art and Design in Los Angeles.

The stamps are being issued in a double-sided pane of 20, which the Postal Service describes as a booklet.

It’s the first time that the Postal Service has issued scratch-and-sniff stamps, where a scent is released if the surface of the stamp is scratched by a fingernail, coin or similar object.

The scratch-and-sniff stamp concept has been used in the past by other countries, including stamps with a chocolate aroma from Switzerland (Scott 1100), France (3682) and others; coffee-scented stamps from Brazil (2830), Colombia (1374b) and others; and many stamps showing flowers that have expressed a floral aroma.

A first-day ceremony will take place at 6 p.m. CDT in the Event Courtyard at the Thinkery Children’s Museum, 1830 Simond Ave., in Austin, Texas. The ceremony is free and open to the public.